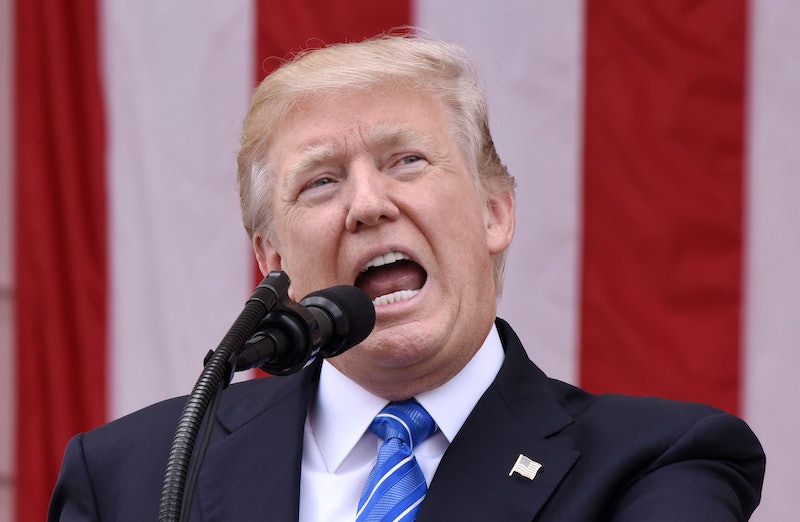 Even though the president's late-night, rage-filled tweeting is almost as ubiquitous as his MAGA hats, an exceptionally nonsensical tweet still managed to go viral Tuesday night. But what would be humiliating for a typical presidency is actually a blessing in disguise for the Trump administration. The president's "Despite the constant negative press covfefe" tweet has mercifully (for Trump) stolen attention from a decision that could have devastating effects on the environment for generations to come.

Trump's "covfefe" tweet inspired a slew of memes, as it remained up for many hours that evening. For some, the tweet was just another embarrassing communications moment for a White House that is quickly becoming known for them. Others used "covfefe" as a punchline about Trump's presidency, warning that covfefe is a preexisting condition not covered by Trumpcare, for example, or joking that the word is Russian for "I resign." For some, it was a rare cause for post-inaugural laughter.

And in a small way, the "covfefe" tweet matters. It is disturbing that the president is sending off incoherent, typo-ridden messages to the public. It's also deeply unprofessional. But, as is often the case with the Trump White House, there's a more important story going on today too.

Reuters reported Wednesday that Trump is planning to pull out of the Paris Climate Agreement, a United Nations pact designed to combat climate change. The president would not confirm Reuters' report, saying in a (non-covfefe) Twitter post that he would be announcing his decision "over the next few days."

If the United States pulls out of the Paris Agreement, it will join only two nations — Syria and Nicaragua — that have also refused to participate. The other member states of the United Nations have committed to the agreement, in which countries pledged to limit the greenhouse gas emissions that cause climate change.

The importance of the Paris Agreement is difficult to overstate. It aims to limit an increase in global temperatures to around three degrees Celsius, a range at which scientists believe the worst possible outcomes of climate change could be avoided. If greenhouse gas emissions continue to grow unchecked, global warming will increase faster, possibly causing natural disasters worldwide.

An increase of 3.6 degrees would be enough to cause an "irrevocable" future of extreme conditions, according to the New York Times. According to the National Resources Defense Council, these conditions may include catastrophic weather events like hurricanes, droughts, and heat waves, which could kill millions and render large parts of the world uninhabitable.

Moreover, dropping out of the agreement would represent a massive about-face for the United States, which under the Obama administration took the lead in negotiating the agreement to begin with.

"This would be a colossal mistake," former Secretary of State Nick Burns told CNN. "It would also devastate our international credibility. We are one of the two largest carbon emitters, with China. We are the ones who put this deal together. It is the first step to try to do something about climate change. For President Trump to take us out, it is anti-science."

During a presidency filled with damaging healthcare policies, diplomatic gaffes, and a major disregard for the environment, the tone on Twitter was pretty universal: I needed a laugh.

Others worry that an American exit would allow other superpowers, like China, to assume an enviable economic role. "This is a decision that will cede America’s role internationally to nations like China and India, which will benefit handsomely from embracing the booming clean energy economy while Trump seeks to drive our country back into the 19th century," Sierra Club Executive Director Michael Brune said in a statement Wednesday.

If the president does decide to quit the Paris Agreement, some American governmental institutions will continue the fight. New York City mayor Bill DeBlasio promised Wednesday morning that New York would continue to uphold the standards of the agreement. California has also taken the lead on fighting climate change on an international level. America may pull out of the climate accords, but many Americans will continue the fight.

The "covfefe" moment represented, in many ways, the best of Twitter — hours of funny, original jokes that ranged from absurdism to gallows humor. During a presidency filled with damaging healthcare policies, diplomatic gaffes, and a major disregard for the environment, the tone on Twitter was pretty universal: I needed a laugh.

Unfortunately, though, it's already time to let "covfefe" go and refocus on the enormous threat posed by an American withdrawal from the Paris Agreement. Our grandchildren will likely not, as some jokingly suggested, care about a midnight typo on social media — but they'll absolutely care about whether the United States tried to stop climate change before it was too late.

More like this
Watch Jacinda Arden’s Devastatingly Honest Resignation Speech
By Sam Ramsden
Eurovision Has Been Given A Whole New Look Ahead Of Its Liverpool Debut
By Bustle UK
This Is When Netflix Is Going To Start Charging You For Sharing Passwords
By Darshita Goyal
6 Organizations Fighting Police Brutality That You Can Support Right Now
By Syeda Khaula Saad and JR Thorpe
Get Even More From Bustle — Sign Up For The Newsletter
From hair trends to relationship advice, our daily newsletter has everything you need to sound like a person who’s on TikTok, even if you aren’t.