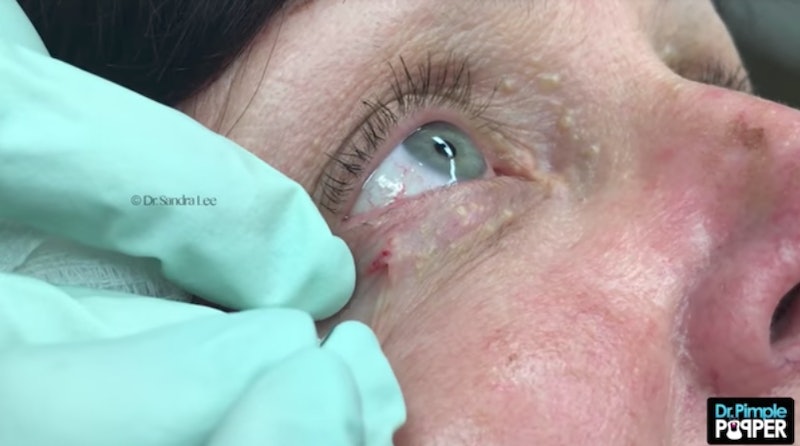 Let's be real. Videos of extractions performed by dermatologist Sandra Lee, M.D., have never been for the faint of heart. But Dr. Pimple Popper's latest video just may be the most cringe-worthy of all, and that's really saying something.

A moniker like Dr. Pimple Popper means removing blackheads, cysts, and of course, zits, is obviously the name of your game. With all of the poking and prodding going on in Lee's office, her viral videos are always an oozing, bloody mess that just makes you want to scream "ew, ew, ew." Nothing is ever off-limits for the doc, who seems to have truly seen and popped it all.

The pimple whisperer once popped a gigantic pimple for Hurricane Harvey relief. And there's no forgetting the time she removed a unicorn cyst that was too good to be true. It's all so gross, yet it's nearly impossible to look away. Yep, it's safe to say, Lee is responsible for the internet's disturbing fascination with pimple popping.

Now, fans get to freak out for the hundredth time, because Dr. Pimple Popper is back with a video that's so, so hard to watch. This time, she's taking her tools right to her patient's eye.

The video, entitled "One in a Million Milia," is just seconds shy of 22 minutes, so you'll have plenty of time to get squeamish while enjoying all of the popping action. It already has well over 900,000 views so there's no doubt about it: This will be another Dr. Pimple Popper video to reach viral status in record time.

If you're going to be watching the extraction process, you may as well have all of the facts. Dr. Pimple Popper has viewers covered in the video's description with a medical breakdown of the patient's condition.

"A milium is a small superficial cyst formed in the top layer of the skin called the epidermis," Lee writes. "They appear as tiny, pearly-white bumps just under the surface of the skin. They contain keratin (skin protein) and are harmless."

For something so "harmless," it all looks incredibly disturbing. Just from the still images, you can imagine popping tiny cysts on the eyelids would be painful.

The video begins by stating local anesthesia was applied to the affected area, or else "this would really hurt!". That was one hell of an understatement, considering a stab to the eye sans numbing cream would be hella excruciating.

It's really horrifying to watch as Dr. Pimple Popper attempts to banish each milium. According to the doc, these stubborn little boogers "are sometimes difficult to remove without a physician's help, since they cannot simply be squeezed out." Instead, the surface of the skin usually has to be pierced with a sharp blade or needle in order to successfully extract the milium. Bring on the ouchies!

It's quite difficult to watch the entire session. Needles near the eye balls? Randy Jackson said it best when he declared, "Yeah, it's going to be a no from me, dawg."

If you want to avoid ever having sharp objects poking anywhere near your eyes, it'd be wise to follow the doc's orders. According to Dr. Pimple Popper, milia can be prevented or minimized by exfoliating with chemical peels, microdermabrasion, or topical retinoids. So, never underestimate the power of a good exfoliant.

You'll just have to see for yourself — if you can stand to make it to the end of the video — whether or not Dr. Pimple Popper successfully removes each milium. It's definitely not an easy-peasy job, considering some of the cysts simply don't want to budge. Yeah, you're in for some wincing, hands-over-your-eyes, gasping action if you add yet another "view" to this trending video.