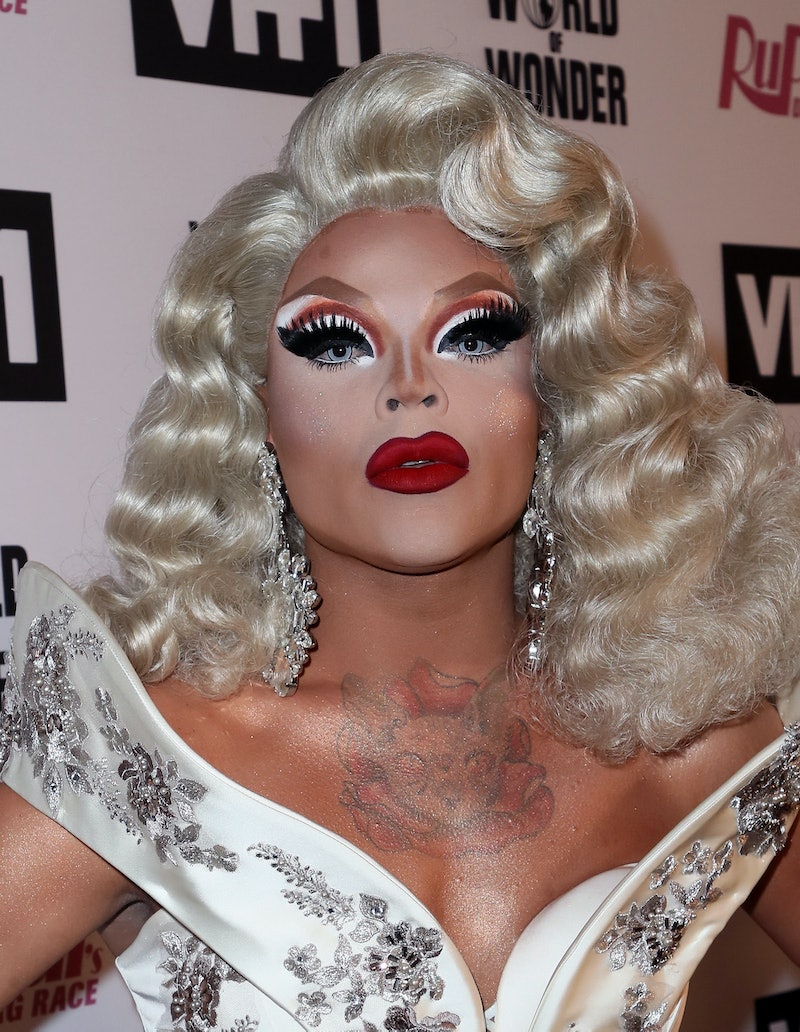 When she sashayed away from Season 10 proclaiming her own name, Drag Race queen Miss Vanjie had no clue she would return to the stage, let alone develop a "situationship" with Brooke Lynn Hytes, and ultimately have to lip-sync against her for a spot in Season 11's top four. Needless to say, it's been a whirlwind journey for Vanjie ever since her poorly constructed floral dress hit the runway last season. But despite her challenges, she says she's proud of how far she's come.

"I'm just more well rounded, because in the beginning, I was kind of just getting to know who I am as an entertainer and it was kind of new to me," Vanjie tells Bustle. "And then getting to travel and meet everyone does help you grow as a person, as a performer. Coming back I was more confident, more secure, and ... I wasn't like a deer in headlights. You know, it's just like riding a bike ... you take off the training wheels and then you go out and you're basically a professional. It was just being more confident and being more sure of who I was."

That confidence carried her all the way through Season 11 and into the top five, but that doesn't mean she didn't struggle. She escaped elimination multiple times after lip-syncing against Plastique Tiara and Shuga Cain, but ultimately, a nail-biting lip-sync against her love interest, Brooke, determined her fate. She says that once she found out who she was facing, she was scared.

"Brooke was one of the fiercest queens, like, even before Drag Race," Vanjie says. "So I was like, 'Oh f*ck, here we go.' But you know, when you're standing there and they're about to start the song, you kind of tap out of that. You just have to do the best you can do."

And Vanjie didn't back down. "I don't care who's on the other side of the stage," she said on the show. "There's nothing I want more than to be here." She gave her final lip-sync — to "Pride" by Aretha Franklin —everything she had, and if the final decision wasn't solely up to Ru, the judges may have given her another chance. She was so close to making it to the finale.

"I don't know what's worse, being sent home first or being so close and then leaving," she says. "It sucked, but I feel proud of myself. I can't dwell on the negative ... I try to remind myself of all the good stuff that happened," like getting closer to Brooke. She says they're still "doing great," by the way, although they're both busy performing on the road.

All in all, Vanjie says she's just glad she wasn't the first one to sashay away in Season 11. To her, that in and of itself was an accomplishment, and whether or not she won, she's created quite the Drag Race legacy. Sure, she may not be crowned America's next drag superstar, but becoming a viral meme might as well be the next best thing.

More like this
The 'Bachelor In Paradise' Schedule Shifts To 4 Hours Every Week After The Season 8 Premiere
By Brad Witter
Are Brandon & Serene Still Together After 'Bachelor In Paradise'?
By Kadin Burnett
Every ‘RuPaul’s Secret Celebrity Drag Race’ Contestant’s Identity Has Been Revealed
By Brad Witter
Confusion Reigns After Kanye Changes His Instagram Profile Pic To Kris Jenner
By Jake Viswanath
Get Even More From Bustle — Sign Up For The Newsletter