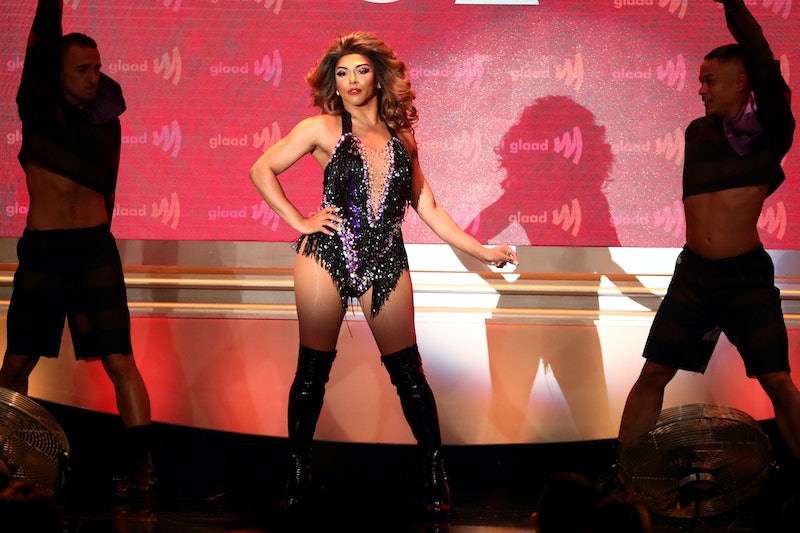 You've heard RuPaul's Drag Race legend and Cornacia inventor D.J. “Shangela” Pierce's magical moment on Thank U, Next. Now you can listen to the actual moment that led to Shangela’s cameo on Ariana Grande’s “NASA." This week, the A Star Is Born actor posted the audio recording that made its way into the introduction to the third song on Thank U, Next. The clip is a true present to us all. If it was any bigger of a present, it would pop up out of an enormous gift-wrapped cardboard box and scream "Halleloo!" at each and every one of us.

Alongside the snippet, she wrote,

“#tbt to that time @arianagrande played NASA for me in the studio and I was fully inspired to GO IN about my vision for doing it on a drag show, which led to this voicenotes recording which led to the track 3 opener. And now apparently NASA is gonna put her on the moon by 2024. did I mention I live?!? shout out to @frankiejgrande for inviting me to tag along & @tbhits for his and Ari’s extreme geniusness 🚀 #thankUnext”

The RPDR alum's vision, as we hear in the clip, involves “a clear bubble spacesuit” and “a very Neil Armstrong kinda [voiceover that says] ‘This is one small step for woman, one giant leap for woman kind.’”

"That's how the song is starting," Grande says. And sure enough, the final version of "NASA" would go on to feature Shangela's "This is one small step for woman, one giant leap for woman kind." You can listen to the recording here:

This collaboration was not something Ari and Shangela planned ahead of time, but something that came to be because the stars happened to align just so. One fateful evening, Shangela was hanging out with longtime friend Frankie Grande when Ariana, who was in the middle of making Thank U, Next, invited her brother to come by the studio. And then, Frankie invited Shangela to tag along. And then, Ariana played "NASA" for Frankie and Shangela. And then, Shangela helped her shape the beginning of the track.

“She’s like, ‘I’m gonna play you some songs from my new album,’ and she did and one of them was ‘NASA,’” Shangela recalled to Billboard back in February. “She was still working with the producer on the opening part of it — she's like, ‘Don't listen to that, just listen to the song.’”

When “NASA” ended, Shangela got right to dreaming up a drag performance set to the song. And because visionary recognizes visionary, Grande recorded Shangela’s impromptu brainstorm session. “She's like, ‘I love it so much,’ and she whips out her cell phone,” Shangela said in the aforementioned Billboard interview. “So I put it on her voicemail, just playing around, being very Shangela Laquifa.”

Before anyone could say "Because I'm what? Sickening," Shangela had a part on Grande's fifth album. As she told E! News earlier this year, Grande called her “a month or so later and was like, ‘How do you want to be credited on the album?’ And I was like, ‘Oh my god! You’re kidding me, right?!’ because you never know if these things are going to really happen, but it really happened and I was like, oh my gosh, I live! Halleloo!”

And the rest, as they say, is Halleloo-story.

More like this
Kathy Hilton’s 'RHOBH' Controversy Wasn’t Entirely Caught On Camera
By Jake Viswanath
Everything To Know About Taylor Swift’s 10th Studio Album, 'Midnights'
By Grace Wehniainen and Jake Viswanath
What Demi Lovato Really Thinks About Child Stardom, Depression, & Sobriety
By Radhika Menon
Kanye West Apologizes To Kim K "For Any Stress I Have Caused" In Rare Interview
By Jake Viswanath
Get Even More From Bustle — Sign Up For The Newsletter