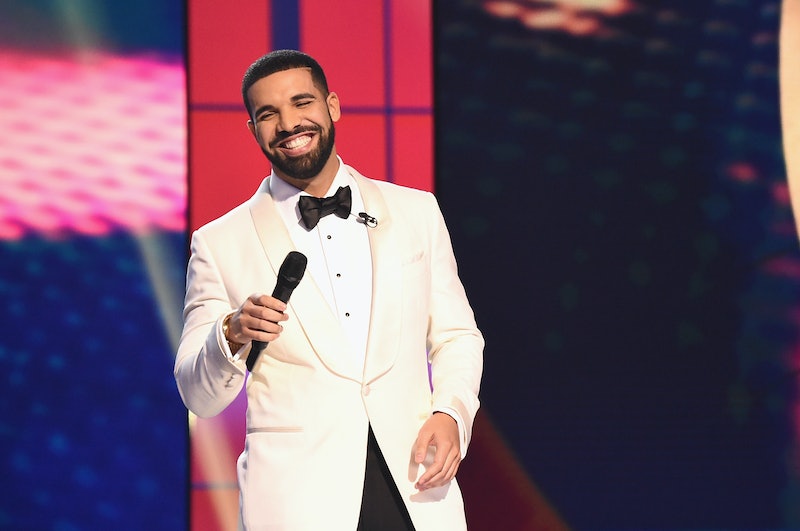 Unless you've truly been living under a rock for the past week or so, you probably know that Game Of Thrones' Arya Stark did a huge thing in the show's last episode. Everyone has taken note, and when I say everyone, I mean it. While accepting his first win at the 2019 Billboard Music Awards, Drake gave Arya a shoutout for being a total badass.

"Shoutout to Arya Stark for putting in that work last week," Drake said as he closed out his acceptance speech for Top Billboard 200 Album, which he won for Scorpion. It was the perfect use of his time onstage, really, because Game of Thrones is all anyone's been talking about lately. The HBO series is nearing its grand finale, and fans have been itching to find out how it will all end after waiting nearly two years for new episodes. It's the end of an era, and everyone, including Drake, can't stop thinking about it.

Lately, Arya has been at the center of the conversations. She's been a main character from the get-go, but in Sunday's episode, she took down the Night King. It was a huge deal, and even superstars like Drake are giving respect where it's due. See his comments here:

The moment immediately caught the attention of both Drake and Game of Thrones fans, but not everyone is happy that he mentioned Arya's name. Some even think that his well-wishes may have doomed the Stark daughter. According to Complex, Drake has a history of publicly supporting sports teams that subsequently tank the playoffs as soon as he shouts them out. If the "Drake curse" is real, it's definitely cause for concern for those those invested in Arya's safety. Some of Twitter's more superstitious users face-palmed when they heard Drake invoke her name.

Apparently the "Drake curse" is more widespread than I originally thought, and I should pay more attention to whether or not he supports any of my own favorite fictional characters. Hopefully the supposed curse doesn't apply here — Arya and actor Maisie Williams are a beloved part of Game of Thrones, and especially after she took down the Night King, people would be devastated to see her go.

But perhaps a big, unexpected move is what Game of Thrones will gun for, especially since some have criticized the much-anticipated Battle of Winterfell as underwhelming. And there are plenty of viewers that think Arya is definitely not safe.

The Hollywood Reporter's Josh Wigler wrote that "I feel more strongly than ever before that my preseason prediction will come true: Arya Stark will die either at Cersei's command or at Cersei's own hands." But on the flip side, some speculate that Arya is the dark horse winner to end up on the Iron Throne.

No one really knows what's coming down the pike on Game of Thrones, but maybe someone should ask Drake. Regardless of what happens, Drake's speech was just further proof that the show is infiltrating every single aspect of pop culture; even a musical awards show completely unaffiliated with HBO has vocal GoT stans on-air.