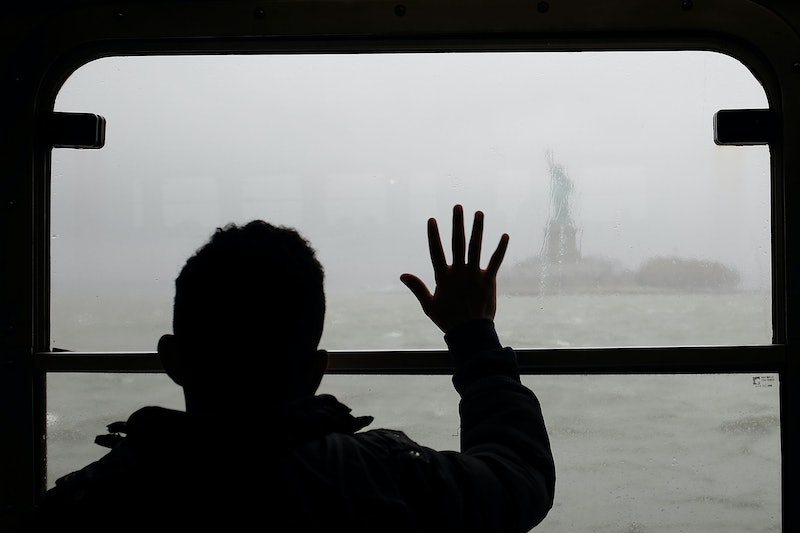 President Donald Trump signed an executive order on Friday immediately suspending all refugee admissions into the United States for 120 days. The order indefinitely closed the country to Syrian refugees and blocking citizens of Iran, Iraq, Libya, Somalia, Sudan, Syria, and Yemen from entering the country for 90 days even if they hold a valid green card. For many, the president's executive order seemed to be a direct violation of America's longstanding tradition of offering refuge and opportunity to those fleeing war, persecution, and strife. But while President Trump may be seeking to close the door on those in desperate need of assistance, there are still ways you can help support refugees right now.

At the base of the Statue of Liberty you will find a plaque that reads, "Give me your tired, your poor, your huddled masses yearning to breathe free, the wretched refuse of your teeming shore. Send these, the homeless, tempest-tossed to me, I lift my lamp beside the golden door!" Both the plaque and the Statue of Liberty herself are meant to serve as welcoming beacons of hope and freedom to immigrants arriving in America. But while Trump appears to have missed the meaning behind lady Liberty's message, there's no reason you can't carry it forward.

Whether you choose to donate your time, your money, or your voice, help is needed now more than ever. Although you may feel powerless now that Trump has temporarily halted the resettlement of refugees and effectively banned Muslim refugees from admission, there are still many effective ways to help refugees both around the world and in the United States. Here are six ways you can take action today:

While monetary donations may not be feasible for everyone, donating to a reputable charity organization can be an effective and easy way to help those in need. And every little bit helps, so there really is no such thing as a donation that's too small. The list of effective organizations who help refugees around the world and in the United States is extensive, meaning the most difficult aspect of donating might just be choosing where to send your contribution.

You've probably heard of UNHCR, UNICEF, Mercy Corps, the International Red Cross, the International Rescue Committee, and Save The Children. They are all working to aid refugees in Syria and around the world. But the list doesn't end there. Catholic Relief Services is currently providing food, shelter, medical assistance, hygiene and living supplies, and education to more than 700,000 Syrian refugees. The Migrant Offshore Aid Station organizes professional search and rescue operations for migrants in distress at sea. Small Projects Istanbul is a charity group helping Syrian refugees build new lives in Istanbul, Turkey, by providing education services, community support, and craft skills training to help women earn a livelihood. Basmeh & Zeitooneh is a local organization that helps Syrian refugees in Lebanon.

You may also want to consider donating to organizations like the American Civil Liberties Union (ACLU) and the National Immigration Law Center, which are focused on tackling the complex legal aspects related to Trump's executive order. The ACLU filed a lawsuit Saturday against Trump's Muslim ban.

Although organizing a fundraiser sounds like a lot of work, it can actually be done quite easily. Imagine if instead of simply donating the $10 you've managed to scrape together you convinced 99 other people to donate $10 with you? You'd have raised $1,000. If you'd rather not run your own fundraiser (AKA making sure individual donations made to you make it to the charity of your choice), Mercy Corps (an international charity rated three out of four stars by Charity Navigator) has made it easy to start a fundraiser specifically for Syrian refugees or for those all around the world attempting to survive crisis via their website. You can also create your own fundraiser through the International Rescue Committee, or through Shelterbox, a charity that provides emergency shelter and supplies to communities around the world that have been affected by conflict or disasters, or for the

Once you've set up your fundraiser, reach out to your friends, family, neighbors, co-workers, social media followers, Uber driver, literally everyone about what you're doing. Tell them what it is that's motivated you to donate and why you hope they'll join you. Take your fundraiser a step beyond email and social media by hosting by a party, a poker game, or, if your friends are really outgoing, a karaoke showdown, and ask everyone who attends to consider making a small donation.

Reach Out To Refugees Already Resettled In The U.S.

Your time is just as valuable as your money and there may be no better time to extend a welcoming hand to refugees already resettled in the U.S. than now. As Trump turns his xenophobic rhetoric into executive action, it's important to show refugees (and green card holders) that they're not alone.

The International Rescue Committee has at least 27 resettlement offices spread across 15 different states. Check and see if there's an office near you and then contact them about ways you can help provide support for refugees resettled in your area.

Those local to New York City or Washington, D.C., might be lending their time and talent to HIAS. The organization is seeking people to volunteer as conversation partners to help newly resettled refugees practice their English-language skills. The group also welcomes pro-bono legal assistance and interpretation and translation help.

In Austin, Texas, SARA Organization provides a variety of support and services to newly resettled refugees. Volunteers are needed for tutoring and mentoring children, teaching vocational and professional skills to adults, career counseling, and more.

Put The Pressure On Paul Ryan

When Trump first raised the idea of banning Muslims from entering the U.S., House Speaker Paul Ryan said he did "not think it is reflective of our principles, not just as a party but as a country." Yet Ryan has been conspicuously silent since Trump signed his executive order Friday. Add your name and thoughts to Mercy Corps' petition urging Ryan to lead Congress in telling President Trump to revoke his executive order to suspend refugee admissions.

You might also consider adding your name to this petition urging Trump to rethink his action on suspending the U.S.' refugee resettlement program on MoveOn.org.

Once you've let House Speaker Ryan know how you feel about Trump's executive action of refugees, reach out to your congressional representatives and ask them to vocally oppose Trump's order if they haven't done so already. (If they have, thank them.) You can find the contact information for your senators here while the information for your representative in the House can be easily obtained here.

If you've never contacted your congressional representative before and are feeling a little bit nervous about what to say, the International Rescue Committee is offering help with talking points via a script that can help you get the conversation about Trump's executive order started.