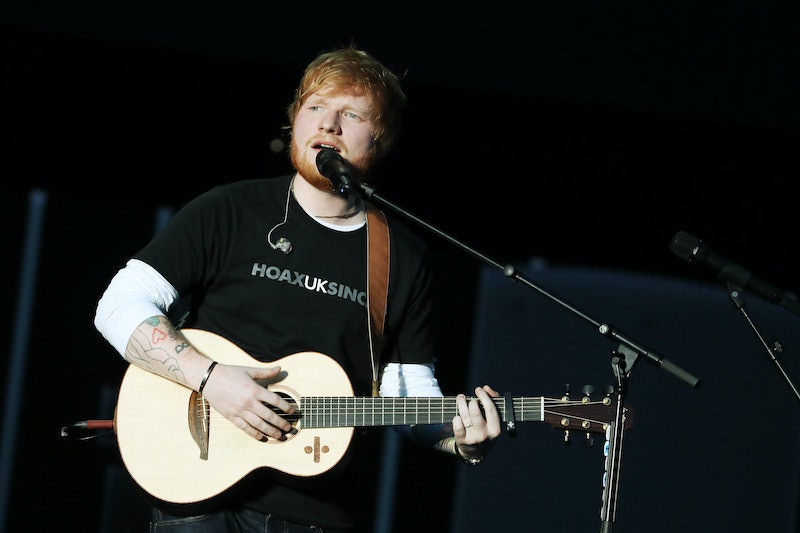 Today in seriously bad ideas that should never happen: Ed Sheeran almost made an all-male version of "Lady Marmalade." In a video interview with Charlamagne Tha God, Sheeran said he had a "silly idea" to put his own masculine twist on the '70s classic from LaBelle that asked the question, "Voulez-vous coucher avec moi, ce soir?" You know, the song that later got a Moulin Rouge remake in 2001 featuring Christina Aguilera, Pink, Lil' Kim, and Mýa. Still, all silly ideas aside, Twitter was quick to tell Sheeran what they hoped he already knew, that the world only has room for one remake of this song.

In a new interview from his house in Suffolk, England posted to his YouTube channel, Sheeran talked to Charlemagne about his No. 6 Collaborations Project, which has him teaming up with some of his favorite artists including Justin Bieber and Chance The Rapper. He also revealed the rather odd inspiration for the project, which he told Charlemagne isn't an album, but a "compilation of artists that [he's] a fan of."

“This project actually started with one idea I had which was – you remember 'Lady Marmalade' right? This is such a silly idea – I had an idea of doing that," Sheeran told the radio personality, "like you could get Bruno [Mars], Bieber and me on a record, how fun would that be?"

Now, that might be where this story ends, but no, Sheeran actually took the steps to make this dream a reality. Luckily or unfortunately, depending on where you side on this debate, the boys never actually went to the studio to record "Lady Marmalade." I'd personally like to think it's because they couldn't find their Lil' Kim, but based on Sheeran's story, it sounds like it's all thanks to Bruno Mars, who would be the Christina Aguilera in this scenario, obvi.

"The first person I rung was Bruno and he was just like 'let's just do a song together, just us' and that’s how it happened," Sheeran said of the No. 6 Collaborations Project. "So then I did a song with Bruno and I did a song with Bieber and these individual songs started happening and then it turned into a project…It was a really good experience putting the record together.”

While there will be no "Lord Marmalade," at least for now, Twitter still couldn't help but let Sheeran know how they felt about this terrible, horrible, no good, very bad idea of his. One person even went as far to call it "without a doubt the worst thing i have ever read on the internet." At least for today.

Another fan wanted to go all Khaleesi on Sheeran's cover song idea. While someone else brought out an important RuPaul's Drag Race gif to get their point across.

Another couldn't believe anyone would try to put another twist on this classic. "ew no, lady marmalade can’t be replicated," a user named @imthehonestboy tweeted and as their name implies, it's hard to disagree with them on this one.

It turns out, Sheeran might have realized that, too with a little help from Mars.

More like this
Craig David Is Still Slicker Than Your Average
By Olivia-Anne Cleary
The Spice Girls Just Dropped A Brand New Music Video
By Sam Ramsden
Ed Sheeran’s Surprise Gig Included An Iconic Britney Spears Tribute
By Bustle Editors and Darshita Goyal
Everything To Know About Taylor Swift’s 10th Studio Album, 'Midnights'
By Grace Wehniainen and Jake Viswanath
Get Even More From Bustle — Sign Up For The Newsletter