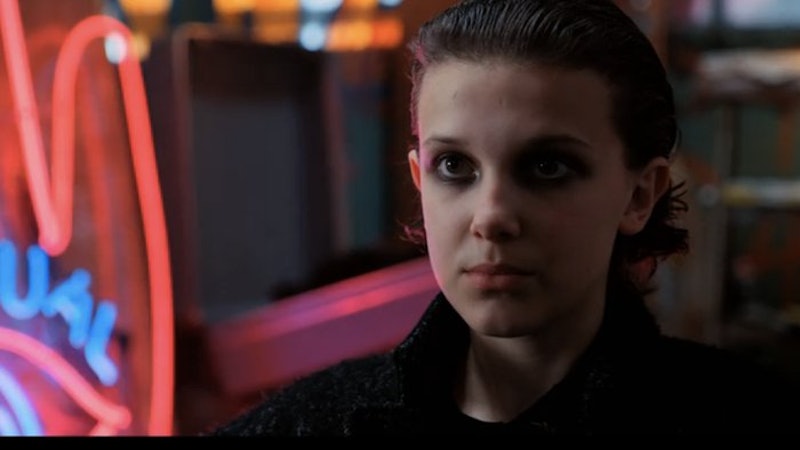 Good television shows are impossible not to talk about. The really good ones leave you desperate to discuss them with your mom, your partner, or your dog who hasn't responded to you yet but you're somehow sure is invested in the plot, too. You can't help it. The second season of Stranger Things is one of those shows. The newest installment of the fan favorite Netflix show has only been streaming since Oct. 28, but if you're a fan, odds are you've already chatted about it with your friends.

This season's plot line focuses heavily on Eleven exploring her own identity independently (something that she's never had the option to do before), but not all episodes support a theme of a badass Eleven having agency over her own choices. One of the most positively talked-about scenes in Season 2 is a makeover montage in which Eleven goes from donning nondescript hand-me-downs to slicked-back hair, jet black eye makeup, and an overall "punk vibe." People loved it. But not one of those style choices were actually hers. And that's a problem.

Spoilers for Stranger Things Seasons 1, 2 ahead.

From the very first episode of Stranger Things, Eleven's utter lack of control over her own choices has been in focus. In Season 1, we all became familiar with the fact that most of Eleven's early life was spent being held captive by "Papa," a scientist who performed experiments on her, tortured her, and kept her separated from the outside world. Even when she escapes him, Eleven ultimately winds up being hidden away by Mike. Despite the fact that Mike eventually becomes her close friend, Eleven still found herself in a situation where she essentially wasn't allowed to make her own choices. In the beginning of Season 2, Eleven is still on the run from the "bad men" who worked with Papa, so Hopper hides her away in the woods, forbidding her from communicating with Mike or anyone else. Although both Hopper and Mike hid her for her own safety, the theme of Eleven's choices being taken away from her by men remains the same throughout all of Season 1, and the beginning of Season 2, as well.

No matter how well taken care of she is, she's still stripped of her ability to choose who she wants to see, where she wants to go — how she wants to live. Despite the fact that Eleven knows what dangers the outside world holds, and can protect herself arguably better than any man (she does have deadly supernatural abilities, after all), when she wants to go outside, Hopper won't let her. Regardless of positive intentions, even the men in her life who she trusts ultimately strip her of her independence to make choices. This happens repeatedly until she finally decides to leave the "protection" of being hidden, disobey a few rules, and run away.

While the idea of Eleven escaping and going out on her own to find answers about her mother, her "sister," and herself is one that's certainly positive in theory, what actually happens is somewhat troubling. Framed as the highlight of the time spent with Eleven's aforementioned sister and friends, the makeover scene is set to an upbeat, techno song. In a fairly dark episode, the makeover is a bright spot until you take a step back and think of it in the context of Eleven's past.

Then it becomes unsettling. Eleven is sat down in a chair, her head is tilted back, and someone else slicks her hair straight back. Someone else applies black makeup to her eyes and lips (which she tries to wipe off, a nod to the fact that these styling choices are certainly not hers). Someone else chooses what she wears. Someone else looks at her after it's all done and says, "Bitchin'." Now one of the most iconic lines from the season, Eleven looks back and repeats the comment. "Bitchin'." Not even the response to the makeover is really hers.

As most stereotypical makeover scenes in television and film are, there is something satisfying and fun about the transformation. There's a reason these types of scenes are in almost every show or movie you've ever seen. Seeing a different side of a character can be exciting. It's entertaining, plain and simple. And even though the idea of Eleven's badass persona matching a badass style is fun, and should be fitting, something about this makeover felt off.

Here was Eleven exploring her independence, and finally taking agency over her own life decisions (for better or for worse), but the most seemingly beloved part of the entire episode doesn't even feature choices made by Eleven at all. While we could have easily been given a makeover scene that enabled Eleven herself to make those choices, instead they were all handed over to someone else. Yet again, people who weren't Eleven were making choices about her body, and telling her how she felt about it.

As the season progressed, it became clear that Eleven's sister and her friends weren't necessarily what Eleven wanted in her life, despite whatever she thought in the past. She leaves them, in a win for independent Eleven. But the hair, the clothes, and the makeup remained. When reunited, Hopper comments on the new look, even touching on the fact that he knows those clothes and makeup aren't really of her choosing. In what seems like a concerted effort to be supportive, he eventually says he likes it, and Eleven simply replies, "Bitchin'." It's a charming moment in a dark, twisted part of the season. But I couldn't help but go back to the fact that what I wanted, and what was missing, was an Eleven "makeover" that was entirely hers. One where she was given the space to decide what was "Eleven" and what wasn't, rather than that choice being handed to someone else — even if think they have her best interest at heart.

The season ends with a flash-forward to Eleven a month later, and she's wearing something that's not quite any style we've seen for her so far (and certainly isn't punk), so it's more than likely that in future seasons she will continue to develop her personal style. But the style itself isn't really the point. After all, it's never been entirely clear on the show whether or not Eleven likes hair, makeup, or clothes at all.

Since this new style has been forced into Eleven's narrative, it can't be praised as something inherently badass or "bitchin'," no matter how good you think she looks with slicked back hair. Ultimately, these makeovers can't really be celebrated until they reflect the same point the show is trying to make: that people's choices should always be their own.