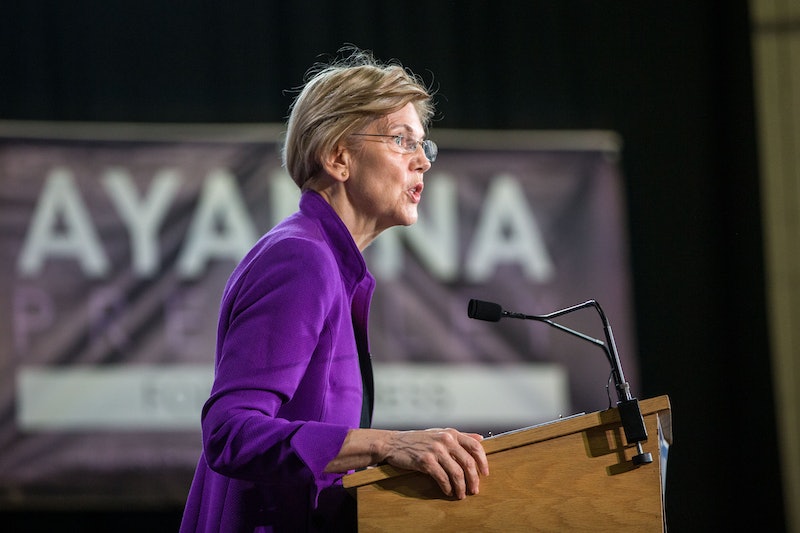 At a Saturday town hall in Massachusetts, Democratic Sen. Elizabeth Warren said she's considering a presidential bid after the 2018 midterms. According to a tweet by her campaign, a schoolteacher named Marty asked Warren about a potential 2020 run at an event in Holyoke.

CBS News reported Warren's announcement is the first time she's publicly stated a desire to run for president. Warren was first elected to the Senate in 2012, when she beat Republican Scott Brown.

"I love my job. It is the honor of a lifetime to have the chance to go to Washington to fight on the behalf of the people of this state," Warren said, according to the video. "And I am so deeply grateful to every one of you who helped elect me in 2012."

That's why Warren's campaign donated to state Democratic operations in all 50 states in March, according to HuffPost. "I understand the importance of the majority. I understand, and I'm a team player," Warren said at the town hall. "You don't get what you don't fight for."

Warren again voiced her anti-President Trump sentiments. "But let's face it: Donald Trump is taking this country in the wrong direction. Working people have taken one punch to the gut after another," she said at the town hall. "And I am worried down to my bones about what Donald Trump is doing to our democracy."

But beyond Trump's tenure, Warren said last week's hearings with Dr. Christine Blasey Ford and Judge Brett Kavanaugh in front of the Senate Judiciary Committee were a motivating factor for her.

"Washington was broken long before Donald Trump ever got there. Then this week, I watched 11 men who were too chicken to ask a woman a single question. I watched as Brett Kavanaugh acted like he was entitled to that position, and angry at anyone who would question him," Warren said, according to the video. "I watched powerful men helping a powerful man make it to an even more powerful position. I watched that, and I thought, 'Time's up.'"

Warren said it's time for a woman president. "It's time for women to go to Washington and fix our broken government," she said. "And that includes a woman at the top."

Warren then addressed where she stands on 2020 bid. "So here's what I promise. After Nov. 6, I will take a hard look at running for president. I think we can do, I think we can turn this country around," Warren said.