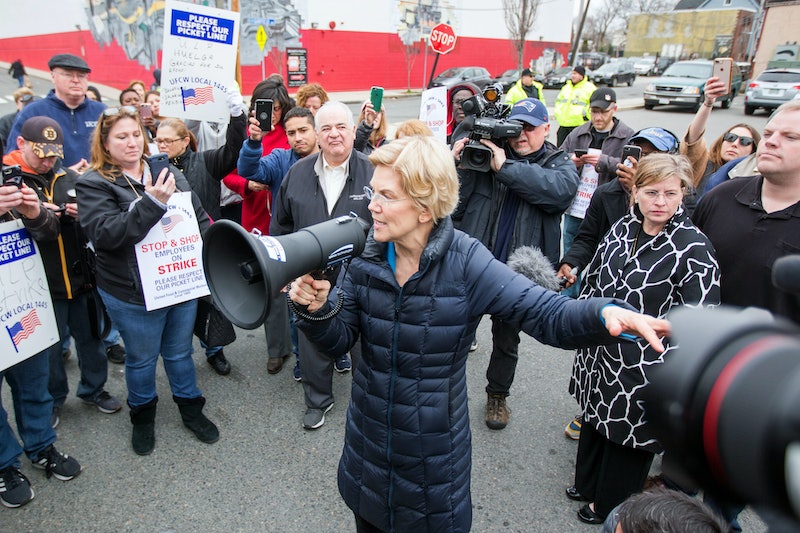 A day after Robert Mueller's report on Russia's election interference and possible obstruction of justice by the president was released, Sen. Elizabeth Warren said impeachment proceedings against Trump should commence in the House of Representatives. In a series of tweets, Warren argued that Congress has a "constitutional duty" to impeach Trump, given what Mueller uncovered in his investigation.

Here's what Warren said, in full:

The Mueller report lays out facts showing that a hostile foreign government attacked our 2016 election to help Donald Trump and Donald Trump welcomed that help. Once elected, Donald Trump obstructed the investigation into that attack.

Mueller put the next step in the hands of Congress: “Congress has authority to prohibit a President’s corrupt use of his authority in order to protect the integrity of the administration of justice.” The correct process for exercising that authority is impeachment.

To ignore a President’s repeated efforts to obstruct an investigation into his own disloyal behavior would inflict great and lasting damage on this country, and it would suggest that both the current and future Presidents would be free to abuse their power in similar ways.

The severity of this misconduct demands that elected officials in both parties set aside political considerations and do their constitutional duty. That means the House should initiate impeachment proceedings against the President of the United States.

It's worth noting upfront that Mueller did not recommend that Trump be indicted for obstruction of justice. However, Mueller wrote that this was largely because the Department of Justice's Office of Legal Counsel (OLC) had previously determined that sitting presidents can't be indicted as a matter of course. Mueller's team abided by this guidance when it began the investigation.

"Given the role of the Special Counsel as an attorney in the Department of Justice and the framework of the Special Counsel regulations," Mueller wrote, "this Office accepted OLC’s legal conclusion for the purpose of exercising prosecutorial jurisdiction." Because of that, Mueller wrote, his team "determined not to apply an approach that could potentially result in a judgment that the President committed crimes."

Moreover, Mueller made it very clear that the facts uncovered in his investigation did not exonerate Trump.

"[I]f we had confidence after a thorough investigation of the facts that the President clearly did not commit obstruction of justice, we would so state," Mueller wrote. "Based on the facts and the applicable legal standards, however, we are unable to reach that judgment."

Mueller also alluded several times to the fact that Congress has the authority to impeach a corrupt president. In addition to the quote Warren cited, Mueller also said that making "a federal criminal accusation" against Trump, given the OLC's previous legal guidance, could "potentially preempt constitutional processes for addressing presidential misconduct."

"The conclusion that Congress may apply the obstruction laws to the President's corrupt exercise of the powers of his office accords with our constitutional system of checks and balances and the principle that no person is above the law," Mueller wrote.

Impeachment proceedings must begin in the House of Representatives, however, and Speaker of the House Nancy Pelosi hasn't yet committed to initiating them.

"As the Speaker has said repeatedly, one step at a time," a spokesperson for Pelosi told NBC News. "We’re focused on getting the full unredacted version of the report and its underlying documents — as well as hearing from Mueller. The report raises more questions and concerns that we believe the American people deserve answers to."