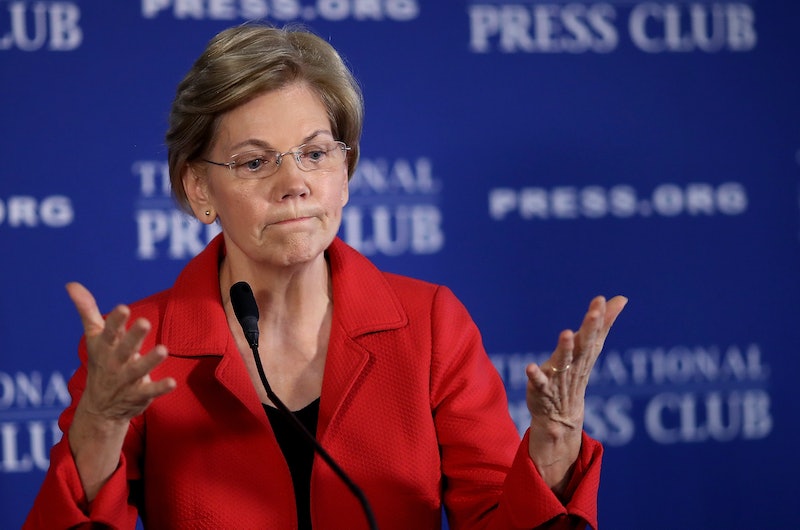 As the buzz around Wednesday's anonymous opinion piece sharply criticizing the president grows, some people in government are questioning what other steps should be taken. On Thursday, Massachusetts Sen. Elizabeth Warren demanded the New York Times op-ed author "do their job," by using a constitutional provision to remove the president from office, reports CNN.

"If senior administration officials think the President of the United States is not able to do his job, then they should invoke the 25th Amendment," she told CNN. Warren is referring to Section 4 of the 25th Amendment of the Constitution, which lays out a process by which cabinet members can remove a president from office if he or she is "unable to discharge the powers and duties of his office." That phrase is generally interpreted to include situations in which the president is impeached, dies, resigns, or is otherwise incapacitated.

The author of the op-ed wrote that White House staffers have been "working diligently from within to frustrate parts of [Trump's] agenda and his worst inclinations," including that they regularly act to rein in the president's "erratic behavior," and "keep bad decisions contained to the West Wing." Adding to reports of White House chaos, and the efforts of aides to temper the president's actions, The Washington Post released excerpts of journalist Bob Woodward's book Fear this week. Among other reveals, Woodward wrote that former aide Gary Cohn at one point "stole," a letter of intent to withdraw from a South Korean trade deal off of Trump's desk, to prevent him from signing it. Trump has vehemently denied the claims made in both Woodward's book and the Times' op-ed.

In the flood of recent opinion pieces analyzing Wednesday's anonymous op-ed, many have suggested that the unnamed author's primary goal wasn't to reassure the public of efforts to keep the White House working effectively. Instead they say, the writer is looking to justify his or her decision to remain a part of the administration, instead of resigning and publicly criticizing the president afterward.

According to Warren, however, staying a part of the staff requires more than anonymously writing reassurances. "What kind of a crisis do we have if senior officials believe that the President can't do his job and then refuse to follow the rules that have been laid down in the Constitution?" she told CNN. The anonymous official, in fact, addressed the provision in their letter, writing, "there were early whispers within the cabinet of invoking the 25th Amendment," but that they had ruled it out to avoid "precipitat[ing] a constitutional crisis."

"It's time for them to do their job," she said.