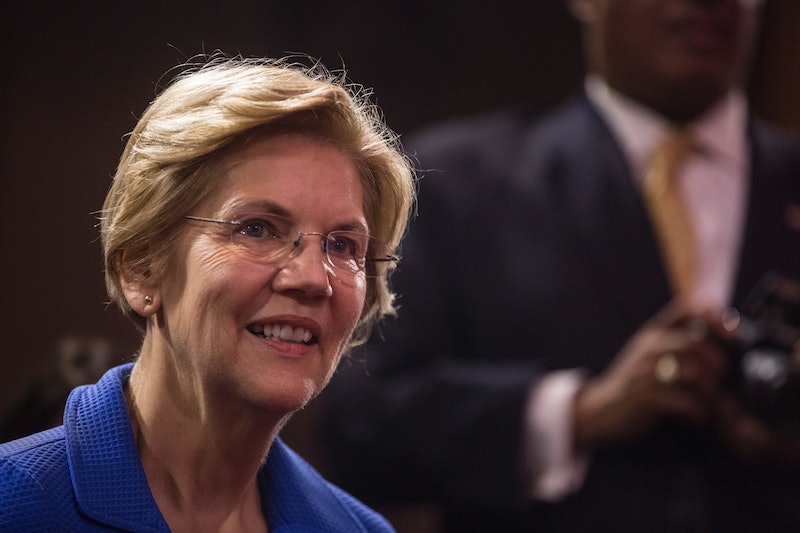 While higher education is free or very inexpensive for students in many countries across the developed world, it still seems like an unattainable situation in the United States. Elizabeth Warren's new plan for universal free public college and student debt forgiveness for the majority of people who hold it, though, argues that it wouldn't actually be impossible to get there.

Warren released her proposal to provide universal free public college and to cancel student loan debt for millions in a Medium post on Monday morning.

"Student loan debt is crushing millions of families," Warren tweeted, introducing her plan. "That’s why I’m calling for something truly transformational: Universal free college and the cancellation of debt for more than 95% of Americans with student loan debt."

Specifically, Warren's plan calls for $50,000 worth of student loan debt relief for those making under $100,000 annually, and then the amount of debt cancellation gets smaller as salaries go up. Those making over $250,000 will receive no debt relief, as Warren's Medium post states. She referred to an analysis from her plan from topical experts from Brandeis University's Heller School for Social Policy and Management, which argued that 95% of people holding student loan debt would find some relief through her plan.

That's not all that Warren's plan offers, however. She's also calling for a major government investment into the public university, college, and community college system, specifically in the form of an elimination of all tuition and fees for students attending any public institution of higher education, according to the Medium post.

"College shouldn’t just be a privilege for those who can afford to take on the significant expenses associated with higher education," Warren wrote in her plan. "Like K-12 education, college is a basic need that should be available for free to everyone who wants to go."

As Warren's plan explained, it's not hard to see how college became so unaffordable, and how student debt then ballooned for millions of Americans. States cut higher education funding over the past several decades, as a report from the Center on Budget and Policy Priorities showed.

This affects students across the board, but Warren's Medium post explained that she's paying particularly close attention to rectifying the structural inequality that rising college costs contribute to. As a Demos report states, the rising cost of higher education affects students of color more than white students, and Warren's plan includes specific elements to help rectify this situation, like a special fund meant just for Historically Black Colleges and Universities and Minority-Serving Institutions.

Critics of Warren's plan are likely to cite the cost as a potential issue, but her Medium post explained how the government would pay for it. The total cost of her proposed Universal Free College program would come to $1.25 trillion over a decade, with a one-time expenditure of $640 billion to cover the student loan debt cancellation. Warren wrote that investments in higher education have financial benefits far beyond their costs, as studies from organizations like the OECD have shown, but she's also put forward a policy proposal to pay for it: her Ultra-Millionaire Tax.

Warren's Medium post about this plan finishes on a truly inspirational note:

We can address the student loan crisis and cancel debt for families that are struggling. We can provide truly universal free college. We can fix some of the structural problems that are preventing our higher education system from fairly serving lower-income students and students of color. We can make big structural change and create new opportunities for all Americans.