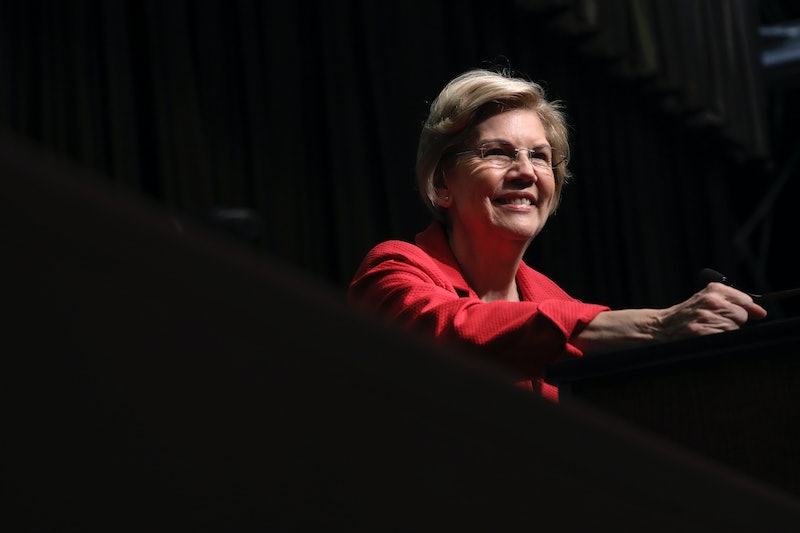 To Democratic presidential candidate and senator Elizabeth Warren, the HBO cultural phenomenon Game of Thrones isn't just a fun way to fill a Sunday evening. To her, it's also a comment on our times, and the very forces that she's fighting against in her political life and her current campaign. Elizabeth Warren's review of the Game of Thrones premiere in New York Magazine's The Cut gives credit to all of the powerful women fighting it out for the Iron Throne, but at the same time it also reveals who Warren's favorite is and why (and don't worry, there are only minor spoilers for the Season 8 premiere).

"I watch Game of Thrones because, just like everyone else, I want to find out who lives, who dies, and who ends up on the spiky iron chair in King’s Landing," Warren wrote. "But for me, the hit HBO show is about more than a death count (I’ll leave that to Arya). It’s about the women."

As she went on to explain, though, she's drawn to the female characters not just because of the long-running theme of female power in Game of Thrones, as The Guardian and others have explored. In one particular character, Warren explained that she sees someone fighting a fight much like hers.

Perhaps it's a hint that Warren titled the review "The World Needs Fewer Cersei Lannisters." In Queen Cersei, Warren sees a ruler "doesn’t expect to win with the people — she expects to win in spite of them." The whole Lannister family, as Warren writes, "have long been the richest family in Westeros, and they’ve paid an enormous price to become richer and more powerful." They've relied on their riches — both their family coffers and what they stole from others — to protect themselves and consolidate their power. But now that the Night King threatens the entire civilization, Warren noted that Cersei hasn't made any effort to band together with the rest.

"No, Cersei’s army will sit back and wait for whatever comes their way," Warren wrote. "Cersei’s betting on the strength of the bank to get her through the biggest fight of her life."

Rather than Cersei, Warren's review reveals that she backs the Khaleesi.

"Daenerys “Stormborn” Targaryen has been my favorite from the first moment she walked through fire," Warren wrote. "Dany might be a princess by birth, but she wasn’t dealt an easy hand."

As Warren explained in her review, she sees Dany as a character who had to fight to defeat her miserable circumstances and who has always prioritized the people who are less powerful than she. After all, Dany freed thousands of slaves, earning their unending loyalty, and her mission as she stated it (and as Warren noted) is to "destroy is the wheel that has rolled over everyone both rich and poor, to the benefit of no one but the Cersei Lannisters of the world.”

"This is a revolutionary idea, in Westeros or anywhere else. A queen who declares that she doesn’t serve the interests of the rich and powerful?" Warren wrote. "A ruler who doesn’t want to control the political system but to break the system as it is known? It’s no wonder that the people she meets in Westeros are skeptical."

While she didn't state it explicitly in her review, Warren's own actions as a politician align her far more with Dany than with Cersei. After all, she's spent her whole career fighting to protect consumers against Wall Street excesses, as PBS explained. Now, as the Game of Thrones season continues, we can see if Warren's favorite will come out on top.