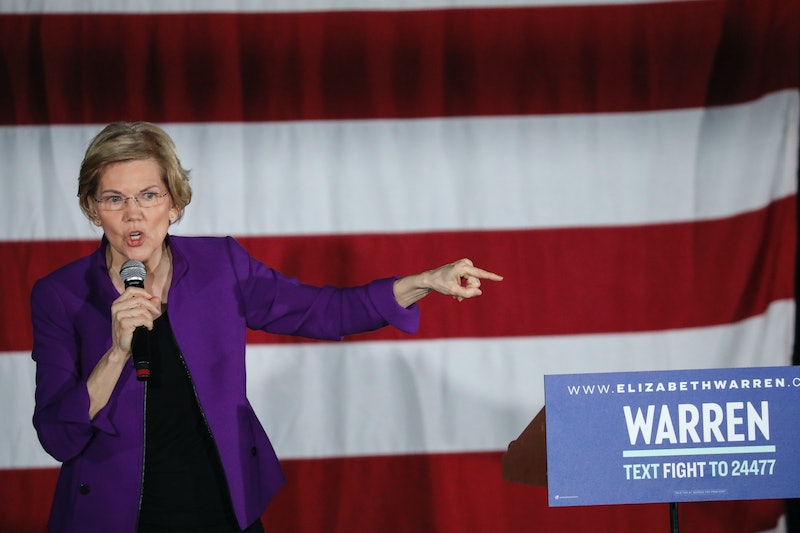 When she's not running for president, Elizabeth Warren — and her husband — evidently enjoy hiking and spending time in America's public lands. That's how she introduces her latest policy proposal, which was published via Medium on Monday. Warren proposed a public lands plan that would change Americans' relationship with national parks, the environment, and fossil fuels.

She reiterated how important she sees them before arguing that the Trump administration has placed the country's public lands "under threat." Warren wrote that "the Trump administration is busy selling off our public lands to the oil, gas and coal industries for pennies on the dollar — expanding fossil fuel extraction that destroys pristine sites across the country while pouring an accelerant on our climate crisis." Bustle has reached out to the White House for comment.

Warren's solution is a bold one. According to her Medium post, Warren plans to sign a moratorium on new leases for fossil fuel extraction offshore and on public lands on day one in office and commit to harnessing renewable energy there instead. Her goal, she wrote, is that 10% of the country's total electricity generation to come from renewable sources offshore and on public lands.

"Any serious effort to address climate change must include public lands — fossil fuel extraction in these areas is responsible for nearly a quarter of all U.S. greenhouse gas emissions," Warren wrote.

Other key parts of the plan according to Warren's Medium write-up, include restoring protection to lands that Trump opened to drilling and mining, investing in Americorps to rebuild national parks, and lowering the entrance fee to $0 so that all Americans — regardless of income — can enjoy them.

The recruiting of more AmeriCorps volunteers could help more than just the national parks. It also could help provide young people and veterans with skills. "I will recruit 10,000 young people and veterans to jumpstart a 21st Century Civilian Conservation Corps  —  and increase the budget of AmeriCorps’ one-year fellowship program to fund it," Warren wrote in the Medium aritcle, referencing President Franklin Delano Roosevelt's public work relief programs.

"This will create job opportunities for thousands of young Americans caring for our natural resources and public lands, deepening their lifelong relationship with the great outdoors," Warren continued.

But not all her policies are geared at city-dwelling lefties. A part of her proposal may appeal to "hunters, anglers, and other outdoor enthusiasts." Warren wrote that 10 million acres in the West are not available to these Americans to access. She promises to change that — opening up at least half of those lands — saying in her Medium post that it will "provide a financial boost across rural America" through outdoor tourism spending.

Warren also wrote that she will have the Interior Department do a better job of incorporating "the role of state, local, and tribal stakeholders in the management of public lands." This may appeal to those who resent edicts from Washington.

"America’s public lands belong to all of us," Warren wrote, summing up her policy. "We should start acting like it — expanding access, ending fossil fuel extraction, leveraging them as part of the climate solution, and preserving and improving them for our children and grandchildren. Together, we can manage and protect our public lands for generations to come."

The latest Warren policy write-up shows that public lands is something she has a handle on, too.