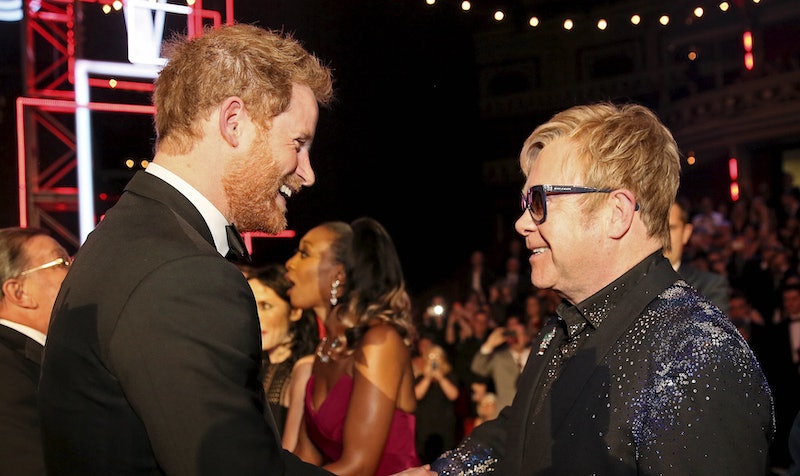 Royal watchers everywhere are eagerly awaiting Baby Sussex's arrival. Apparently, one very famous musician, who just so happens to be a friend of the royal family's, is also looking forward to the special day. As Marie Claire reported, Elton John's prediction about Prince Harry and Meghan Markle's baby proves that the singer is also eagerly awaiting the new arrival.

In an interview with The Sun, published on May 2, John said that he believes Markle will give birth "any second now." Given the duchess' past statement about her due date (as she hinted toward a due date around late April or early May) and reports about how she might be overdue, he's probably right on the money with that prediction.

In case you weren't already aware, John has a special connection with Harry and the prince's late mother, Princess Diana (he wrote the song, "Candle in the Wind," in honor of her and performed it at her 1997 funeral, per Harper's Bazaar). In addition to attending the Duke and Duchess of Sussex's May 2018 nuptials, the "Tiny Dancer" singer actually provided some entertainment at their reception. During his interview with The Sun, he opened up about his turn as a wedding singer, saying:

"It was fun. They were a great audience so I did them another song. I was only going to do three and I did four. I added in 'Can You Feel The Love Tonight' as an extra."

John also discussed how much Harry is like his mother, given the royal's extensive charity work and his positive nature. "He’s a very sweet, young, kind man. He wants to do good for the world and use his position to do good," he said, and continued, "He’s wonderful. He’s got his mother’s ability to connect with people and a very kind heart."

All of the updates about Baby Sussex would definitely point towards the little one arriving "any second now." But, despite royal baby fever being at an all-time high, Buckingham Palace previously clarified on May 2 that the child "hasn't been born yet," according to CBS News. Following that statement, it was revealed that Harry would be postponing an upcoming trip to Amsterdam that was originally scheduled for May 8, which served as even more proof that their baby hasn't arrived yet.

When the little one does arrive, the Duke and Duchess of Sussex previously revealed that they'd be forgoing a post-baby, hospital photoshoot like Kate Middleton and Prince William. Instead, they're planning to celebrate the moment privately before releasing any updates to the public. A statement from Buckingham Palace (via People) read:

Since Baby Sussex might arrive "any second now," like John predicted, royal watchers will just have to wait patiently for any royal baby updates straight from the Duke and Duchess of Sussex.

More like this
Tyler Perry Makes Rare Comment About Meghan Markle & Prince Harry's Love Life
By Radhika Menon
Lilibet Had The Most Adorable Reaction To Prince Harry’s Dancing
By Sam Ramsden
Here's When 'The Crown' Season 5 Will Premiere — And What To Expect
By Bustle Editors
Everything To Know About Taylor Swift’s 10th Studio Album, 'Midnights'
By Grace Wehniainen and Jake Viswanath
Get Even More From Bustle — Sign Up For The Newsletter