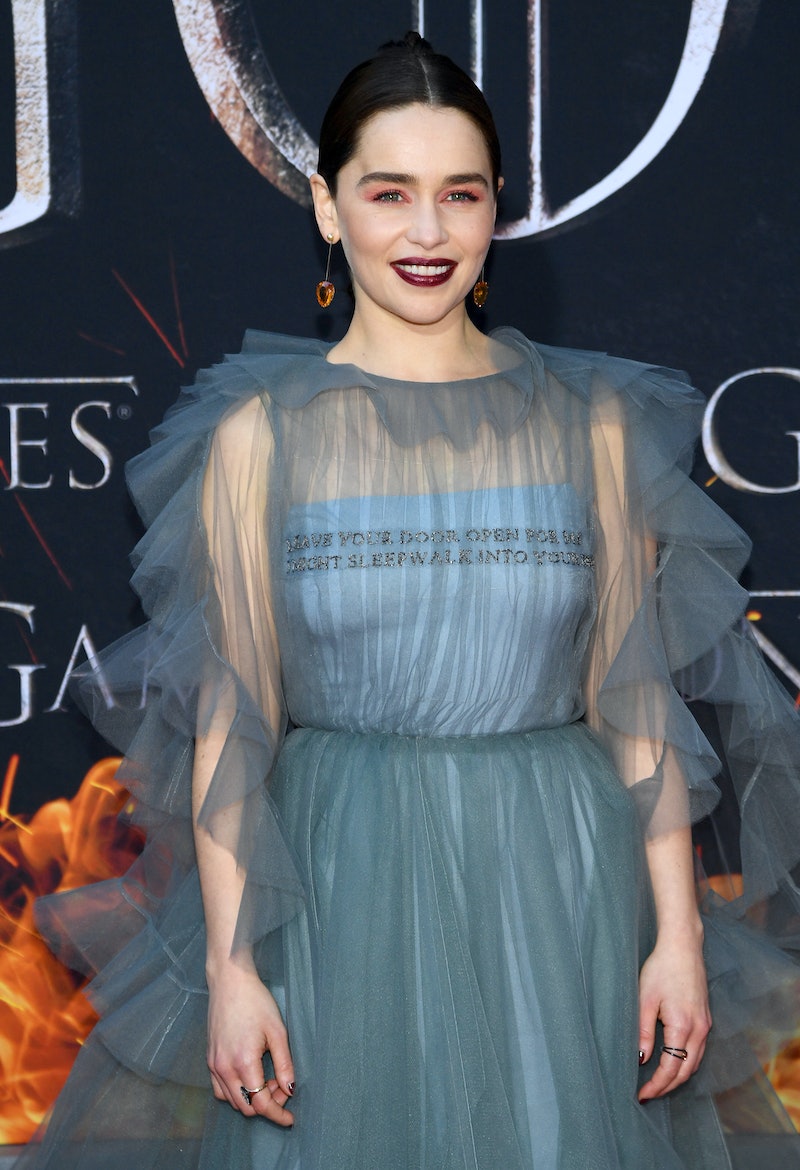 Game of Thrones Season 8 finale spoilers ahead. Here is something you almost definitely will not be able to relate to on any level: In a new interview with The New Yorker, actor Emilia Clarke said she's scared Beyoncé might hate her after she sees the final episodes of Game of Thrones. You know, because of that whole thing where her character Daenerys Targaryen went from being a seemingly altruistic leader to a bloodthirsty and power-hungry tyrant who wiped out an entire city in, like, 30 minutes. Clarke told the publication that when she met Beyoncé at an Academy Awards party earlier this year, she thought, "Oh, my God, my absolute idol in life is saying that she likes me, and I know for a fact that by the end of this season she's going to hate me."

Queen Dany told the magazine that at one point in the evening, she saw "this vision, this angel, this incredible woman float" over toward her. The incredible woman was none other than Queen Bey. Beyoncé introduced herself and praised Clarke's work and, understandably, Clarke "just couldn’t handle it." Seriously though, who could blame her? As if there is any other proper response to Beyoncé telling you she is a fan of yours.

"I was on the verge of tears," Clarke said. "I could see myself reflected in her eyes. I could see her go, 'Oh, no. I misjudged this. This girl is crazy and I'm not going to have a real conversation with another celebrity. I'm having a conversation with a crazed fan who's looking at me like a rabbit in the headlights.' Which is exactly what I was."

"I said, ‘I’ve seen you live in concert and I think you’re amazing and wonderful! Wonderful!’ And all I wanted to scream was ‘Please, please still like me even though my character turns into a mass-killing dictator! Please still think that I’m representing women in a really fabulous way.'"

Again, this is not the most relatable story of all time, but by golly, it sure is endearing.

When Clarke went on Jimmy Kimmel Live! earlier this month, she talked about crossing paths with Beyoncé at the post-Oscars event. While she did not get into all of the Daenerys character stuff and how it may or may not impact Beyoncé's opinion of her (because duh, no spoilers), she did mention how starstruck she was. "She voluntarily came up to me, like came up to me, open-faced, like, 'I want to talk to this girl,'" Clarke recalled. "And I was kind of like, ‘Who’s behind me?’ And I just messed it up. She was clearly a fan and I ruined it."

Hey, as long as no one yelled "dracarys," right?