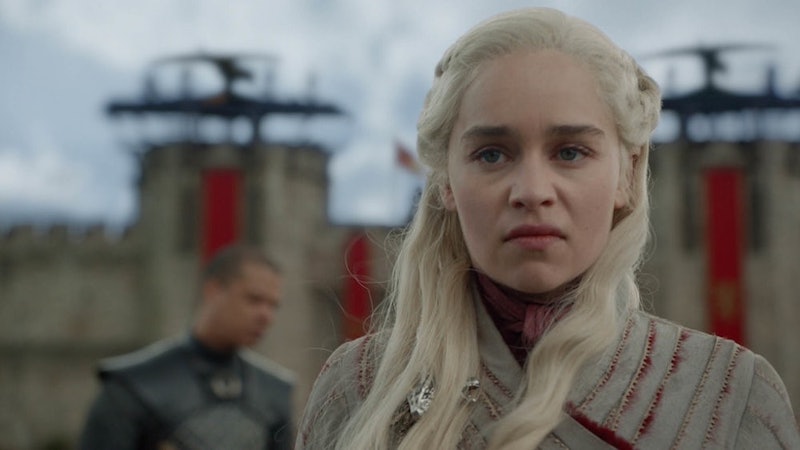 Spoilers ahead for Game of Thrones Season 8, Episode 5. King's Landing is burning, and the Mother of Dragons herself is just as rattled as you are. In a stunning upset, the penultimate episode of Game of Thrones Season 8,titled "The Bells," laid bare the finalization of Daenerys' Mad Queen story arc. In the May 12 episode, Daenerys Targaryen descended into full-on madness with a murderous rampage through King's Landing in Westeros, which resulted in — in true Game of Thrones fashion — severe blood shed. But while theories have been around for quite some time now in regards to Daenerys' ultimate descent into darkness, GoT fans were still very much unnerved by, as Twitter user @eliefares succinctly put it, the "character assassination" of someone that has served as a beacon of hope throughout the series. Well, as it turns out, fans weren't the only ones rattled over the episode.

Following Sunday's intense outing, Emilia Clarke took to Instagram to react to her fictional counterpart's actions. In a May 13 Instagram post, Clarke posed with a bottle of champagne in reaction to an episode that blew her wig off. She captioned the picture, "This is what it took not only to shoot ep5...but to watch it too!" Clarke concluded the Instagram post with the hashtag #soshockingitblewmywigoff.

Same. This is literally all of us. The champagne bottle is seriously on point.

Daenerys has experienced her fair share of betrayals and losses throughout the series. But while it may seem inevitable for the Mother of Dragons to follow in the footsteps of her father, Aerys Targaryen, the Mad King, and fulfill his wish to burn it all to the ground, her Walter White progression into antihero territory left fans with a bitter taste in their mouths. After all, this was a woman who freed slaves and endured atrocious abuses.

On Twitter, user @eliefares aired their grievances with Daenerys' story arc. They wrote, "I am still mad at the character assassination that #GameOfThrones is doing to Daenerys. She was literally freeing slaves for 6 seasons while all of the other characters were fighting each other, sleeping with their brothers, blowing up churches, and she's the one going mad?"

Fares also touched on the contrast of female and male counterparts in the series. They concluded their thread with, "As #GameOfThrones reaches its end, it shows us two things: women characters — despite how well they might be fleshed out — will almost never be as important as less interesting male counterparts. And women (or rather General characters) of color are at an even worse disadvantage."

Another Twitter user, @carohuntz, wrote, "Daenerys Targaryen survived an abusive brother and husband, being sold, raped, degraded and disregarded for being a woman. Then saved millions of ppl from terrible fates just to be turned mad for a plot twist cause the writers wanted "shock value". I've no words."

And of course, the Daenerys memes were aplenty.

The final episode of Game of Thrones will air on May 19. Given the recent carnage, it's safe to assume that more wigs — and not just Clarke's Daenerys wig — will be blown off.