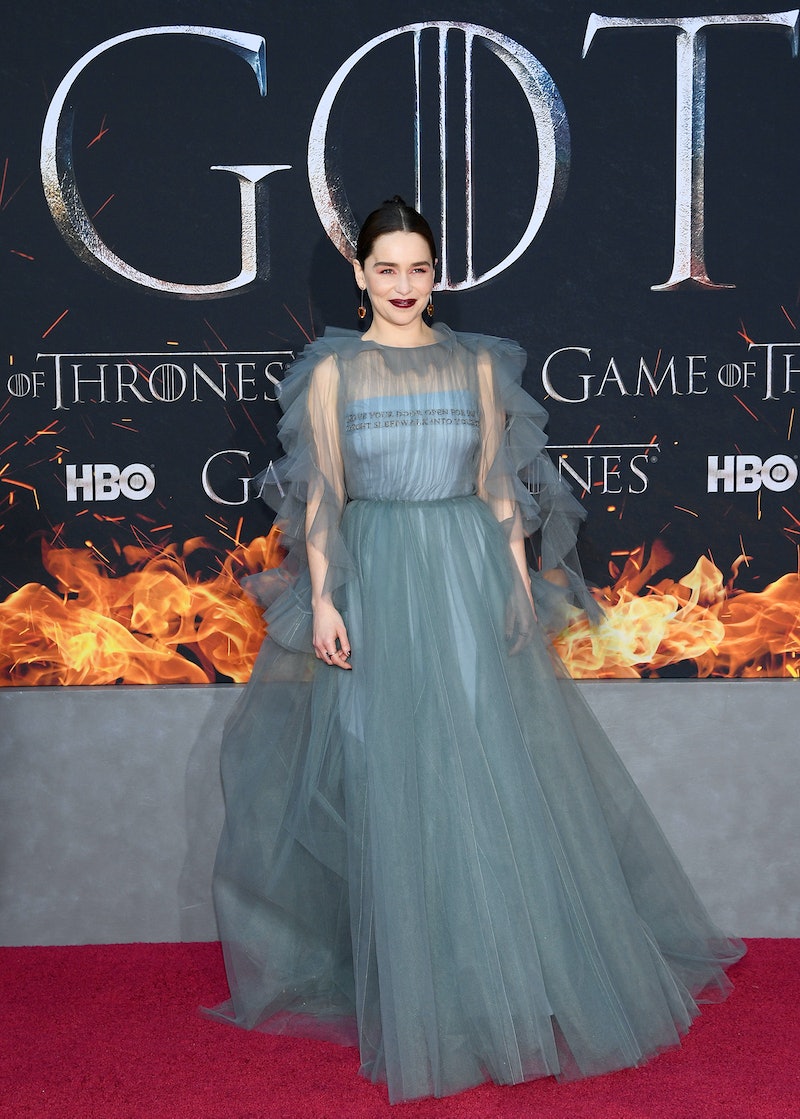 While Game of Thrones may be coming to an end, the stars of the hit HBO series got together one last time for their final premiere, and to say they all look amazing would be an understatement. However, one star may have been a stand out because Emilia Clarke's hair at the Game of Throne premiere was actually a sweet tribute to her character Daenerys Targaryen. If you aren't ready for the end of the series, get your tissues ready because the meaning of her hairstyle may just make you cry.

According to Refinery29, Clarke's hair was done by longtime hairstylist Jenny Choi, and while from the front her dark hair simply looked as if it were parted down the center and pulled back, a photo from Choi's Instagram account reveals that the actor was actually rocking Targaryen braids. Yes, the choice was intentional.

In her post, Choi stated that she wanted to give Clarke's hair the braids as a tribute to the iconic styles that Clarke's character, Daenerys Targaryen, has had throughout most of the series. The result was an edgy, braided updo perfect for the Mother of Dragons' last time on a red carpet for the hit HBO series.

Of course, if you're a fan of Clarke's you'll know that her hair has undergone some changes recently, and while she can't wear a full Daenerys Targaryen braid any longer, she can totally rock this modern take on the look.

While Clarke has had blonde hair a la her character's famous mane since 2017, on the 2019 Oscars red carpet, her brunette locks returned, and she looked incredible. On the Game of Thrones red carpet, she kept her dark brunette hair instead of going back to blonde for an evening, but those braids were still a super sweet tribute.

Clarke's brunette transformation for the Oscars is far from her only hair change in the past few years, and she's never one to miss a good Game of Thrones reference when it happens. Back in May of last year, Clarke appeared on Good Morning America to promote her film Solo (because yes, she's in both the GoT and Star Wars worlds. Totally casual, right?). While there, Choi took a few of Clarke's ends off before the show, and the actor just couldn't resist a Game of Thrones pun.

In an Instagram caption before the appearance, Clarke wrote, "...this FABULOUS new bob is the chicest way to style out some burnt out mother of dragons split ends," and even added the hashtag #whenyourendslooklikeawildlingsitstimetochop. Clearly, when it comes to her hair, Clarke is all about a good reference to her now iconic character and the hit series.

Game of Thrones is coming to an end soon, and the series' premiere red carpet seemed to be the perfect place to honor the show and its characters. For Clarke, that seems to have meant paying homage to Daenerys Targaryen and her famous braids. If this sweet gesture made you a little misty, don't be too sad yet. The final seasons' premiere isn't until April 14, so there's still time for you to live in the world of Westeros for a bit longer.