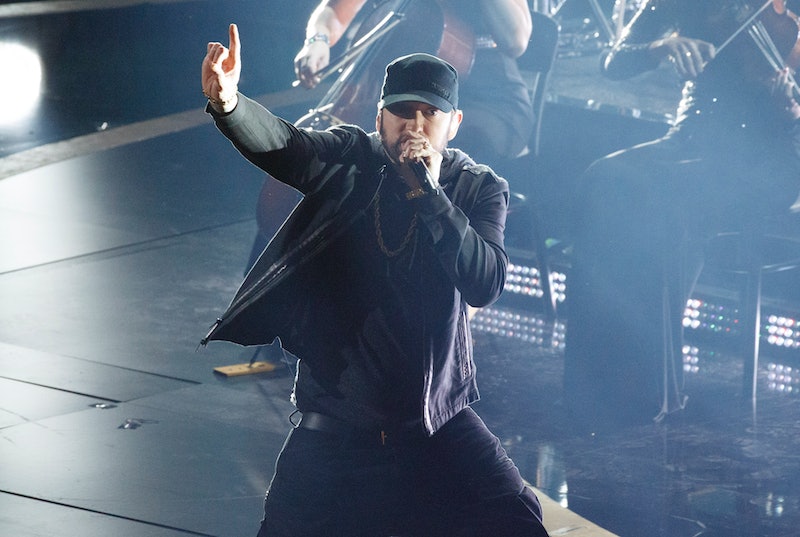 The 2020 Academy Awards were filled with stars, speeches, beautiful gowns, and... Eminem. The rapper surprised viewers when he popped up on stage unannounced to perform "Lose Yourself," his Oscar-winning song from 8 Mile, for no apparent reason. Now, he's shed some light on that reason. In a rare interview with Variety on Monday, Feb. 10, Eminem revealed why he agreed to perform at the Oscars 17 years after he won the award.

It turns out, getting Eminem to perform at the Oscars almost two decades after he didn't attend the show. "Lose Yourself" was already set to be apart of a montage during the show; all the Oscar producers had to do was ask Eminem if he would like to be apart of it. "It was cool because we just put out an album, so we said maybe that'll make sense with the timing of the new album," he told Variety. So, maybe it was less about reclaiming his moment from 2003, and more about promoting his new album, Music to Be Murdered By.

Still, the rapper said he was happy to have the opportunity to right his past Oscar wrong. "I kinda figured maybe since I didn’t get a chance to do it at the time, maybe it would be cool," he told Variety about why he decided to finally take the Oscars stage. "Back then, I never even thought that I had a chance to win, and we had just performed 'Lose Yourself' on the Grammys with the Roots a couple of weeks before the Oscars, so we didn’t think it was a good idea."

As for how the performance came together, Eminem revealed he only rehearsed for the show "four or five" times. And everything was done in total secrecy. "I think it was either [the Oscars’] idea or Paul and [longtime publicist Dennis Dennehy’s] idea before they brought it to me," he said about their decision to not announce his appearance. "It was presented to me that way and I said, "Oh that’s kinda dope, to not even announce it.'"

Their decision paid off. Eminem's appearance was a huge shock to the world, especially to Martin Scorsese, Idina Menzel, and Billie Eilish, who provided the perplexed yet bemused reactions that perfectly described what everyone was thinking. Perhaps if they were reminded of the rapper's Oscars history prior to his huge performance, they wouldn't have been so confused.