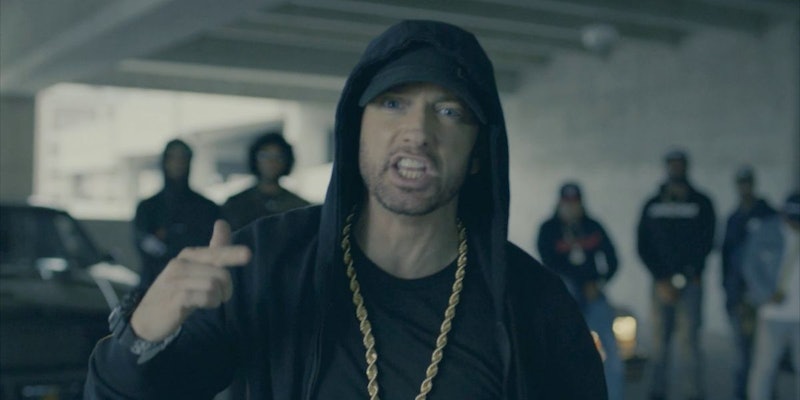 One of the best things about BET's Hip Hop Awards is watching both new artists and seasoned rappers take the stage to perform. And returning to the award show and green carpet on Oct. 10 for the first time since 2011 was veteran rapper Eminem. In one of the most memorable performances of the 2017 BET Hip Hop Awards, Eminem threw some serious shade at Donald Trump and his supporters.

Eminem is no stranger to delivering real lyrics, but he showed everyone just how "woke" he is now, by spitting bars during a cypher that voiced his thoughts and feelings on a number of issues, including the national anthem protests in the NFL, Trump’s foreign policy, and even Trump’s “orange” skin. Now fans are reminded exactly why Em calls himself the "real slim shady."

Earlier in the day, host DJ Khaled promised via social media that the rapper would be returning to show, but never in any fan's wildest dreams could they expect a performance like this one. The 44-year-old made his political opinions very clear: he’s no fan of Trump and doesn’t want any of his fans to support him either. During the four-and-a-half minute freestyle, Em described the president as "a kamikaze that'll probably cause a nuclear holocaust." Elsewhere, he served pointed punch lines: "Plus he gets an enormous reaction/ When he attacks the NFL so we focus on that and/ Instead of talking Puerto Rico or gun reform for Nevada/ All these horrible tragedies and he's bored or would rather/ Cause a Twitter storm with the Packers," along with a handful of other shady references bleeped out for TV.

He raised a fist in salute to former President Barack Obama as well as NFL quarterback Colin Kaepernick, who made headlines in 2016 when he began protesting by not standing while the national anthem played before the start of games. Eminem also tossed in references to Trump's feud with Senator John McCain, the recent white nationalist march in Charlottesville, and the President's proposed wall along the Mexican border. And if Em's message wasn't already clear, the rapper turned up the heat a notch at the end of his rhyme. Before closing out his performance, he gave America an ultimatum: to stand against Trump, or to stand in front of his middle finger.

Fortunately for Eminem, many fans agree with his fiery bars and took to Twitter to show their support. Some fans even referenced his 8 Mile movie character, who, like Eminem himself, always managed to keep it real. Others speculated about how Trump is going to respond on Twitter once he hears about this latest diss.

Although the latest display from the rapper, this isn't the first time Eminem has spoken about his opposition of Trump. During a festival performance England in August, he shared his distaste for 45 in front of a crowd of fans. "I don't want to cause any controversy, so I won't say no names," Em started off his rant, according to the New York Daily News. "But, this motherf*cker Donald Trump I can't stand." He then proceeded to lead the festival-goers in a "F*ck Trump" chant, just before performing his track "White America."

He also slammed Trump last October in "Campaign Speech" which is a rap that serves as a commentary on Trump winning the election. Additionally, he unleashed his thoughts in a verse on Big Sean's song "No Favors," earlier this year. On the track Eminem raps: "I'm anti, can't no government handle a commando/ Your man don't want it, Trump's a b*tch, I'll make his whole brand go under."

One can only imagine what the response will be from the White House about this performance in the coming days. But, regardless of the backlash he might face Eminem has made it perfectly clear that he will not be silenced.

More like this
Two UK Cities Are Now In The Running To Host Eurovision 2023
By Sam Ramsden and Rachel Mantock
Everything To Know About Taylor Swift’s 10th Studio Album, 'Midnights'
By Grace Wehniainen and Jake Viswanath
Twitter Is Freaking Out Over Rihanna’s 2023 Super Bowl Halftime Show Announcement
By Stephanie Topacio Long
Jason Derulo Is Launching A New Singing Show In The UK
By Maxine Harrison
Get Even More From Bustle — Sign Up For The Newsletter