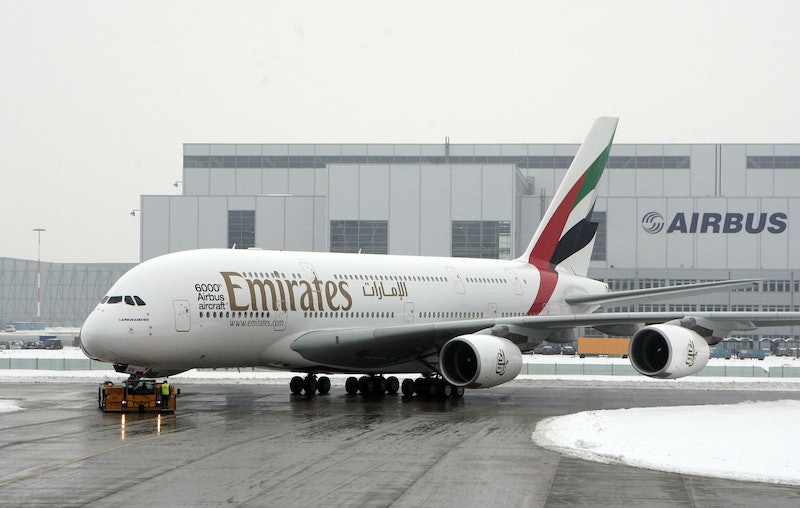 Passengers on Emirates Flight 203 thought they were embarking on a normal (if long) flight from Dubai to New York City on Wednesday. Instead, well over a dozen people reported symptoms of illness while they were in the air. Then, the Emirates flight was quarantined at JFK Airport when it touched down on Wednesday morning.

"All we have been told is that some passengers have fallen ill and we should remain in our seats," tweeted Larry Cohen, apparently a passenger on the plane.

The CDC told USA Today that up to 100 people on board, including some members of the crew, had "complained of illness including cough and some with fever." NYC Mayor Bill de Blasio's press secretary, Eric Phillips, announced in the early afternoon that 19 people were found sick, 10 of whom had agreed to go to the hospital and nine of whom had declined to seek treatment.

The plane arrived at 9:15 a.m. ET, and it took until around noon to evaluate all of the people on board, according to USA Today. The cause of their symptoms had not yet been determined as of this writing, but Phillips said that "health officials are processing tests now to determine the cause" and that "symptoms [are] still pointing to the flu."

Incidents like this are rare, but not unheard of. In 2017, for example, a flight from Barcelona to Liverpool was quarantined because a passenger had chicken pox. A flight from Brussels to Newark was quarantined in 2014 after a man was found vomiting (the scare was heightened because it was during the Ebola crisis). This latest event seems to be particularly remarkable for its scale, though, since over a dozen people are reported to have complained of symptoms. USA Today reports that this Emirates aircraft, the Airbus A380, is the biggest commercial plane in existence.

It's notoriously easy to be exposed to germs while flying. The enclosed space of the airplane, along with the compacted people and the numerous places where germs can collect (especially the toilets, tray tables, and seat belts), can make the perfect recipe for illness. A 2007 study in the The Journal of Infectious Diseases found a pathogen in 43.2 percent of those surveyed after flying.

CDC regulations require that airline personnel report when a passenger either has a fever and another serious symptom, a fever that's lasted for over 48 hours, or "symptoms or other indications of communicable disease." The agency seems to encourage reporting in general and doing so as quickly as possible, adding, "Early reporting ensures prompt ground response to maximize timely care, reduce the risk for spreading disease, and minimize travel disruption."

In its statement about the incident on Wednesday, the CDC said that its "public health officers are working with port authority, EMS, and CBP officials to evaluate passengers including taking temperatures and making arrangements for transport to local hospitals for those that need care."

The agency continued, "Passengers who are not ill will be allowed to continue with their travel plans, and if necessary will be followed up with by health officials."