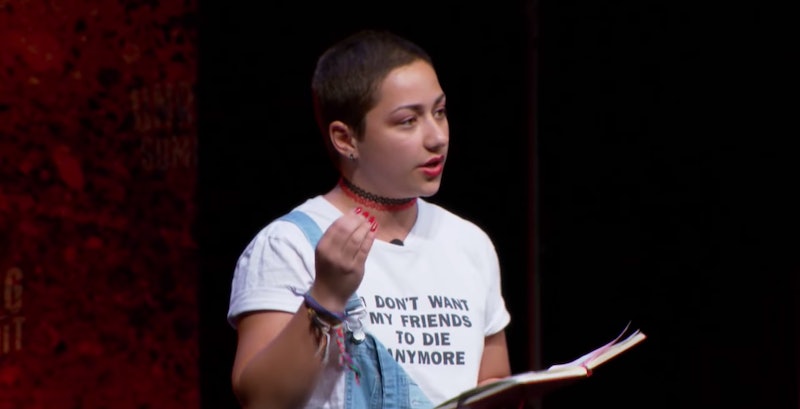 "I'm speaking out against gun violence for selfish reasons," a March for Our Lives activist told attendees of the Unrig Summit in Nashville over the weekend. "I'm trying to protect me, my friends, my family." You might feel similarly — even if your friends and family are against gun control. If so, Emma González explained how to argue against the NRA to your relatives.

It all comes down to knowing the talking points that the NRA uses and being able to refute them, González said. "A good guy with a gun would stop a bad guy with a gun," "guns don't kill people, people kill people," and "if a bad guy wants a gun that bad, he'll find a way to get one" were among the sayings she shared.

González said when these talking points are brought up, she counters them with "good old-fashioned common sense." She then gave a run-down of how to refute them when you're with your family — at Thanksgiving or whenever.

For the "good guy with a gun" argument, she asked why the bad guy even had a gun to start with. She also said that in real life, there's no "outline showing who the bad guy is," which can make the job of police harder. She also addressed the racial factor: When good black men with guns stop shootings, they are often mistaken to be the bad guy — and are even killed as a result.

"And how do you know someone is actually a good guy?" González asked. "Sounds like you need background checks!" She pointed out that 97 percent of Americans support universal background checks. Putting on an announcer voice, she added, "Ladies and gentlemen, the NRA has been defeated by its own logic!"

González explained that her dad and grandfather joined the NRA when they moved to the United States from Cuba. But then the organization was focused on responsible gun ownership. Now, she said it gets "kickbacks" from gun manufacturers, "bankrolls" politicians it wants in power, and funds lobbyists.

"The NRA isn't fighting for your Second Amendment rights anymore," González said. "They're fighting to fill their wallets and get into the pockets of politicians everywhere." González also clarified that she's not criticizing individual members of the organization — just the leaders at the top. Bustle has reached out to the NRA for comment.

González has a lot more advice on what to say to those following the "NRA mentality," including those who want to be the "good guy with the gun." She said another activist responded to a would-be vigilante by asking if he wanted to be Batman.

That's just the beginning of González's arguments, many of which are filled with jokes. And to fully soak them in, you can watch her full speech in the YouTube video (she takes the stage at 1:06). You don't want to miss it.