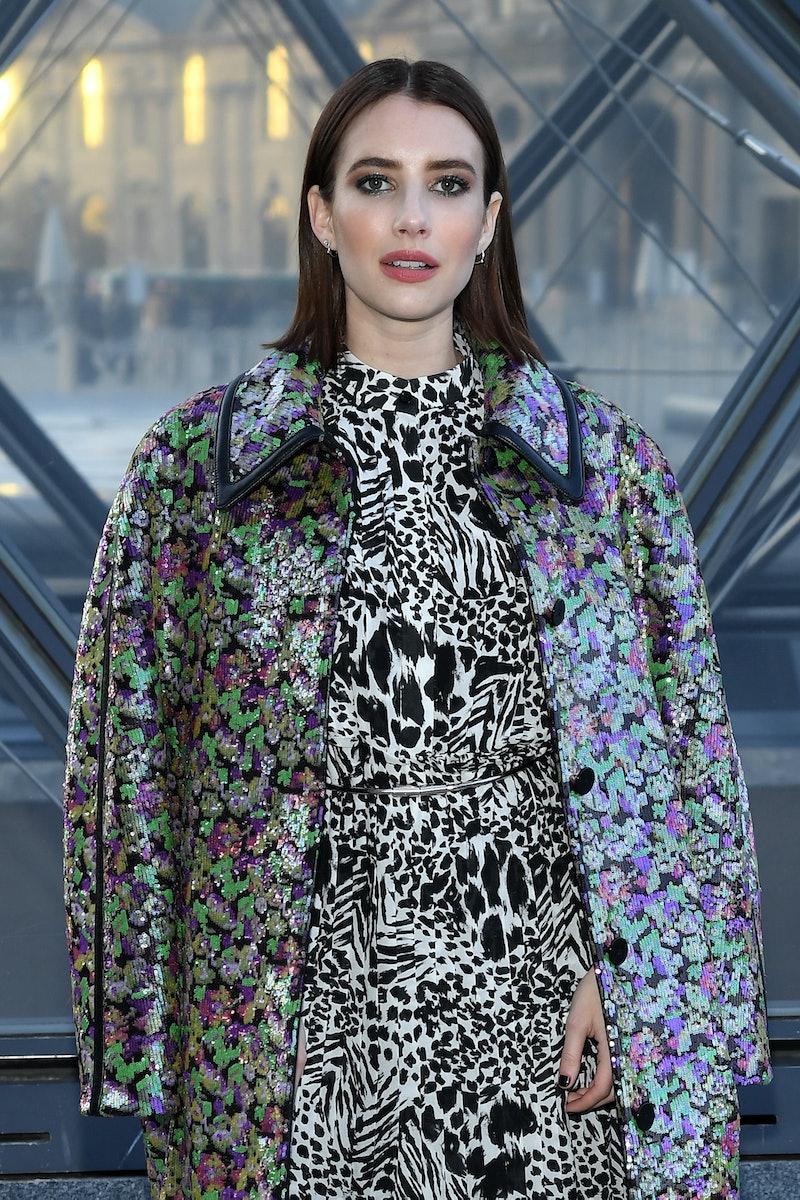 Well, that didn't last very long at all. After a two-month pitstop with a chic and sleek brunette bob, Emma Roberts has long, wavy blonde hair now. The actor debuted her new strands in an Instagram post on Wednesday, captioning the shot "Sunrise blonde and whisper waves." Those are perfectly accurate terms to describe her new hue and 'do. This mega mane has fans saying she looks exactly like her aunt, actor Julia Roberts. Followers repeatedly stated that Emma is twinning with Julia — who is known for her voluminous waves but recently got a long lob — in the comments of the post.

Roberts' hair now falls to mid-chest and honeyed highlights are dispersed throughout, while her roots and tips appear a bit darker. The blonde shade contrasts beautifully with her dark, full eyebrows and curled lashes.

This new cut and color are very likely the work of color processing on her natural strands and strategically placed extensions, since, well, she can't grow that much length overnight. Roberts also tagged Nine Zero One Salon and the celebrity hair team that was responsible for lightening and lengthening her locks.

In the image debuting her 'do, Roberts' gaze is averted and her grin is ear-to-ear.

While Roberts didn't indicate if changing her hair was a professional or personal decision, she clearly loves having long locks that frame her face. Ultimately, it's such a versatile style. Roberts can rock updos, blow it stick straight, or add tons of volume and texture by adding sea salt spray, scrunching it, and letting it air dry.

"Emma needed to go light again for an upcoming project she's working on," says her stylist Nikki Lee in the press materials received by Bustle. "We wanted to add our own twist to it and create a color she's never been before. Instead of doing the typical bright blonde, we went for a 'boho sunrise tone.' Something that felt a bit more undone and effortless. Riawna [Capri] and I tag-teamed Great Lengths extensions to add length and volume. Riawna then gave her a long shattered, textured cut and we styled her out with our new favorite 'whispering waves,' summer's new go-to texture!"

You can truly appreciate the resemblance and the coif connection between niece and aunt when looking at these two images.

Roberts showed off her chin-length, chestnut brown lob back on February 19. So she only rocked the warm, rich, and winter-ready shade for about two months before trading it in in favor of golden, beachy, and summery waves.

Roberts was utterly stunning when she first stepped out and appeared at a red carpet event with her brown lob at the 2019 Vanity Fair Oscar Party. Her choppy, chocolate locks popped against her beaded naked dress.

As mentioned, fans were quick to react and share their opinions on Roberts returning to long blonde hair in the comments of the post, which generated over 700,000 likes in just a few hours of going live.

One fan posted, "Julia Roberts, is that you?," while another wrote, "OMG. You look like your aunt so much rn." Lots of users stated that this look reminded them of Roberts as Poppy in the film Wild Child. Another fan was here for her eye framers, posting, "Those brows!" This user praised Roberts for having an amazing style no matter what, writing, "Love your style always have, adore the short hair but this is so beautiful babe." This user said it best, though, posting, "This is your look!"

How long the younger Roberts actually sticks with this style remains to be seen. She may commit to it or she may decide to shed the length sooner than later. Whatever she decides, one thing is for sure: She will look absolutely gorgeous.