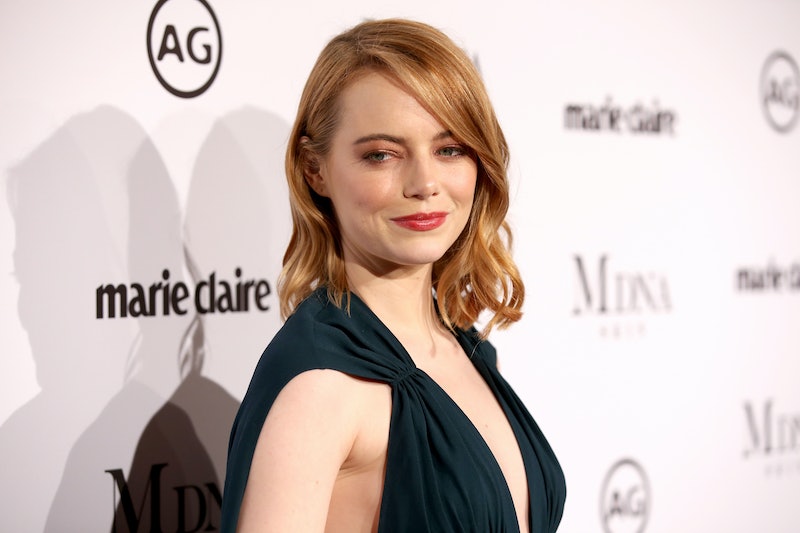 New year, new hair inspiration. As Glamour found, Emma Stone got a perm with her close friend, and her hairstylist documented the entire process. From curlers to final wash-out, the images will walk you through every single step, so you can feel a little better about taking the perm plunge.

Perms are having a moment. Not in the tight, ring-curled, larger-than-life kind of way. Instead, people are personalizing their curls in a brand new way. If you're still on the fence about getting one, Stone will change your mind. According to the Instagram posts, NARS Director of Pro Artistry Rachel Goodwin and Stone got matching perms — and they both turned out incredible. Because who need friendship bracelets when you could solidify BFF status in a much more trendy way?

The two visited Mare Salon in West Hollywoods and got their perms by celebrity hair stylists Mara Roszak and Kiley Fitzgerald, according to the Instagram post. Stone and Goodwin share the entire process, from the curlers to the wash to the final product.

"We have a permanent bond! Some friends get tattoos, well we get perms," Goodwin wrote in the caption. "We’re here to tell you that they are BACK and they're not your grandmas perm!"

Perms aren't just a way to get super-curly locks anymore. Hairdressers can get personalize the perm to work with your natural curl. That way, you can spend less time using heating products throughout the week.

"It's a great look to get an air-dried finish and a great way to give straight hair a soft bend and movement without additional heat and styling time,” Matrix celebrity stylist George Papanikolas tells InStyle. "There are also modern techniques where it can be straighter at the top half with the bend in the hair starting at the mid length and ends. The other big change is using a larger rod to create a loose, soft bend in the hair. We've also seen a big shift away from the over styled curling iron waves to a more natural air-dry texture.”

Basically, it's all about convenience. Bonus points that you can rock your almost-natural texture as well.

According to Glamour, the technique used on Stone and Goodwin is called "digital wave." The publication states that the style, which is a diluted version of the traditional perm, runs about $350, depending on which salon you go to. That's a whole lot of cash, but perms last about six months, so it's well worth the investment.

Not to mention that you'll spend a whole lot less time getting ready in the morning. Adding semi-permanent waves to you hair makes it easier to get the style wanted without using as many heating products. Another major bonus is that it's not a forever hairstyle, so even if you end up not liking it, it's not forever.

If you're looking to get a perm, there are a few things to know. According to Our Everyday Life, people with dandruff should avoid perms and require the right upkeep to maintain them. The publication warns that you'll also want to make sure to go to a professional salon, since using the chemicals wrong can lead to hair loss. Just a few things to mull over before you decide to go curly.

While celebrities can give major hair inspiration, it's important to know everything you can before you decide to get a similar style. Oh, and maybe take a best friend with you, so you can both spend six months laughing together is the perm doesn't turn out exactly how you envisioned it. Think of it as the grown-up version of a best friend bracelet.