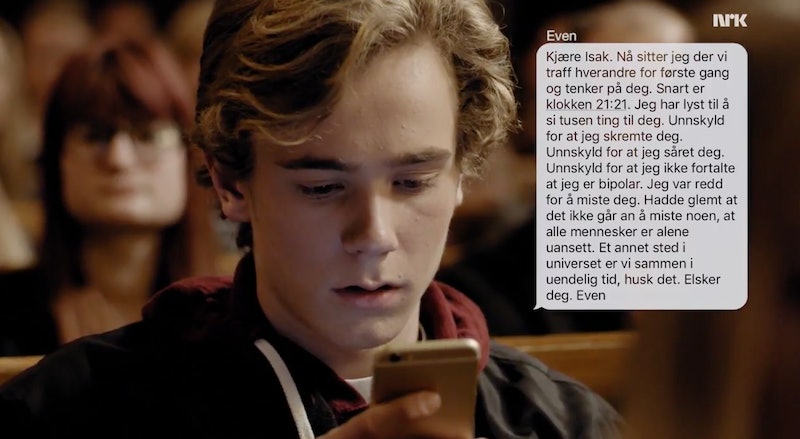 If you've been trying to locate the English-subtitled versions of the extremely cult, addictive Norwegian show Skam, then call off the search party: Variety has reported Facebook will be making an English-language version of Skam. But if you missed the hype altogether, an entirely different question might seem more pressing: what is Skam about, anyway? And why are people so obsessed with it?

The series is like nothing else on television currently and maybe that's why it's makes for such compelling viewing. Part of this is connected to the way it's released. It's a slice of television developed for the internet age; as The Guardian reports, each episode of Skam is first released online in digital shorts corresponding to the exact time in the scene (so if a scene takes place at 2 in the afternoon, that's when the network will drop it online) while fans will sometimes wake up to find scenes aired in the middle of the night. As Dazed Digital reported, these individual Skam scenes are then collected into one episode which is aired at the same time each week, on a Friday.

This digital aspect is strengthened by the fact that text messages form a major part of the plot; they pop up on screen when the lead character reads them so you can read along with the protagonist.

If you want to enhance the feeling this already gives viewers that they're watching a real person live their life, you can even follow the characters on Instagram, where they post photos showing the group of friends viewers have already been following onscreen. The show's emphasis on social media could be part of the reason it's been picked up by Facebook for their new Watch service. This seems implied by what Facebook’s global content chief, Ricky Van Veen told Variety, stating that when he heard about the show "it felt like I was seeing the future of storytelling." This digital element was also stressed by the executive producer for the future project, Simon Fuller, who stated in the same Variety article that "Facebook Watch, with its inherently social components and passionate community of fans that surround it, is the absolute perfect partner for Skam."

Despite the digital aspect, the storyline moves at a much slower pace than the average show aimed at teens (think Gossip Girl, Riverdale, 13 Reasons Why) and part of this is due to the show's emphasis on giving you a deep dive into someone else's head. Each season is delivered from the perspective of a different character in a group of friends attending Hartvig Nissen School in Norway's capital city, Oslo, and each installment of the show uses its airtime to explore serious and taboo topics that don't necessarily get a great deal of air time with delicacy and at length.

As such, Season 1 explored the gradual falling apart of Eva's relationship with Jonas as she tries to fit in at a new school, jealousy, and her feelings of isolation. Season 2 focuses on Eva's friend Noora and dealt with serious issues like date rape and the refugee crisis. Season 3 focused on Isak making peace with his sexuality and on his relationship with Even, a boy suffering from bipolar disorder. Season 4 was the first to be fronted by a woman of color, Sana, and focused on the challenges that she faces in a predominantly white society as a Muslim woman.

Håkon Moslet, head of youth TV at NRK (the television channel that created the show) told The Guardian that this focus on serious topics was meant to form a more realistic representation of one's teenage years. He explained that most drama series "underestimate young people" and that there are "a lot of heavy issues you go through from 15 to 19. At the same time magical things happen." He concluded, "Skam is all those dreadful and beautiful things wrapped into a universe that a lot of people can relate to and engage in."

It'll be fascinating to see if an American version can perfectly replicate the show. Arguably the greatest challenge would be Facebook giving Fuller the OK to replicate the drowsy tempo of the original, with characters stuttering, repeating themselves, or trailing off mid-sentence. This sounds dull, but, once you're hooked, its naturalistic dialogue adds to its intensity, making a conversation about a cheese toastie between two boys flirting feel like the most passionate exchange you've witnessed since you first read about Romeo and Juliet hanging out.

This said, it might be a lot to digest for English-language audiences, accustomed to the mile-a-minute dialogue from Gilmore Girls or the deadpan stylings of Curb Your Enthusiasm or the verbose Game Of Thrones.

The beauty of the show is how Skam manages to be remarkably innovative about well-tread topics — growing up, falling in love, feeling different to those around you. As such, it's honestly hard to imagine that even a worse version of the original would be unwatchable. So, let's call it: if you're not obsessed with Skam yet, then you very soon will be.