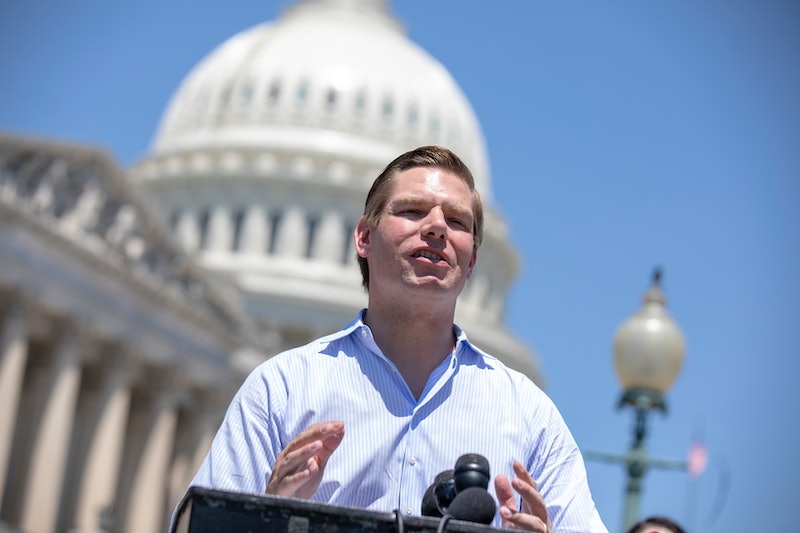 During a taping of The Late Show with Stephen Colbert set to air on Monday night, a California lawmaker announced that he, too, is entering the presidential race. Eric Swalwell is running for president in 2020 — and his candidacy could be history-in-the-making. If elected, 38-year-old Swalwell would become the youngest-ever president of the United States.

As U.S. News and World Report revealed, John F. Kennedy was the youngest person to ever be elected president of the United States at age 43. Though, at 42, Theodore Roosevelt was the youngest individual to ever serve as president, after he was sworn in following the assassination of William McKinley, the outlet noted. Either way, if elected, Swalwell would certainly beat these records by a significant margin. Another 2020 contender, 37-year-old Pete Buttigieg, could also similarly stand to make history, CNBC noted.

During his interview with Colbert, which the late night host shared on Twitter ahead of Monday night's show, Swalwell said that he's running for president because he wants to take concrete actions to help make life better for Americans. As Swalwell told Colbert:

I see a country in quicksand, unable to solve problems and threats from abroad, unable to make life better for people ... None of that is going to change until we get a leader who is willing to go big on the issues we take on, be bold on the solutions we offer, and do good in the way we govern. I’m ready to solve these problems. I'm running for president of the United States.

Swalwell has served as a congressman for California's 15th congressional district since January 2013. As Vox noted, he's a member of two powerful House committees — the Judiciary Committee and Intelligence Committee. Prior to serving in Congress, Swalwell served as the deputy district attorney for California's Alameda County, the San Francisco Chronicle Reported.

In addition to potentially making presidential history because of his age, Swalwell could also break barriers because of his status as a representative. As The Mercury News described, only one other person in American history, James Garfield, has gone directly from serving in the U.S. House of Representatives to the Oval Office. If Swalwell were to secure victory in the 2020, he would be the second individual to make this transition.

Swalwell will kick off his campaign with a town hall meeting on gun violence in Sunrise, Florida on Tuesday, the San Francisco Chronicle reported. The outlet noted that the town is located near Marjorie Stoneman Douglas High School, which endured tragedy after a mass shooter killed 17 individuals on Feb. 14, 2018. As NBC noted, gun control will be a key tenet of Swalwell's campaign, something which he alluded to on Colbert's show.

"I talk to kids who sit in their classroom afraid that they’ll be the next victim of gun violence," Swalwell said to Colbert. "And they see Washington doing nothing about it after the moments of silence and they see lawmakers who love their guns more than they love our kids."

As Swalwell launches his presidential campaign, he's made it clear that he's in the race to win it. "I wouldn’t do it [run for president] unless I thought I could win,” he said to The Mercury News. “If you’re doing it as a vanity project, or to seek some other seat, there’s better ways to do that than taking your family and yourself through ... a presidential run.”