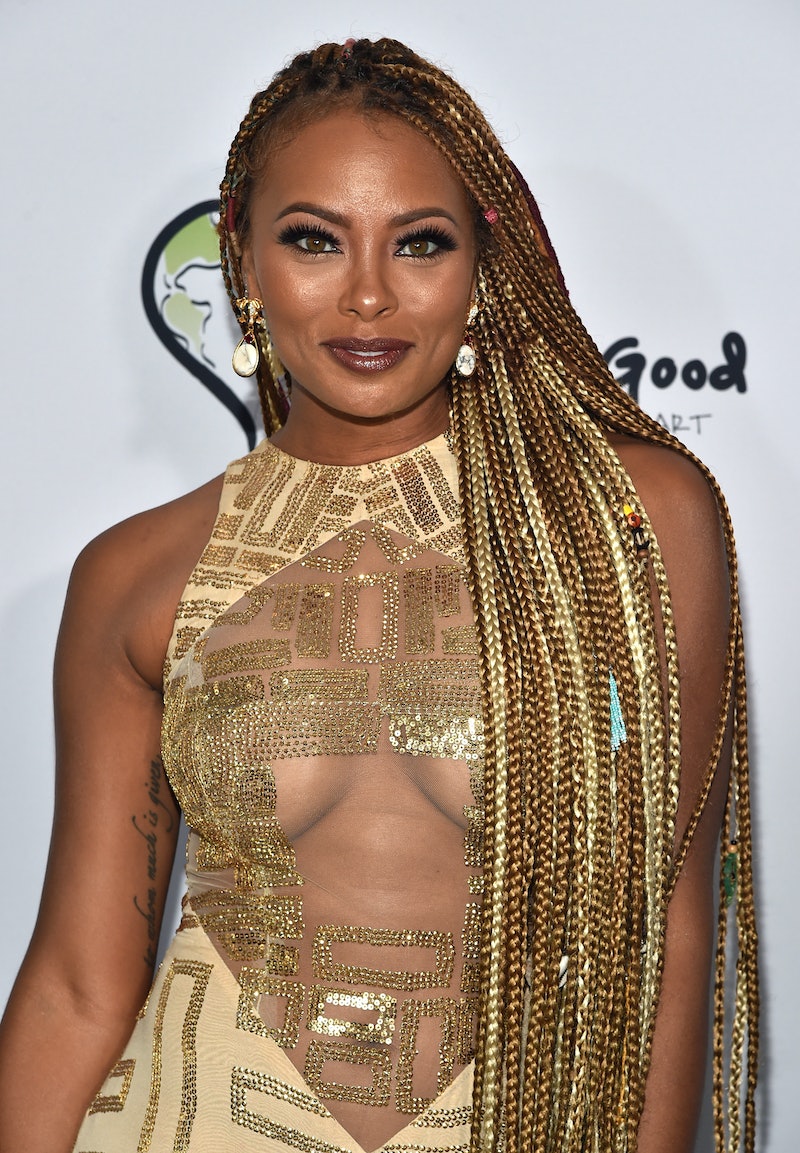 Here's some happy news for this Real Housewives of Atlanta star. Eva Marcille is pregnant with her third child, as she announced exclusively to People in an article published on Wednesday. The Bravolebrity also showed off her baby bump in some cute and funny photographs taken by Terrell Mullin for the magazine. Not only is Eva seen drinking a smoothie in the images, but there are also two eyes and a nose drawn on her belly with a straw coming out of her naval as if the baby is also drinking a smoothie. The maternity shots definitely capture her fun side and show just how excited Eva is to become a mom again.

The America's Next Top Model Cycle 3 winner is currently 17 weeks along. Once the baby arrives, this will be her second child with husband Michael Sterling. They are already proud parents to Michael Todd Jr., who was born in April 2018, and Marley Rae, 5, who Eva had from a previous relationship.

Now that her family is expanding, well, Eva is over the moon. As she told People,

"Michael and I couldn’t be more excited to announce baby No. 3 is on board! Looks like little Michael Jr. is going from the baby to the middle child, and Marley will be the boss of them all!"

Her husband also opened up to People about what a blessing this addition is to both of them and their children. He said,

"It's amazing that God shared his most amazing superpower with us: the power to create and give life. I count it a great blessing to grow our family with the love of my life, Eva Marcille Sterling, and we look forward to welcoming another generation of hope into this world."

When Eva first joined the Real Housewives franchise as an Atlanta Housewife in Season 10, she was pregnant with her second child. She previously told Bustle in 2018 prior to RHOA's Season 11 premiere that she was able to have a bit more fun during her second season because she wasn't expecting another child while filming. "I wasn’t pregnant, so I was able to drink alcohol and really hang out," Eva said at the time. "I had no morning sickness. I wasn’t the newbie, so there was a level of comfort that I had this season, for sure, that I didn’t have my first season."

Like she also told Bustle, finding balance in her life was initially difficult, especially after she and Sterling welcomed Michael Jr. into the world and they got married. "So acclimating to married life, and being a mom of multiple children, and having all these businesses I’m working on full-time, I'm just trying to figure out balance more than anything," she said about what fans would see of her in Season 11, which concluded in April.

Clearly, her life is changing once again. Seeing as Eva has had a lot of practice being a mom of multiple kids, it's probably safe to say she'll do just fine once her third child is born. It's unclear if she's returning to RHOA, but if she does, there's a good chance her pregnancy will be captured and fans will get to see even more sweet footage of Eva's family.