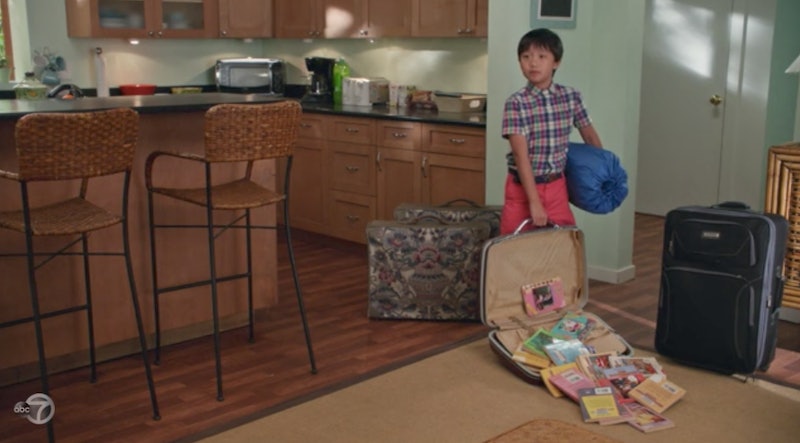 Season 4 of Fresh Off The Boat starts with the Huangs uprooted — in Season 3, they moved to another house so that Evan could go to a fancy private school, and then they decided they didn’t like the big house and wanted their old house. The only problem? There was a tenant in it blocking their return. In the meantime, Honey invites Jessica and family to stay with her and Marvin, and it doesn’t take long before the Huangs have taken over. Eddie is eating all the cereal, Emery is building a birdhouse, and Evan is reading, like the sweet angel he is. When Honey offers some of Nichole’s “more fun” books for Evan to read, she gestures to a shelf of The Baby-Sitters Club series waiting for him. Evan’s response? “I’m sorry, where are your books? Behind this trash? Logan likes Mary Ann? So?” He then walks away.

Normally, I would be offended at someone brutally rebuffing my BSC like that, but Evan is young and doesn’t yet know what’s good for him. But don’t worry — The Baby-Sitters Club books keep looking at him from across the room, beckoning him to take a peek, and soon Evan is invested. He knows where Claudia Kishi hides all of her junk food (the Oreos are her favorite). He knows that Stacey is diabetic and needs to watch her blood sugar. He recognizes that Kristy is take-charge but kind at heart, and he knows that Mary Anne needs to go for what she wants more often. Dawn, well, Dawn and Evan would probably eat the same crunchy California food. Can you imagine what Evan’s Kid Kit would be like? Flawless, I’m sure.

At the end of the Oct. 3 episode, the Huangs are set to leave and as Evan walks out, his suitcase springs open, revealing a bunch of stolen The Baby-Sitters Club books and dumping them all on the floor. “Well, nothing I can say,” Evan says, and continues on.

If Evan loves The Baby-Sitters Club books so much, just wait until he gets to the 1995 major motion picture starring Larissa Oleynik and Schuyler Fisk! If he can’t resist Logan Likes Mary Anne, how is he going to be able to get “the brain, the brain, the center of the chain” out of his brilliant head? And while it doesn’t seem like Evan watches a lot of television, he could go back to the early 1990s and take in the short-lived The Baby-Sitters Club television show. It only lasted for one season, but it lives forever in our hearts. The Baby-Sitters Club even served as a major plot point in an episode of The Unbreakable Kimmy Schmidt, proving that it still holds relevance in today's canon!

If possible, I really recommend that Evan start with the first book and work his way through the series. Then, he should move onto The Baby-Sitters Club: Little Sisters books that document the adventures of Kristy’s little sister Karen. Actually, as the youngest Huang child, Evan would relate to Karen the most. Fresh Off The Boat showed that Evan’s The Baby-Sitters Club love is just getting started, so let’s hope he sticks with it.