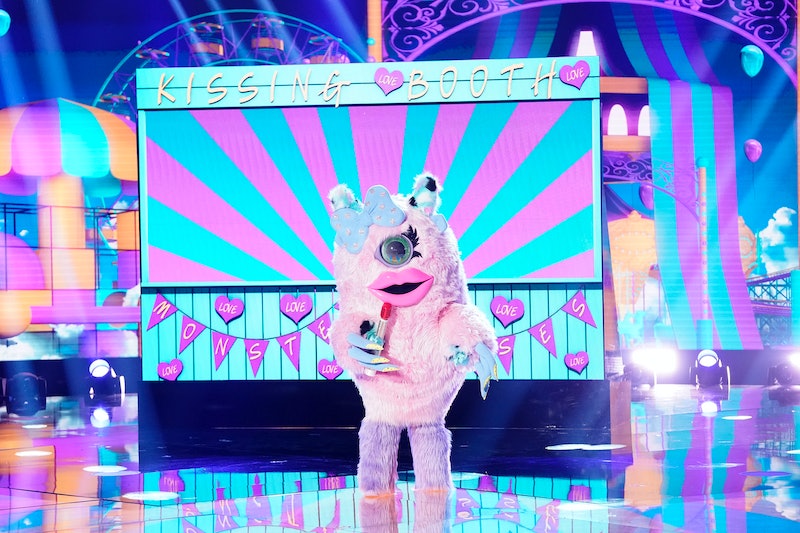 The Masked Singer is back, and with its return comes 18 new celebrity singers all wearing custom-made costumes to keep you from figuring out who they are. So far, 14 Season 3 costumes have been revealed, with the rest expected to debut right before the show's premiere on Feb. 2.

Masked Singer costume designer Marina Toybina told Entertainment Weekly that while Season 1 was just an experiment in seeing what worked and Season 2 had characters with a "more superhero feel," Season 3 will be "much more fashion-forward and modern." The more "modern" looks may also have to do with time constraints: though Toybina’s team had the same time frame as previous seasons, they had to create 18 looks instead of 16 or 12. Here's what they came up with.

A callback to T-Pain's monster costume from Season 1 brought back by popular demand, Miss Monster (pictured above) is easily the most recognizable design of the bunch. "That one was one of the favorites and just being able to create something that was very toylike, was very different from the rest of the costumes," Toybina told EW. "Recreating the Monster again for Season 3 gave us a field to retell a story and bring back a fan favorite and at the same time, do something very different."

In a December promo video, Masked Singer host Nick Cannon delivered the Mouse costume to someone in pink jeans and brown Uggs, with a pink tutu-ed chihuahua at their side.

In the same promo video, Cannon delivered the Robot costume to someone in a cowboy hat and boots out on a farm.

Cannon also delivers the Banana costume to somebody in a changing room, for perhaps a theater or Las Vegas show?

The look seems pretty silly, but Toybina told Entertainment Weekly that they're aware a lot of kids watch the show, and so she likes to create costumes that are "fun and outgoing."

We don't yet have any clues about the Kangaroo, but when Masked Singer debuted the costume on Instagram, they said that they would be donating to WIRES, who help rescue and care for the wildlife affected by the Australian fires. Is it too obvious that the singer could be Australian?

We also don't have any details about the Turtle, other than the fact that the leather clad, mohawk-ed look may be a reference to the singer's punk or hard rock background?

"This season the one thing that’s been missing was creating some sort of warrior character," Toybina told EW. "With the White Tiger, I want to do something that was a little bit inspired by an Egyptian influence. And when we found out who was cast for it, it was just a perfect fit."

She further hinted that he's "fun, outgoing, incredible" and "definitely larger than life on stage."

We have no info about the Frog yet, but perhaps the zoot suit hints that they're an older or more classically trained singer?

Llama's costume is pretty weird in that they're connected to a pair of back legs, which seems like it would seriously hamper the performer's ability to dance. Perhaps that means this is an older singer as well?

Honestly, who knows. A chef, maybe? Yet another YouTube or Twitch star?

Another tough one. Could the Swan an Olympic athlete? Natalie Portman?

Though there are no Astronaut clues yet, the design on the chest feels reminiscent of the steampunk design from Wayne Brady's Fox.

Last season we had a can-can dancing Flamingo, and this season there's a Burlesque Kitty.

The technicolored Bear is more of the cute and cuddly variety than a grizzled predator.

Keep your eyes peeled for the remaining four costume reveals.