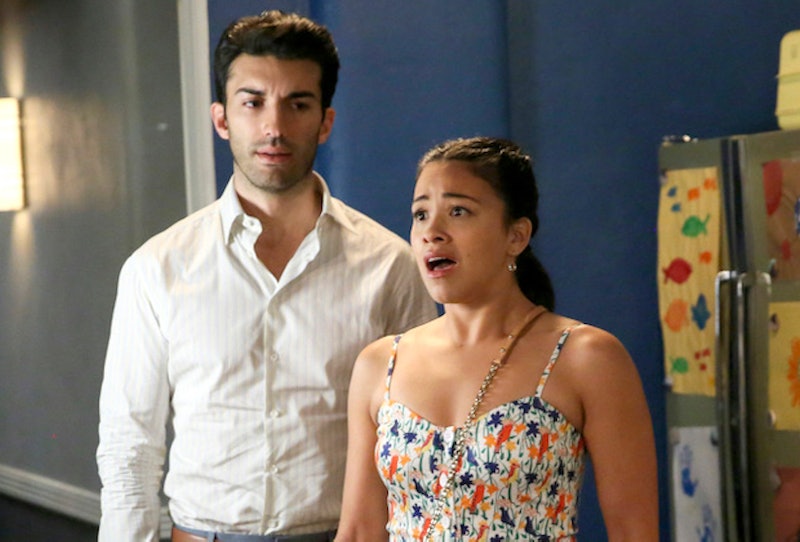 It's safe to say that the past four seasons of Jane The Virgin have been full of twists, turns, and surprises. And maybe, if we're being honest, confusion. That's why it's worth taking a quick look back at the CW show before it says it's final goodbye. When we say quick, we really mean it since we've summed up every Jane The Virgin season in one sentence. Yes, one, mind you, very long sentence that has as many twists and turns as the JtV season it's recapping.

This helpful guide is for those who've seen the show and need a refresher, or those who don't have the time to watch every season right now but don't want to be left out of the conversation. It's a quick recap that will breakdown everything that's happened before Jane The Virgin Season 5 to get you up to date. Well, maybe not everything, since breaking down all the telenovela goodness that is packed into this show would take quite awhile.

Let's just say this is a show that knows how to craft nail biting cliffhangers that must be seen to be believed, which is why these single-sentence breakdowns strictly focus on the most important elements of Seasons 1 through 4. For all the intricate details and supporting characters, you're going to have to actually watch the entire series. And seriously, you really should!

So maybe think of this as the perfect primer (or refresher) to remind you why so many have loved getting to know Jane, the virgin mom, played by Gina Rodriguez, who's grown up a lot over the last four seasons. So cue, Our Narrator: And friends, it's time to recap what happened on Jane The Virgin. HOW EXCITING!

Jane is artificially inseminated with Rafael's sperm, resulting in a love triangle that puts her relationship with Michael on hold as she prepares to become a mom, only to find that she and her new son have somehow gotten themselves mixed up with the notorious drug lord Sin Rostro.

Jane struggles to co-parent with Rafael, who is expecting twins with his ex Petra and is still fighting with Michael for Jane's affections, despite the fact that he's busy trying to catch Sin Rostro and another crime boss named Mutter, who may or may not be his mom.

Jane finally marries Michael — and loses her virginity — only to see their happy ending turn tragic, and a time jump attempts to reset things for a more hopeful future that gives us Jane, the single mom, the published writer, and the ordained minister.

The craziest season, which is really saying something, has Jane and Rafael planning their future together, Petra finding her match and making a murderous reveal, Alba finding love (and country), Xo dealing with a health scare — oh, and a Michael twist so insanely good we're still shook.

And now, you're all caught up for the fifth and final season of the series, which creator Jennie Urman Snyder promised will come full circle. “There are moments that we’re actively calling back" Urman told TVLine. "So that’s fun.”

So fun, in fact, you might just want to start your Jane The Virgin rewatch now because one sentence just can't do this show's brilliance justice.