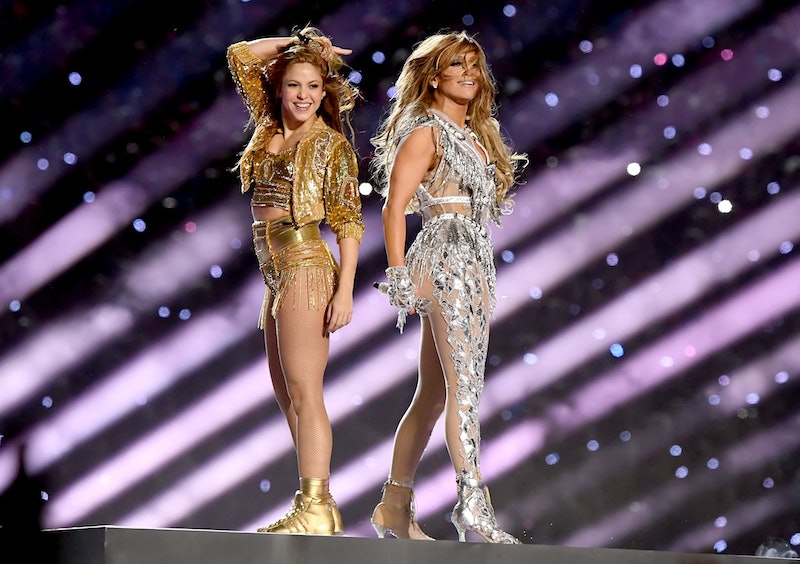 If you're still trying to process J.Lo and Shakira's 2020 Super Bowl halftime performance, you're not alone. The two took to the stage on Sunday evening for a whirlwind, career-spanning medley of their greatest hits, including guest appearances from Bad Bunny, J. Balvin, and Lopez's daughter Emme Muniz. It all happened so fast, you may not have caught every song they performed — or it's possible you blacked out from sheer excitement. Whichever the case, here's a breakdown of each track.

Clad in an ultra-sparkly red fringe two-piece, Shakira kicked things off with "She Wolf" from her 2009 album of the same name.

She then transitioned to this rock-tinged power ballad from her self-titled 2014 LP.

Shakira carried right on into her infectious 2001 single, which helped her break big in the United States.

"I Like It" By Bad Bunny, J Balvin, And Cardi B

After bringing Bad Bunny onstage, Shakira subbed in for Cardi B on the ubiquitous, Latin-infused "I Like It."

"Jenny From The Block"

Enter J.Lo, who made. an. entrance. by ripping off a flowy pink satin skirt to reveal a black, studded leather one-piece with matching chaps, all while singing her timeless 2002 track "Jenny from the Block."

She followed it up with the slow-bounce "Ain't It Funny," which she originally recorded for The Wedding Singer but instead featured on her self-titled 2001 album.

J.Lo accompanied this horn-accented 2005 number with a knee slide across the stage.

After a quick change into a silvery, mirrored bodysuit, she pole-danced to "Waiting for Tonight" in an homage to her (sadly not Oscars-nominated) Hustlers role.

Then came the semi-more recent, Pitbull-featuring 2011 tune "On the Floor" (although Pitbull was not in attendance).

And at last, J.Lo's daughter — alongside an entire children's chorus — joined her onstage for a rendition of "Let's Get Loud," which they paired with the chorus of "Born In the U.S.A."

To close it all out, Shakira returned for a hip-shimmying, aerobatic-filled duet of "Waka Waka."

More like this
Twitter Is Freaking Out Over Rihanna’s 2023 Super Bowl Halftime Show Announcement
By Stephanie Topacio Long
Lizzo Twerks While Playing James Madison's 200-Year-Old Crystal Flute Onstage
By Radhika Menon
Everything To Know About Taylor Swift’s 10th Studio Album, 'Midnights'
By Grace Wehniainen and Jake Viswanath
Stormzy Made A Passionate Speech About The Importance Of Diversity
By El Hunt
Get Even More From Bustle — Sign Up For The Newsletter