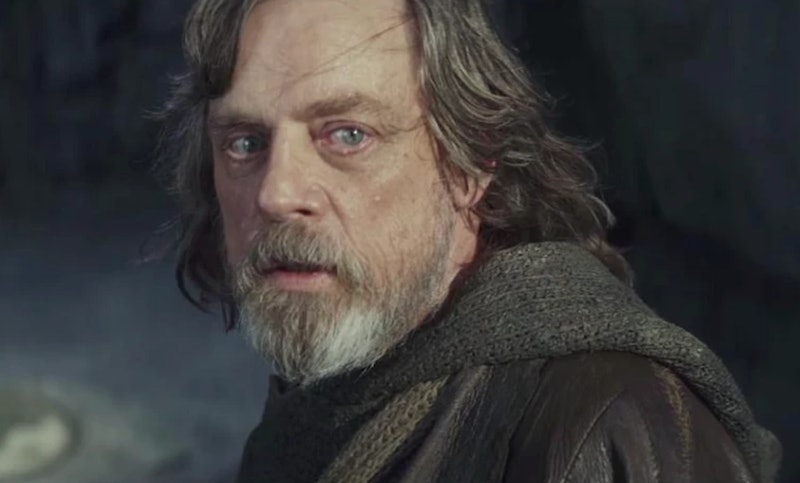 In its latest issue, Vanity Fair is giving fans a behind-the-scenes look at Star Wars: The Rise Of Skywalker, in theaters December 20, with help from photographer Annie Leibovitz. In the feature, fans get a first look at Mark Hamill's Luke, who appeared to die in the final moments of the film as he fought off Kylo Ren using the power of the Force. In this new shot, Luke is reunited with his old pal R2-D2, quite fitting since this is the last chapter in the Skywalker saga.

While Hamill all but confirmed he'd be back for Episode 9 on Jimmy Kimmel Live!, this is actual proof that he'll appear in the movie. Of course, the photo isn't giving away how he returns — in a flashback? as a Force ghost? — and neither is its caption. "Speculation is rampant about who will 'rise' as the Skywalker of the movie’s title," Vanity Fair wrote, "and how that choice will reflect the way the world has changed since Star Wars debuted in 1977."

Episode 9 also marks the return of the Knights of Ren, who were the mysterious masked warriors that first popped up in The Force Awakens in Rey's vision after she touches Luke's lightsaber. While it's unclear the Knights' connection to Ben Solo's turn to the dark side, knowing what we know, it's possible they might have a connection to Luke's return.

As Vanity Fair pointed out, in Rey's vision, just before the Knights of Ren show up, she saw "a hooded Luke Skywalker and the droid R2-D2 huddled against a shower of sparks. The implication is that Luke’s dismay and Kylo’s rampage are all connected by the fiery destruction of a Jedi temple that sent Luke into hiding long before the events of the new trilogy."

In Leibovitz's photo, Hamill's Luke is standing with R2-D2 in front of an inferno, perhaps a hint that we're going back to that moment in The Rise Of Skywalker to see the rise of Kyle Ren. That moment could also be the inception of the Knights of Ren, who Vanity Fair think could be Luke's Padawan students that Kyle took with him as the temple burned.

As for Kyle Ren and Rey's relationship it appears it's going to get even more complicated in this new movie. Vanity Fair showed a shot of the two of them in a water-filled lightsaber battle, but Adam Driver told the magazine that his character's connection with Rey, what he called their "maybe-bond," could run deeper than we know. Could they both share Skywalker blood as so many have guessed? We'll have to wait and see.

What fans did see in Vanity Fair's cover story is a few new characters including Star Wars' latest villain Allegiant General Pryde, played by Richard E. Grant, who is spending some quality time with General Hux (Domnhall Gleeson), which is never a good sign. Fans also got a first look at Keri Russell's mysterious character Zorri Bliss, who is wearing a giant, bronze helmet, which VF noted is similar to what Boba Fett wore. Could Zorri be a new bounty hunter for fans to be obsessed with?

The new Star Wars movie might be the last of the Skywalker Saga, but it's clear from these new photos everyone is going out in style.

More like this
The 'Bachelor In Paradise' Schedule Shifts To 4 Hours Every Week After The Season 8 Premiere
By Brad Witter
The 50 Most Powerful Characters In The Marvel Universe, Ranked
By Johnny Brayson and Nola Pfau
Lin-Manuel Miranda & Tituss Burgess React To 'Little Mermaid' Casting Backlash
By Radhika Menon
Nicola Coughlan Shared A Lady Whistledown Excerpt From ‘Bridgerton’ Season 3
By Grace Wehniainen, Alyssa Lapid and Sam Ramsden
Get Even More From Bustle — Sign Up For The Newsletter