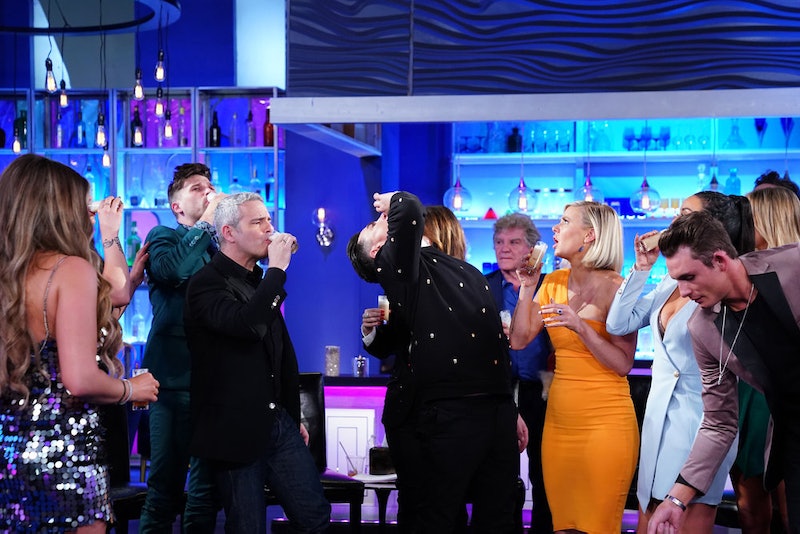 Vanderpump Rules Season 7 was like watching traffic on the freeway — things flowed along naturally, but eventually, you just knew that there would be some sort of pileup. There was plenty of drama this season, but the aforementioned pileup turned out to be the Vanderpump Rules reunions — all three parts of it. There were secret breakups, screaming matches, and a moment that almost came to blows, and yet almost no clarification on what to expect in Vanderpump Rules Season 8.

Most of the drama during the reunion surrounded James Kennedy and his general mistreatment of... well, everyone else on the show. James tends to think that saying bad things and halfheartedly apologizing for them means he's "working on himself," and this was the first season that the women — especially Katie Maloney — said that enough was enough and essentially got him fired from SUR. So, in true James form, he was at the reunion to fight everyone — even Lisa, who has been his champion the whole time. Things that also happened: everyone cried at least once, and Tom Sandoval took Andy Cohen on an ill-fated motorcycle ride. Here are some questions, though, that Season 8 still needs to answer.

Will Raquel Take James' Place On The Show?

James' tenure on Vanderpump Rules seems dead in the water. No one wants to be around him, let alone film with him. But we did get the news that Raquel, James' girlfriend, will be working at SUR, which is surely a ploy by Lisa Vanderpump to get James to stay on the show. But does this swap mean that Raquel will now get more screen time than James? Stay tuned.

Jax hates James, but Tom likes James. That's what they seemed to be fighting about at the reunion, but is that worth ruining a friendship and declaring that Tom doesn't have to be Jax's best man in his wedding? There's something deeper happening here that Season 8 might explore further.

Will Jax Make Up With His Mom?

Jax is currently estranged from his mother because she didn't tell him how sick his father was before he died, and as a result, he didn't get to say goodbye to his dad. As of the reunion, they are still not speaking, but let's hope that they can reach out to each other again so that Jax's mother can at least be there for her only son's wedding.

Will Stassi & Beau Get Engaged?

Everyone agrees that Stassi and Beau are Vanderpump Rules' newest OTP, and an engagement seems like the next step for these two lovebirds. Pretty much the entire cast has been hinting it's on the horizon, so hopefully we'll get to see Beau pop the question in Season 8.

Will Kristin Move On From Carter?

Kristen admitted that she and Carter were broken up but still living and sleeping together. So even though they're saying they're both single, it sounds like the two haven't officially parted. Time will tell if Kristen ends up taking him back, or if she finds a new man in Season 8.

Will We See Lala's Wedding?

Lala basically declared Randall, her fiancé, too important to be on Vanderpump Rules, much to the chagrin of everyone else on set. Does that mean that their wedding won't air on the show? Randall may stay out of the spotlight, but it seems silly for Lala to not share the biggest day of her life when she shows (almost) everything else.

Whether or not Season 8 answers these (and more) questions, it's sure to be an exciting one — Vanderpump Rules never disappoints.