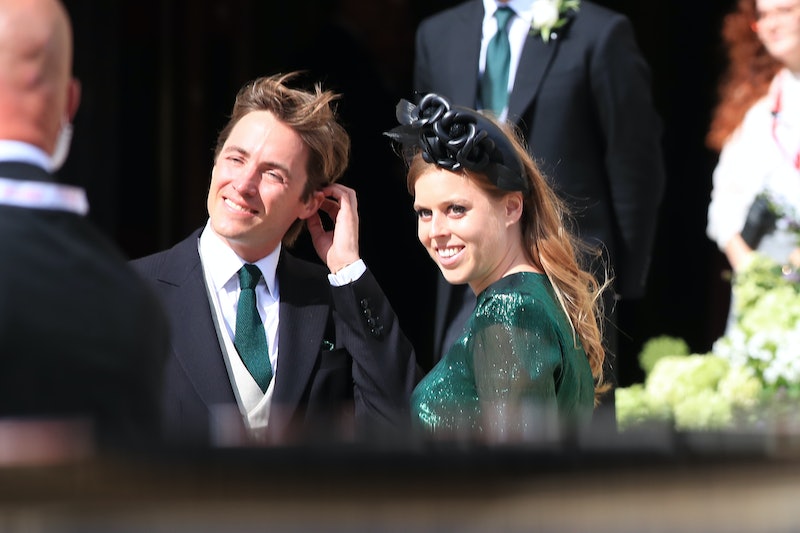 It was last September that Princess Beatrice announced her engagement to Edoardo Mapelli Mozzi, and since then, royal watchers have been counting down to the wedding itself. The multi-millionaire property proposed while on a weekend away in his native Italy, according to the statement released at the time. "We are both so excited to be embarking on this life adventure together," it read. Their nuptials were slated for 2020, but no further details were known about the big day – until now. Here's a handy guide to everything we know about Princess Beatrice's wedding so far.

When are Princess Beatrice and Edoardo Mapelli Mozzi's getting married?

The first announcement said 2020, but HELLO! reports that the wedding date has been narrowed down and is due to take place on May 29. Buckingham Palace has yet to confirm the date.

Where will the wedding itself take place?

The official statement released by the Palace said: "Her Majesty The Queen has kindly given permission for the ceremony to take place at The Chapel Royal, St James's Palace. The ceremony will be followed by a private reception, given by The Queen, in the gardens of Buckingham Palace."

Chapel Royal has hosted a number of royal weddings and christenings – including Queen Victoria's marriage to Prince Albert of Saxe-Coburg in 1840, and the then Duke of York and Princess Victoria Mary of Teck (later King George V and Queen Mary) in 1893. The church holds regular services which are also open to the general public.

A wedding at Buckingham Palace, sounds like a grand affair?

Yes and no. The Queen will host the private event in the gardens of Buckingham Palace, making this the first nuptials to be hosted at the monarch's official London residence since Prince William and Kate Middleton's own (very, very formal) wedding in April 2011.

But, unlike Kate, Meghan Markle and Princess Eugenie’s own royal weddings, Princess Beatrice’s nuptials will not be televised and are reportedly set to be a "low-key" affair, according to Fox News.

Who will be invited to the "low-key" wedding?

Notably, the bride-to-be's father, Prince Andrew, was absent from the engagement celebration. According to The Sun, Andrew decided not to attend the party because he thought it might be a “bad look” and could open the other guests to criticism.

Will Prince Andrew be at the wedding, then?

Prince Andrew's friendship with Jeffrey Epstein has caused huge controversy for the royal family. Most recently, he was accused by prosecutors of providing "zero-cooperation" in the matter. However, as the father-of-the-bride, he is expected to be present at the nuptials and play a significant role.

The designer behind any royal wedding dress is a closely guarded secret, so likely to remain firmly under wraps until the big day. That said, the royal family does have a tradition of calling upon British designers for their wedding dresses. The Queen wore a Sir Norman Hartnell design when she wed Prince Philip in 1947. Kate Middleton entrusted Alexander McQueen's Sarah Burton with her wedding dress. Meghan Markle's gown may have been Givenchy, but it was in fact designed by the famous maison's British creative director, Clare Waight Keller. (Plus Stella McCartney for the evening do.) And Princess Eugenie turned to London-based brand Peter Pilotto for her big day.

So who could Princess Beatrice turn to? London-based fashion favourite Erdem, royal go-to Jenny Packham and couture house Ralph & Russo are all contenders. According to The Daily Mail, Princess Beatrice reportedly wants her wedding dress to "channel" her husband-to-be's Italian heritage. It was also suggested that the Princess was spotted in Caroline Castigliano's boutique in Knightsbridge. We'll be waiting with bated breath.

More like this
Why Princess Anne Will Remain Princess Royal For Years To Come
By Sophie McEvoy
The Prince William & Rose Hanbury Rumours, Explained
By Frances Stewart and Sam Ramsden
A Familiar 'Sex Education' Star Just Got A Major Role In Fantasy Teen Drama 'Silver'
By El Hunt
8 Photos Of Prince George & Princess Charlotte At Queen Elizabeth II's Funeral
By Jake Viswanath
Get The Very Best Of Bustle/UK