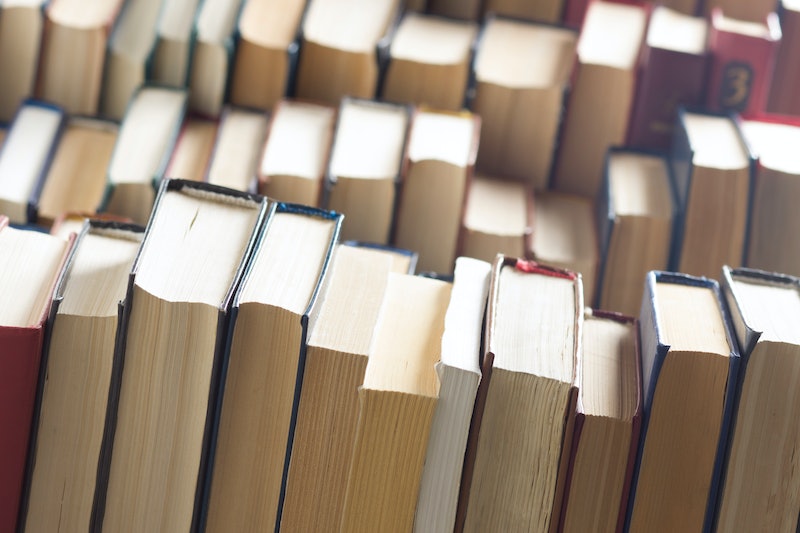 Readers are no strangers to arguing. In fact, there's a long list of things book-lovers can't stop fighting about: Whether to organize libraries by author or genre, whether its OK to read the movie tie-in edition of a book, and how much reading is, in fact, enough reading. But one of the biggest ways that all bibliophiles disagree, often to the point of heated and impassioned debates, is about the ways readers physically treat their books. Do you dog-ear or use a bookmark? Do you underline and highlight, or stick with removable sticky notes? Do you crack the spine? Do you?! It's all argued for or against in a myriad of ways. That's why Anne Fadiman's essay, "Never Do That To A Book," from her 1998 release Ex Libris: Confessions Of A Common Reader, will be familiar to anyone who has ever called themselves a book person.

The essay starts with Fadiman recounting a family trip to Europe. While at their hotel, Fadiman noticed that her brother, Kim, had taken to leaving his book facedown on the nightstand to hold his place. This quirk didn't escape the notice of people who worked in the hotel, either.

"...As he had done every night of his literate life," Fadiman writes, "Kim left a book facedown on the bedside table. The next afternoon, he returned to find the book closed, a piece of paper inserted to mark the page, and the following note, signed by the chambermaid, resting on its cover: SIR, YOU MUST NEVER DO THAT TO A BOOK."

"My brother was stunned. How could it have come to pass that he — a reader so devoted that he'd sneaked a book and a flashlight under the covers at his boarding school every night after lights-out, a crime punishable by a swat with a wooden paddle — had been branded as someone who didn't love books?"

And that's just it, isn't it? The real reason why readers get so heated up when their own personal physical treatment of books doesn't match other readers' — we're afraid that everyone else loves their books the right way and we're just a wannabe, defiling the good name of bibliophile. Because if keeping your books pristine and never scratching, bending, folding, underlining or otherwise marking them up in any way means you love your books, then what does that say for the person who writes all over the pages, folds back the cover, cracks the spine and otherwise roughs them up almost beyond recognition? And vice versa?

Fadiman relates that she, her father, brother, and husband all subscribed to the same rough and tumble method of reading books, affording her a sort of familial vindication of loving a book to pieces — so much so that some now need to be kept together in a plastic bag. But even as she espouses the benefits of being a such a reader, Fadiman doesn't ignore the stories of her friends who have decidedly different ways of treating their books.

There's the pal who told her that breaking a book's spine was emotionally equivalent to breaking his own spine. And another who bought at least two copies of every book "so that only one need be subjected to the stress of having its pages turned." Once she gets to discussing the use of bookmarks — from her aunt's preciously placed reproductions of Audubon paintings to the friend who trapped interesting bugs from her trip through Yucatán in the pages of her Edgar Allan Poe collection — it becomes clear, to both Fadiman and the reader, that it really does take all sorts to be a book lover.

She writes, "I came to realize that just as there is more than one way to love a person, so is there more than one way to love a book." And, in fact, she comes to the conclusion that there are two different ways to show how much you care about your books: courtly love or carnal love. Forget grouping your friend by Hogwarts House... this is the personality test that really matters. She writes:

"The chambermaid believed in courtly love. A book's physical form was sacrosanct to her, its form inseparable from its content; her duty as a lover was Platonic adoration, a noble but doomed attempt to conserve forever the state of perfect chastity in which it had left the bookseller. The Fadiman family believed in carnal love. To us, a book's words were holy, but the paper, cloth, cardboard, glue, thread and ink that contained them were a mere vessel, and it was no sacrilege to treat them as wantonly as desire and pragmatism dictated. Hard use was a sign not of disrespect but of intimacy."

But the best part is that neither of these methods of bookish affection are wrong or right, better or worse, than the other. Both have pros and cons, arguments for and against. And in the end, what matters most is the reading, absorbing the great stories both true and imagined, that the pages contain.

Just make sure your keep your pencils away from mine.