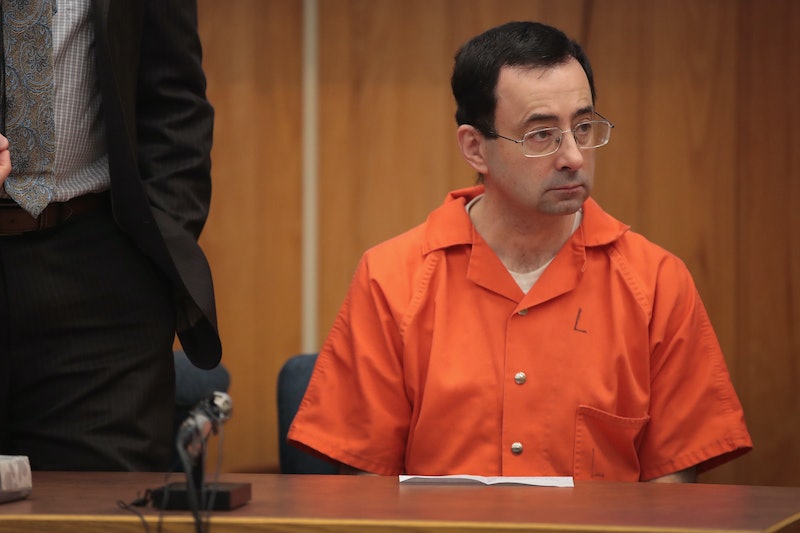 Yet another person has formally accused one of the most notorious athletics doctors of sexual assault. In a new lawsuit, an ex-MSU athlete accused Larry Nassar of rape, alleging that Nassar drugged and raped her during a medical appointment in 1992. The lawsuit, which names Nassar, MSU, the Board of Trustees, and others, also alleges that the assault was videotaped, and that former MSU athletic director George Perles actively covered up the assault after it was reported.

"We are deeply sorry for the abuses Larry Nassar has committed, and for the trauma experienced by all sexual assault survivors," MSU tells Bustle in a statement. "Sexual abuse, assault and relationship violence are not tolerated in our campus community. While the protocols and procedures mentioned in this lawsuit do not reflect how sexual assault claims are handled at MSU, we are taking the allegations very seriously and looking into the situation.

The school went on to say that it is "working diligently to create a campus community where all feel safe to study and work free from the threat of sexual misconduct and relationship violence."

Earlier this year, Nassar was sentenced to 60 years in federal prison for child pornography charges, and then to sentenced to an additional 175 years in state prison for charges associated with molesting seven girls. Over 250 women in total accused Nassar of sexual abuse, much of which occurred under the guise of medical treatment.

The new lawsuit, recently filed in a federal court in Grand Rapids, Mich., claims that a Nassar drugged and raped a female field hockey player, who became pregnant from the assault, though she eventually miscarried, according to the Lansing State Journal.

The lawsuit claims that the woman told her coach, Martha Ludwig, about the alleged rape. Ludwig then allegedly confronted Nassar, demanding that over the recording he allegedly had of his appointment with the student in question, per the lawsuit. However, when Perles, who is currently a trustee at the university, heard about the report, the lawsuit alleges that he forced Ludwig to return the recording. Perles then, according to the suit, forced Ludwig to resign and sign a non-disclosure agreement.

Perles has not yet commented on the allegations.

Jim Dunlap, the current head of police at MSU told the Lansing State Journal that the idea that campus police wouldn't investigate an incident from the athletics department was "nonsense."

"It just doesn’t happen," he said. "We just don't do things that way."

The lawsuit is the latest round of legal actions taken against the defamed athletics coach, though it is unsure whether or not it will result in another high-profile round of trials.

More like this
Chris Kaba's Family Continue Fight For Justice After Viewing Police Bodycam Footage
By Sophie McEvoy
Black History Month UK’s 2022 Theme Calls For Action, Not Words
By Maxine Harrison
Mel B Speaks Out Against Domestic Violence In A Powerful Speech
By Sophie McEvoy
Romance Authors Are Mobilizing For Reproductive Rights
By Natalia Perez-Gonzalez
Get Even More From Bustle — Sign Up For The Newsletter