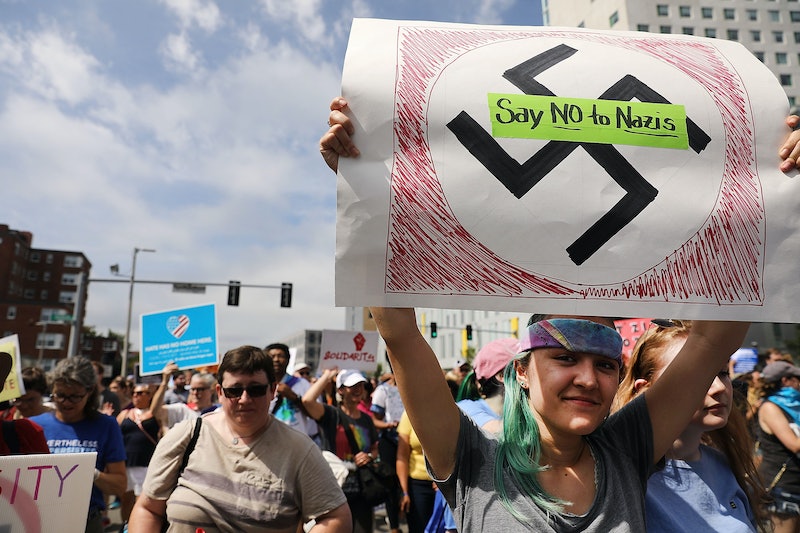 On Tuesday, Facebook announced that it removed 32 accounts based on what it identified as “coordinated inauthentic behavior.” In a post it published, the site noted that one of the pages it removed was responsible for setting up the counter-protest, "No Unite The Right 2," and that the page for that event has been deleted. But David Robin of Millennials for Revolution, an organization involved with the counter-protest, tells Bustle that it is "definitely still happening."

New efforts implemented after the discovery that the Russian-based Internet Research Agency (IRA) used Facebook to influence the 2016 presidential election helped Facebook to find Resisters, the page it says founded "No Unite The Right 2." Resisters reached out to five real organizations to co-host the counter-protest, according to Facebook, although the the event page listed over 30 groups who appeared to be involved with the event.

Other organizations involved have said that they were already planning counter-protests to "Unite The Right," a white supremacist rally, before working with the one created by Resisters.

“We originally began laying the groundwork for the event after Jason Kessler announced that he would be holding a ‘Unite The Right’ rally in D.C. on the anniversary of last year's Charlottesville protest,” says Robin. “We created our own Facebook event but soon joined the ‘No Unite the Right 2’ event that was being organized by Workers Against Racism, Smash Racism DC, and other groups organizing on the ground in Washington.”

The Aug. 12 counter-protest is being organized by the Shut It Down D.C. Coalition, which includes groups such as Black Lives Matter, Smash Racism D.C., and March for Racial Justice. In a statement clarifying the role Resisters had in "No Unite The Right 2," the coalition said, “The event was created by Resisters but was used for legitimate protest organizing and promotion.”

It went on to stress the offline efforts they had made, saying, “The Shut It Down DC Coalition has been meeting for weeks. We took over the Facebook event created by outside groups, in a desire to keep it accountable to local organizers.”

Even though the page initially created by Resisters has been shut down, the Shut it Down D.C. Coalition appeared to have started a new page almost immediately entitled “Hate Not Welcome: No Unite The Right 2.” Hundreds of people are listed as “interested” and some logistics for the event, such as protest permits, have already been handled.

Some organizing groups also expressed outrage that Facebook would remove an event against the alt-right movement, while they have refused to shut down content related to Nazism and racism in the past. “It's strange that Facebook would target people organizing a response against hate, rather than the groups that are actually planning a nazi rally just steps from the White House,” Robin says.

The Shut it Down D.C. Coalition pointed out that Facebook reportedly banned groups currently involved in the "Hate Not Welcome" rally. “They regularly suspended Black Lives Matter chapters, Antifa Groups, and BLM member accounts, they said. “They have taken down real organizing.”

Facebook noted that it does not immediately know who is responsible for the bad actors that it has removed. “Some of the activity is consistent with what we saw from the IRA before and after the 2016 elections,” Nathaniel Gleicher, Facebook’s head of cybersecurity policy, said in a statement. “And we’ve found evidence of some connections between these accounts and IRA accounts we disabled last year, which is covered below. But there are differences, too.”

Robin insists that the groups organizing the counter-protest “were not misled by any foreign actors.” Shut It Down D.C. focused on the original purpose of the "Hate Not Welcome" rally, saying “We do not organize because of Russia, we do this to make sure our loved ones, communities, and neighborhoods stay safe from fascists in, and out of, uniforms.”