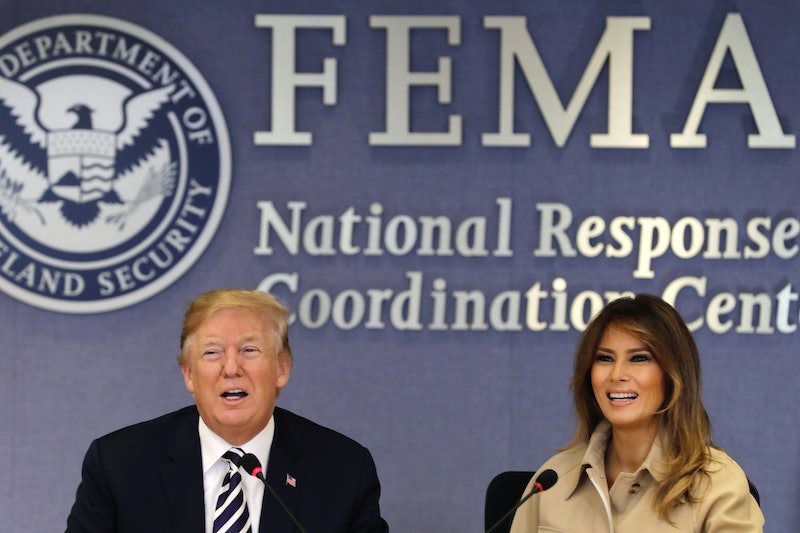 The Trump administration is under fire for appearing to transfer money from the country's top disaster response agency FEMA to fund immigrant detention. Nearly $10 million in FEMA money went to ICE for detaining immigrants, or so say documents released by Sen. Jeff Merkley (D-Oregon) on Tuesday.

The Department of Homeland Security did not deny the transfers are legitimate to Bustle, but a spokesperson did downplay their significance with regards to FEMA's budget, and especially its disaster response funds. DHS said the money came from an operations account, which the spokesperson said covers everything from training to office supplies and "cannot be used for disaster response."

Merkley first gave the documents to MSNBC's Rachel Maddow, who ran a story on the transfers Tuesday evening. The senator, who sits on the Senate Committee on Appropriations, said that the way he reads the documents, the money did come from dollars that could be spent on disasters response. "It says that money came from Response and Recovery right on it," Merkley told Maddow.

"$10 million comes out of FEMA when we’re facing a hurricane season knowing what’s happened last year," Merkley added. “And look what we’ve had since, a hurricane just barely miss Hawaii. ... Now we have this hurricane, Florence, bearing down on the Carolinas.”

The transfers also came just as the "zero tolerance" immigration policy came into force. That policy, among other things, led to the separation of children from their parents at the border.

DHS spokesman Tyler Houlton took to Twitter to refute Merkley's version of the events saying that it was "a sorry attempt to push a false agenda at a time when the administration is focused on assisting millions on the East Coast facing a catastrophic disaster."

Houlton added that "the money in question — transferred to ICE from FEMA’s routine operating expenses — could not have been used for hurricane response due to appropriation limitations."

The FEMA spokesperson Jenny Burke also tweeted to attack the senator. "After calling @SenJeffMerkley staff to inform them of the facts surrounding @FEMA budget we were told 'It’s a TV hit, you take it where you can” - regardless of the facts?'"

The DHS directed Bustle to both of these tweets as a part of its response to the allegations. Bustle also reached out to Merkley's office for comment.

One thing is clear, though, from the documents released by the senator publicly on Twitter. They do support his assertion that it has "Response and Recovery right on it."

The money is listed as from "FEMA" with the appropriation level "Operations & Support." But then there are PPA levels listed too, which are "programs, projects, and activities" — the next level of detail beyond the appropriation level. DHS could not immediately provide Bustle an explanation as to why PPA levels such as "Response and Recovery - Recovery" and "Preparedness and Protection" were listed.

Whether or not the money could have been used for disaster relief — or not, as DHS tells Bustle — the amount of money is relatively tiny. DHS claims the nearly $10 million makes up just 1 percent of their operational account and that they have another $25 billion in their coffers to use during a disaster. ICE's budget, on the other hand, rounds out at $7.6 billion in 2018. Also with a "b."

$10 million appears to be just a drop in the bucket for both.