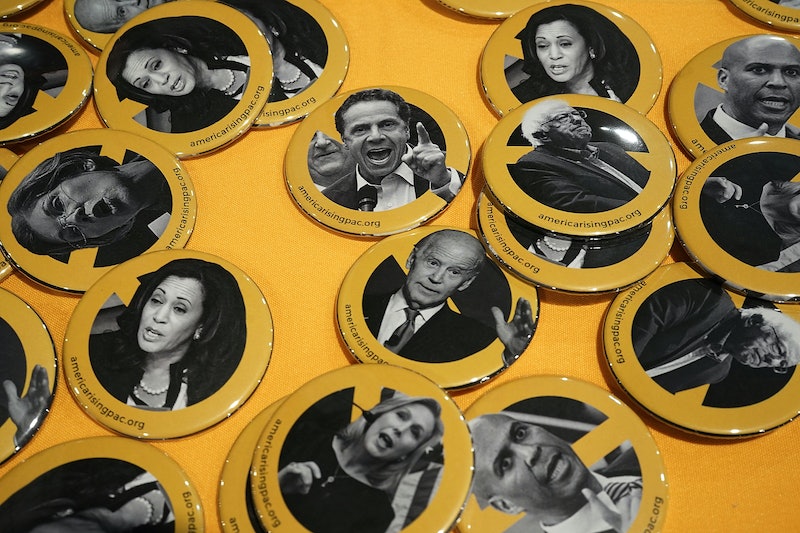 Researchers at Northeastern University School of Journalism have discovered what they believe is a "disconcerting trend" in the media's coverage of the 2020 presidential race. After analyzing 130 articles pulled from the five most-read online news outlets, they found the media was consistently tougher on female 2020 candidates, often describing them more negatively than their male counterparts.

"Female candidates running for president are consistently being described in the media more negatively than their male counterparts," researchers involved in Northeastern University School of Journalism's Storybench 2020 Election Coverage Tracker have said.

As part of their election coverage analysis, researchers at Storybench examined how the media has been covering 2020 contenders, with a particular focus on the 2020 Democratic candidates they feel have so far been "the most prominent candidates in the race:" Sens. Cory Booker, Kirsten Gillibrand, Kamala Harris, Amy Klobuchar, Bernie Sanders, Elizabeth Warren, and former Rep. Beto O'Rourke. According to researchers, Sanders ranks first in terms of most positive net sentiment, followed closely by Booker and O'Rourke. Warren, Klobuchar, Harris, and Gillibrand all trail behind, with researchers finding smaller percentages of positive words used in coverage pertaining to them.

"One possibility is that the four female candidates have simply been dealing with scandals at a higher rate than their male counterparts," researchers noted, citing Warren's ancestry test, Klobuchar's comb incident, Harris' history as a prosecutor, and reports on how Gillibrand's office reportedly handled sexual assault allegations. "But another possibility is that the women are simply facing more scrutiny than the men."

To analyze the sentiment behind media coverage for each candidate, Storybench pulled, at random, more than 100 articles (of 500 words or more) from CNN, The Washington Post, The New York Times, Fox News, and The Huffington Post, all news websites Amazon's Alexa credited as being the nation's top five most-read news sites. Storybench researchers also said their findings should be viewed with a degree of skepticism as they're based on early data. "The sentiment scoring is imperfect, and despite doubling our dataset, it is still too small to draw any certain conclusions," they said.

But the theory that female presidential candidates are more intently scrutinized by the media isn't new. In fact, much has been written about the sexist criticism 2016 Democratic nominee Hillary Clinton received in comparison to the men she ran against. When she raised her voice she was being "shrill" (a shouting Sanders, meanwhile, was impassioned). Her laugh was a "cackle" (as in a witch's). When she contracted pneumonia on the campaign trail she was "physically unfit to be president."

What's more, as Amanda Marcotte noted in an essay for Salon that was published earlier this year, Donald Trump "was widely perceived as the 'authentic' candidate" and touted as being "in touch with the common man" despite his wealth and proven falsehoods. Clinton, on the other hand, was often viewed as being "inauthentic" and/or "dishonest" due to how the media covered her, Marcotte said. Debates over candidates' authenticity have, according to Marcotte, already shown similarly sexist patterns in 2020 coverage. She noted that all of the prominent female 2020 candidates were "getting saddled with this narrative of inauthenticity."

While it may be too early to draw concrete conclusions from 2020 election coverage, Storybench researchers are certainly right about one thing: election coverage deserves scrutiny. As Storybench's Alexander Frandsen and Aleszu Bajak previously put it, "If the media serves as the watchdog of the election, then someone has to keep an eye on the watchdog, too."