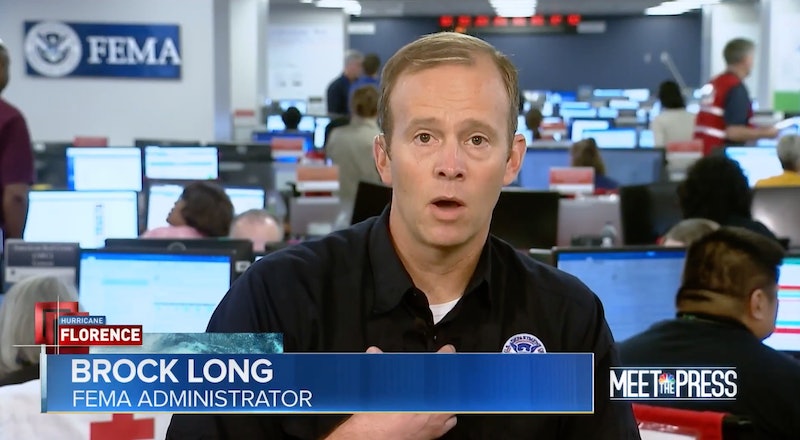 In an interview with NBC's Meet The Press on Sunday, FEMA Administrator Brock Long made a weird comment about spousal abuse while defending President Trump's Hurricane Maria tweet.

The interview started off normal enough — at least for someone who is defending Trump's denials of the nearly 3,000 American deaths in Puerto Rico. Long said Trump was being misinterpreted. "I think the president is being taken out of context there," Long told Meet The Press host Chuck Todd. "The numbers are all over the place. FEMA doesn't count deaths. And if you take what's going on with Florence, the deaths that are verified by the local county coroners are the ones that we take."

A study by George Washington University's Milken Institute School of Public Health found about 2,975 more deaths in Puerto Rico from September 2017 to February 2018, according to CBS News. Trump called the study a partisan attack.

"What we’ve got to do is figure out why people die from direct deaths, which is the wind, the water and the waves, buildings collapsing, which is where the 65 deaths came from," Long said, incorrectly referencing the Puerto Rican government's initial death toll of 64, according to CNN.

Then, Long said the number of indirect deaths may increase over time. "And then there’s indirect deaths. So, the George Washington study looked at what happened six months after the fact, and you know what happens is, and even in this event, you might see more deaths indirectly occur as time goes on because people have heart attacks due to stress," he said.

Long said people may suffer injuries from repairs or auto accidents. "They fall off their house trying to fix their roof," he explained. "They die in car crashes because they went through an intersection where the stoplights weren’t working."

Then, the FEMA administrator seemed to imply that spousal abuse might be to blame for some of the deaths and injury after the devastation of Hurricane Maria.

"You know the other thing that goes on. There’s all kinds of studies on this that we take a look at. Spousal abuse goes through the roof. You can’t blame spousal abuse, you know after a disaster, on anybody," Long said. Bustle has reached out to Long's office for comment.

After that bizarre comment, Long repeatedly praised Trump, saying the president has been "incredibly supportive" of his agency.

"And the president’s very passionate about the work we’ve done. He's been incredibly supportive of me and the staff. He's actually, I'll bet he's probably the only president that's held two cabinet-level meetings, brought his entire cabinet to this agency to show support," Long said.

On Sunday morning, Trump's support of FEMA was extended to Twitter. "FEMA, First Responders and Law Enforcement are working really hard on hurricane Florence," Trump tweeted. "As the storm begins to finally recede, they will kick into an even higher gear. Very Professional!"

Speaking of needing support, The Washington Post reported on Saturday that Homeland Security Secretary Kirstjen Nielsen is looking into replacing Long, even though there is no deputy at the agency. Last week, Politico reported that Long is being investigated by Department of Homeland Security inspector general for alleged misuse of government vehicles for commutes to his home in North Carolina.

During a briefing on Thursday, Long said the agency will be cooperating with the investigation. "I would never intentionally run a program incorrectly. Doing something unethical is not part of my DNA, and it is not part of my track record in my whole entire career. We will work with the OIG."