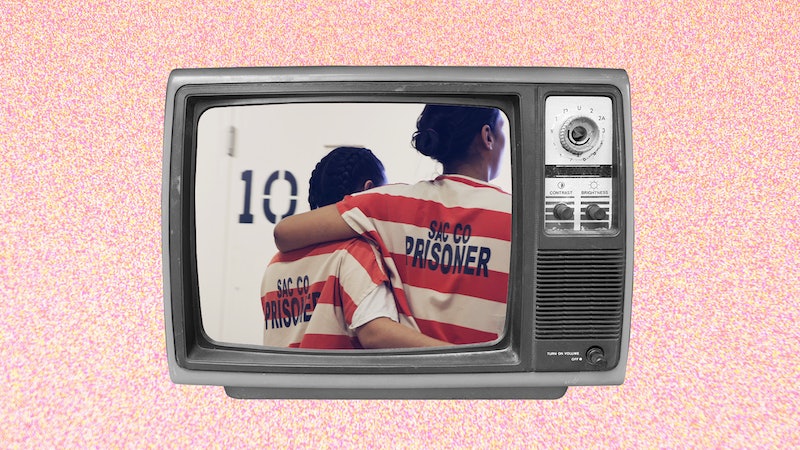 It's easy to forget that there's someone behind the camera capturing every moment of your favorite reality show. But in the case of Jailbirds on Netflix, the story of how producers went behind bars to film the show is equally as interesting as what you see on screen. As part of Bustle's Behind Reality series, we talked to Jailbirds executive producer Rasha Drachkovitch about what it's really like to create a reality show inside a jail.

Few people look forward to going to jail or prison, but veteran reality TV producer Rasha Drachkovitch has made doing so his calling card.

"Someone from my company is usually in prison every day filming — and it’s a good thing," the president of 44 Blue Productions says. It sounds like a quip Drachkovitch has repeated countless times before, though it's understandable if that's the case. As executive producer of MSNBC's long-running prison docuseries Lockup and Netflix's new reality series Jailbirds, Drachkovitch has nearly 20 years of experience capturing the day-to-day life of inmates, and fielding questions about his job from those curious about what it's really like to film a TV show behind bars.

Decades later, the workings of the prison system still fascinate him. "[Going to jail] is kind of the extreme human experience, right?" he says. All it takes is one mistake on the outside, and suddenly you're turning your civilian clothes in for a jumpsuit, being searched intimately for contraband, and getting assigned a cell block. "Their life really is turned upside down."

It's undoubtedly an intense and life-changing experience, one that most civilians haven’t witnessed first hand. But bringing a camera crew into a jail to make a television show is complicated, both ethically and logistically. Drachkovitch spoke to Bustle about everything that goes into producing a reality show in such extreme conditions, from finding the right location to remaining out of harm's way while capturing conflicts on camera.

Getting In (Without Committing A Crime)

Because jails and prisons are deliberately closed off from the outside world, convincing the heads of a facility to allow a crew to film there is often a futile task. Even a veteran producer like Drachkovitch admits that access is one of the biggest challenges in producing these kinds of shows. "I would say 99 percent of [correctional facilities] don't want cameras there," he notes, adding that this is especially true because his crew asks to embed in the jail or prison for an extended period of time.

Drachkovitch was able to move forward with Jailbirds because the Sacramento County Jail, where he had previously filmed episodes of his show Lockup, was open to his crew returning. But having a pre-existing relationship with a jail's staff doesn't guarantee the rest of the production process will go smoothly. Everybody who appears on camera must consent to being filmed, and not everyone is interested in being documented in this environment. As a result, choosing who becomes a part of the cast is often a combination of logistics and judgment calls.

"We identify very quickly who’s comfortable on camera, who’s gonna sign a personal release, and then obviously those people become the focus of the show," Drachkovitch says. But the fact that Jailbirds is focused on the jail experience, which is by nature more fluid than the prison experience, means that there were even more hurdles to finding interesting characters who the show could reliably follow throughout their stay. While eagle-eyed producers could do some planning to identify potential emotional events worth filming during an inmate's incarceration, like upcoming court hearings or expected visits from family members, their cast members are still ultimately at the mercy of the system, which could transfer them elsewhere at any time.

"We’d follow a storyline with one inmate, and next thing you know we'd find out, oh, she got shipped out last night and that story just kind of dead ended," Drachkovitch laments. Just as quickly, though, somebody new might be processed in, and the show could gain a new character. It's an inconvenient byproduct of capturing the transient nature of jail life, but Drachkovitch thinks it adds to Jailbirds' authenticity, too.

"We like to say there are no second takes in jail," he laughs. "You can’t go like, 'Listen, can you hop back in and repeat that?'"

It takes experience and patience to get inmates, many of whom are seasoned criminals and skilled manipulators, to open up authentically on camera to a bunch of strangers. It doesn't happen overnight; instead, it requires developing trust and a relationship between the crew and the subjects, be they inmates or staff members. Drachkovitch finds that the best way to facilitate this relationship is by having a crew embed in the jail or prison. For Jailbirds, that meant having a crew filming near-constantly at the Sacramento County Jail for four months in a two weeks on, one week off system.

"It's that kind of feel-out process," Drachkovitch explains. "When we first come in, we're a novelty. We're breaking the monotony up... there's a lot of profanity, there’s a lot of, 'We don’t want anything to do with the show.'" But by the next month, there's usually a little more curiosity about the show. By the third month, the crew and the inmates start to get pretty comfortable with one another, and many are ready to share their stories.

No matter how comfortable the crew may get filming behind bars, there's always a chance that they'll bear witness to violent conflict. While Drachkovitch says there were no moments on Jailbirds where the crew truly feared for their safety, in his years of experience, he's had plenty close calls.

"You can just tell sometimes. I've been in a lot of these situations where you can just see something's going on, you know, there’s an undercurrent," Drachkovitch says. Being a good producer means being able to remain calm while filming without becoming a part of the story, he adds. If things escalate, the camera operators can lower their cameras to be less of a distraction, and slowly back away for safety.

Even with safety protocol in place, filming in a jail or prison isn't for everyone. "It's eye opening when you go [film] behind bars for the first time, ‘cause you’re like, 'Whoa, what is this world about?'" Drachkovitch says. "And then once you're past it a few times, either it’s like, 'You know, I might go back to cooking shows,' or, 'I want to go to the next one.'"

For Drachkovitch, it's the relationships that the crew forms with the staff and inmates that keep him coming back. "While it can be dangerous and it can be intimidating, there's a lot of heart and humor inside jail," he says. Life on the inside isn't all making pruno, selling contraband, and feuding with other inmates — there are genuinely touching emotional moments (like a wedding in Jailbirds) too.

"You want to see the optimism in everybody’s story," Drachkovitch says. One of the reasons he's attracted to telling inmates' stories is because he loves a good redemptive arc. Seeing someone own up to mistakes and learn from them is powerful, not only for the subject, but for viewers who can witness a cautionary tale that still has a hopeful resolution.

Life, though, doesn't always have a neat and satisfying resolution, and for Drachkovitch, filming the sometimes-frustrating missteps of inmates when you're rooting for them is the toughest part of the job. Because jail is either a stepping stone back to the free world or into the prison system, Jailbirds has some tense moments as inmates' cases — and therefore their futures — hang in the balance.

Though they may not be fun to watch, these moments of reckoning and human failure are an essential part of understanding life behind bars. "The show is basically holding up a mirror to the world," Drachkovitch says. Whether you like or dislike what you see in the reflection, it doesn't get much realer than that.

More like this
What Is 'Pretty Wild' Star Tess Taylor Up To Now?
By Morgan Leigh Davies
Here’s When You Can Expect More ‘Indian Matchmaking’
By Brad Witter
How To Stream 'Pretty Wild'
By Arya Roshanian
Friend Of The Family Kidnapper Robert Berchtold Saw Jan Broberg Again In 2004
By Brad Witter
Get Even More From Bustle — Sign Up For The Newsletter