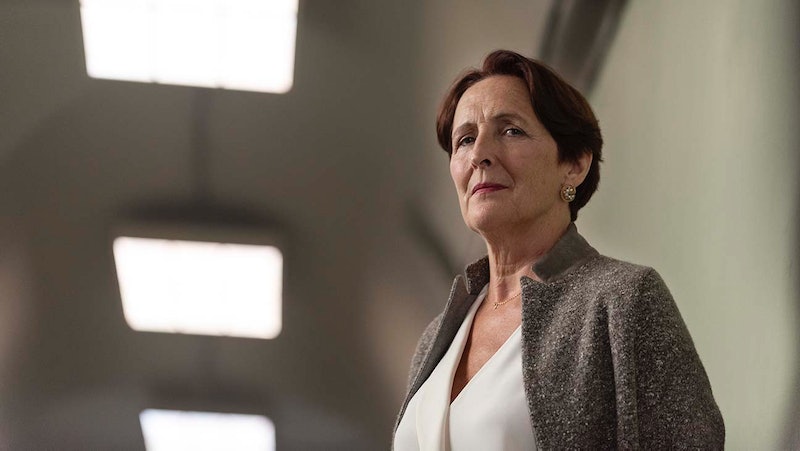 Killing Eve was one of last year's stand-out hit TV shows and the second season is just about as hotly anticipated as they come. But did you know the show is based on a series of books called Villanelle? Yes guys, the show that you are obsessed with has books for you to retrospectively read. However, there is one thing you will notice is very different in the books. In the Killing Eve book, one key character was a man.

Yes, that right guys. In Luke Jenning’s book series, the coolheaded MI6 agent acting as Eve Polastri's boss was in fact a male character. However, during casting, director Phoebe Waller-Bridge and her team decided to change things up and made the very smart decision to cast Fiona Shaw in the role. It was Sally Gentle, a producer on the show, who spilled the tee on the switch up during a press screening of the second season, according to Stylist.

Shaw, who won a BAFTA for her portrayal of Carolyn Martens, is one of the best parts of the show IMO, and the Irish actor has previously described the role as "probably the greatest pleasure of [her] life," the Irish Mirror reports. Fiona — the feeling's mutual.

Stylist reports that, at the press screening, Gentle explained that, after reading the books, the producers loved the interaction between the female characters and wanted to intensify that by casting Shaw.

"We read Luke's books and really liked them and enjoyed this female assassin and the fact there were two women. But actually, to give that a female spin and to tell that story by a woman is, we felt, a far more interesting way into it and something that we hadn’t really seen before."

She went on to say the desire was to move away from the tired and stereotypical depiction of the female spy. They wanted more than just a sexy female who's only role is super male gaze-y:

"You've seen female assassins actually behaving in quite a sort of two dimensional way. Having a woman write it, giving all those layers to all those women in all the roles actually is what excited us."

And, when it comes to Shaw's character, multi layered would be an understatement. Not only is Carolyn the multifaceted high-powered woman we all dream of being, but that some of us dream of dating.

With the second series of Killing Eve due on UK TV on June 8, fans are gearing up for another round of their favourite show. I'm *so* excited for dark humour, thrills, and of course one of the strangest and most complex relationships that has ever graced our screens.

The trailer hints at a whole lot more of the intense connection between Villanelle and Eve. Speaking to the Evening Standard, Sandra Oh described the show's uniqueness and appeal:

"We understand what a drama, thriller or comedy genre is but Killing Eve is a real mash of all those three. This cast is phenomenal because everyone is grounding their performance in their own truth."