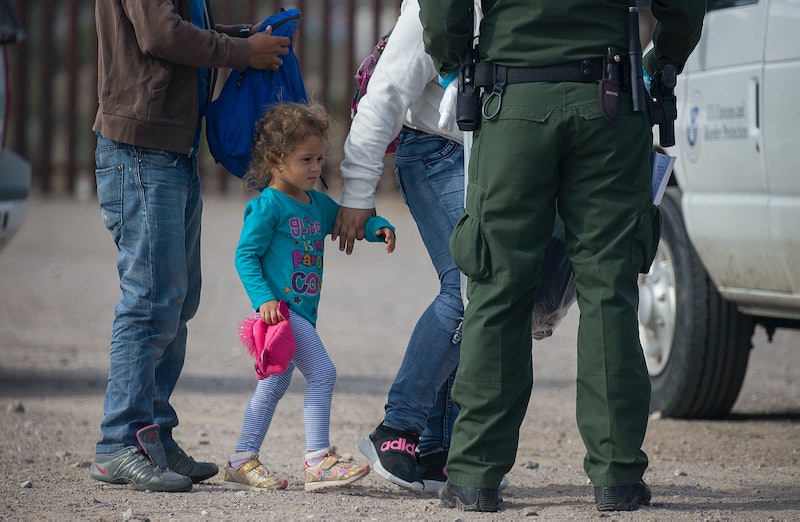 Following another surge in unaccompanied migrant children seeking asylum at the southern border, the Trump administration has a new plan to shelter them. Having already filled permanent and temporary — tent city — government shelters, the Trump administration plans to house unaccompanied child migrants at Fort Sill, where an internment camp in World War II held Japanese Americans against their will, TIME reports.

Fort Sill is an active Army base in Oklahoma, and it was also used by the Obama administration in 2014 during another surge in arrivals of unaccompanied migrant children. According to TIME, Army personnel will not oversee the children, but rather members of the Department of Health and Human Services (HHS). Bustle has reached out to the White House and HHS for comment.

The use of a base once used to deprive American citizens of their freedom solely due to their ethnicity comes at a time when the Trump administration is making cuts to the support offered to unaccompanied migrant children. Just last week, HHS informed shelters around the country it would no longer pay for English lessons, legal support, or recreational equipment for the children, New York magazine's Intelligencer reported.

According to The New York Times, the Office of Refugee Resettlement — an HHS agency — would be able to place 1,400 children at the facility. That's in addition to a new shelter in Carrizo Springs, Texas, that could hold 1,600 and a possible customs port in New Mexico that is being considered for use as a shelter, the paper reported.

Other military bases in Georgia and Montana were considered, but not selected. TIME reported last week that the option in Montana, Malmstrom Air Force Base, is home to more than 100 intercontinental ballistic missiles complete with nuclear warheads. They are buried underground on the site.

Fort Sill has a "hard-sided" structure to house the children, according to the Military Times. Support buildings will be "soft-sided." Politico coverage from 2014 said that the base has a "three-story barracks and training building" complete with 20 sleeping bays.

Under Obama, the plan to house migrant children at the base prompted an outcry from Oklahoma's Republican delegation to Congress. "President Obama needs to stop putting the onus on our military to manage his crisis, and he needs to prioritize solutions that will quickly reunite these children with their families in their home country," Sen. Jim Inhofe said in a statement obtained by The Hill in July 2014.

When the Obama administration closed the shelters, they suggested it was not the best way to house the children — but also that the number of arrivals played a role. "We are able to take this step because we have proactively expanded capacity to care for children in standard shelters, which are significantly less costly facilities," an HHS spokesperson told Politico in August 2014. "At the same time, we have seen a decrease in the number of children crossing the southwest border."

ABC News reported that the current system to house unaccompanied child migrants has been operating at about 90% capacity on average, with some peaks as high as 97%. The news outlet added that there are about 13,350 children currently in the Office of Refugee Resettlement custody.

That number could continue to rise; The New York Times reported that 11,507 unaccompanied migrant children were picked up in the month of May alone.

More like this
6 Organizations Fighting Police Brutality That You Can Support Right Now
By Syeda Khaula Saad and JR Thorpe
Watch Jacinda Arden’s Devastatingly Honest Resignation Speech
By Sam Ramsden
Eurovision Has Been Given A Whole New Look Ahead Of Its Liverpool Debut
By Bustle UK
This Is When Netflix Is Going To Start Charging You For Sharing Passwords
By Darshita Goyal
Get Even More From Bustle — Sign Up For The Newsletter
From hair trends to relationship advice, our daily newsletter has everything you need to sound like a person who’s on TikTok, even if you aren’t.