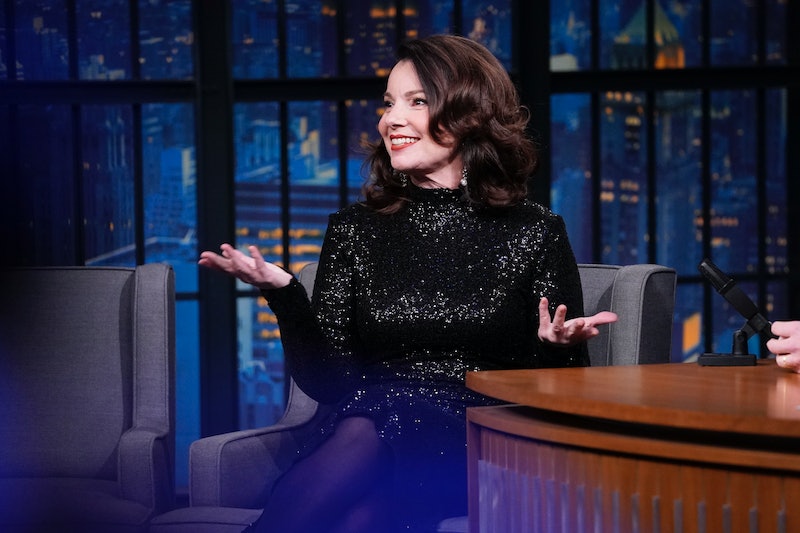 Sometimes, it's hard to remember that the President of the United States was actually onetime just a random New York celebrity. During a recent visit on Late Night With Seth Meyers, Fran Drescher recalled working with Donald Trump on The Nanny when he served as a guest star back in 1996, and noted that the now-president made a very odd request during his brief time on set. The episode, titled "The Rosie Show" featured Trump, who played himself, as a rich friend of Mr. Sheffield. However, how rich he was, exactly, proved to be a topic of much debate.

"I stood in this scene, and I said to the two of them, ‘All you millionaires are alike,'" Drescher recalled to late night host Seth Meyers. After the take, Drescher recalled, Donald Trump's assistant sent production a note saying, "Mr. Trump is not a millionaire. He's a billionaire and we'd like you to change the script." It's easy to see the former Apprentice host making such a request, though Drescher was determined to push back against it. She insisted it didn't feel right for her character, whom she felt would never use the term "billionaire."

"I thought that seemed too on the money because I know Fran would have described anyone who was rich as a millionaire," Drescher explained. "But to say billionaire seems like a specific choice." So, as a solution, she came up with a compromise that she felt stayed true to Fran Fine's personality — while also satisfying Trump's massive ego. "We asked him if it would be OK if we wrote 'zillionaire,' and he said that was fine," she added.

And just in case there's ever any doubt about the truth to her story, the former Nanny star went on to mention that her former husband, Peter Marc Jacobson, who co-created the show with Drescher, still has the note to this day, which could now be worth a pretty penny, given that Trump is now the president of the United States. "Peter somehow knew that he shouldn't throw that away and he has it framed in his office," she revealed.

Maybe Trump's next move could be a zillionaire cameo in The Nanny broadway musical that Drescher, Jacobson, and Rachel Bloom currently have in the works. Stranger things have happened.

More like this
Netflix Reveals First Look At Wednesday In The 'Addams Family' Spinoff Series
By Bustle Editors
A New 'And Just Like That' Table Read Pic Confirms A Key Character's Return
By Jack Irvin and Grace Wehniainen
The 'Skins' Cast Shared The Reunion We’ve Been Waiting For
By Sophie McEvoy
24 Years Ago, 'Friends' Dropped Its Most Underrated Ross & Rachel Episode
By Grace Wehniainen
Get Even More From Bustle — Sign Up For The Newsletter