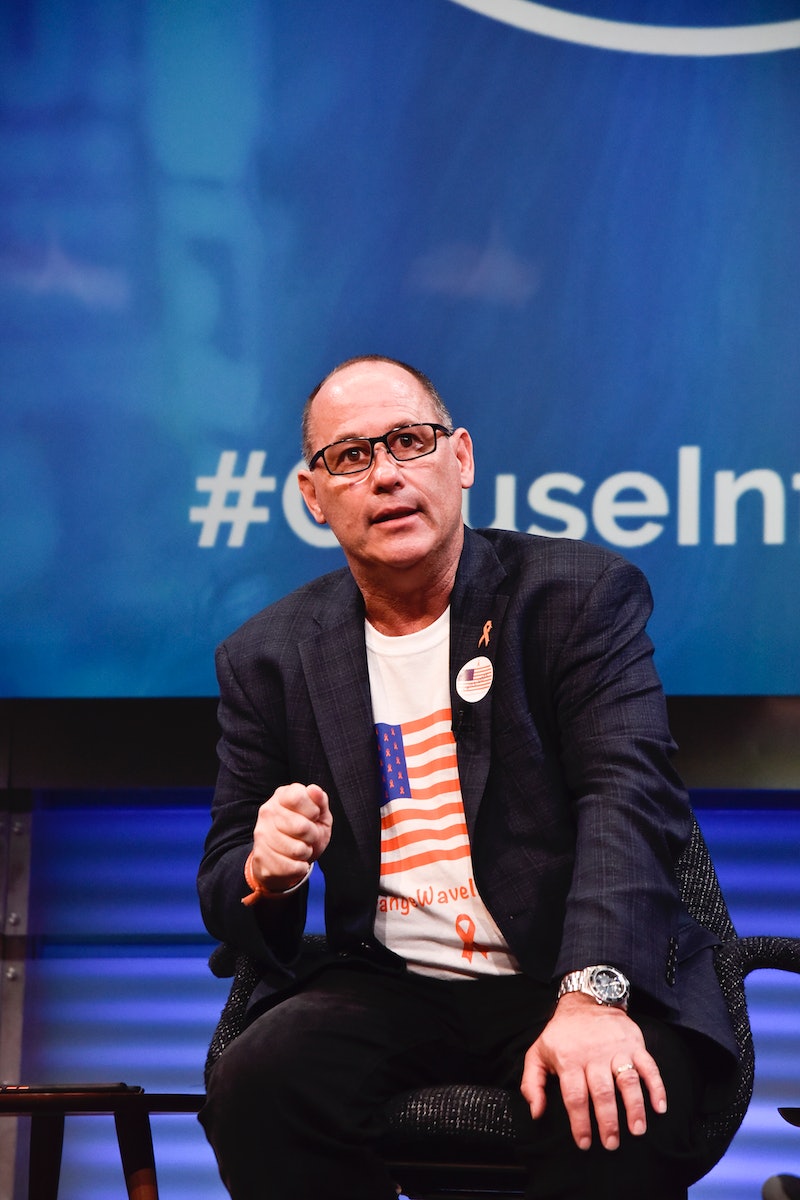 During his testimony in front of the Senate Thursday, Supreme Court nominee Brett Kavanaugh vehemently denied having sexually assaulted Dr. Christine Blasey Ford, and lamented the toll that Ford's accusation has taken on him. Later in the day, Parkland father Fred Guttenberg said that Kavanaugh's testimony proved that he's a "partisan," and condemned the judge for characterizing himself as a victim.

"Judge Kavanaugh, I listened to you talk of your life being ruined. It is not," Kavanaugh tweeted Thursday. "I listened to you turn yourself into a victim. You are not. What today showed is that you clearly are a partisan and do not have the temperament for the court. Even worse, you are just a bad person."

Fred Guttenberg's daughter was killed in the shooting at Marjory Stoneman Douglas high school in February. He's since become a vocal activist against gun violence, and has often criticized Republicans for opposing stronger gun laws. He met Kavanaugh briefly during the latter's initial confirmation hearings, but Kavanaugh, who's broadly opposed restrictions on firearms in the past, refused to shake Guttenberg's hand when approached.

Ford alleges that Kavanaugh pinned her to a bed, attempted to take off her clothes, groped her, and pressed his hand against her mouth when she tried to scream when the two were at a party in the early 1980s. Kavanaugh denies that, and the other sexual misconduct allegations that have been made against him, and both he and Ford testified before the Senate on Thursday regarding the allegations.

Kavanaugh was defiant during his testimony, frequently proclaiming his innocence and lamenting that his "good name" has been ruined by the multiple sexual assault allegations against him.

"My family has been destroyed by this," Kavanaugh said when asked if he'd support an FBI investigation into Ford's claims. "Destroyed." He later reiterated that the accusations against him have "totally and permanently destroyed" his family and his name.

The judge's attempts to depict himself as a victim have been aided by several Republican senators. Lindsey Graham accused Ford of participating in a "drive-by shooting" of Kavanaugh and suggested that, if Senate rejects his nomination to the Supreme Court, it will "ruin Judge Kavanaugh's life," while Ted Cruz focused on the fact that Kavanaugh may no longer be allowed to coach girls' basketball.

On Twitter, Guttenberg laid into the idea of "Kavanaugh as a victim" and contrasted his difficulty getting confirmed as a Supreme Court justice to the experience of losing a child to gun violence.

"The Kavanaugh as victim really infuriated me," Guttenberg tweeted. "He is not. He is a guy who screwed up and is facing reality. My family and I, we are victims of gun violence. I never get my daughter back. He deeply misunderstands what it means to be a victim."

The Senate Judiciary Committee approved Kavanaugh's nomination on Friday, and Republican leadership had planned to put him up for a full vote on Monday or Tuesday. However, that vote was delayed after multiple Republican senators demanded that the FBI conduct an investigation into Ford's allegation against Kavanaugh. President Trump ordered such an investigation later in the day, and it's expected to conclude within a week.