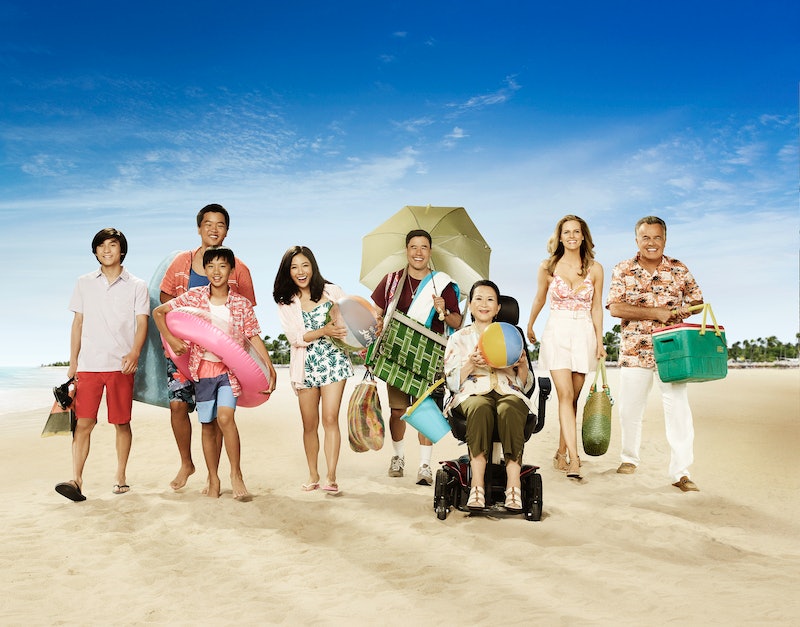 When it debuted in 2015, Fresh Off the Boat was only the second Asian American sitcom to exist. Now, it's coming to a close. As ABC confirmed in November, Fresh Off the Boat won't return for another season, which means its hour-long Season 5 finale will be its last episode.

"We couldn't be prouder of this game-changing show and the impact it has had on our cultural landscape," ABC Entertainment President Karey Burke said, per NBC. "The success of Fresh Off the Boat has helped pave the way for inclusion throughout the industry. [Showrunner] Nahnatchka Khan and her brilliant creative team have created an unforgettable series with an Asian American family front and center, something that hadn't been done in two decades."

With six seasons over the course of five years, Fresh Off the Boat is officially the longest running sitcom focused on an Asian American family. After news of the final season broke, actor Randall Park wrote in a long Instagram post that when he first started acting, he "would’ve been completely happy to be a funny neighbor or snarky co-worker. At the time, those were the kinds of roles that were available for folks like me."

But when Fresh Off The Boat came along, he continued, "It was humanizing ... For six seasons, I got to play a man of many dimensions: a loving father and husband, a friend, a boss… I got to laugh, to cry, to sing, to dance, to be a real human being."

Though Fresh Off the Boat has been the subject of minor controversy over the years — Eddie Huang, whose memoirs are the basis of the show, calls it an "ambiguous, cornstarch" adaptation of immigrant life, and actor Constance Wu expressed frustration when the show was renewed for Season 6 — it was still was a landmark for representation. In honor of the series' legacy, here are eight other sitcoms about Asian diaspora families to watch after it ends.

Kim's Convenience is a Canadian sitcom that depicts the Korean-Canadian Kim family, who run a convenience store in the Moss Park neighborhood of Toronto. The show is similar in structure and tone to Fresh Off the Boat, as it explores the culture clash between the older generation and the kids, who just want to seamlessly assimilate.

Stream it on: Netflix

Stream it on: Hulu.

Sure, this show is for kids, but it's also technically a sitcom about a biracial Asian family. The show follows 13-year-old Andi Mack and her best friends, Cyrus Goodman and Buffy Driscoll, as they attend middle school. It also won a 2018 GLAAD Award for being the first Disney Channel program to feature a coming out scene.

Stream it on: Disney+.

Awkwafina stars as Nora Lin in this scripted series based on her real-life in Queens, New York. Nora juggles the difficulties of being an adult while being raised alongside her cousin (Saturday Night Live's Bowen Yang) by her dad and grandma.

Watch it on: Comedy Central (you can watch the first three episodes on their website).

The Family Law is an Australian sitcom, and is based on creator Benjamin Low's real life. The story follows his dysfunctional Chinese-Australian family over the course of a long, hot summer on Queensland's Sunshine Coast. This is the most elusive of the shows to watch: currently it's only available for streaming in Australia on the SBS website.

Though it's a drama anthology series and not a sitcom, Kumail Nanjiani and Alan Yang's Little America is worth mentioning, as it follows various immigrant families navigating life in America; the first episode is about a young Indian boy who has to grow up alone after his parents are deported.

Finally, Deadline reported that ABC is eyeing a potential Fresh Off the Boat spinoff, tentatively titled Magic Motor Inn. A recent FOTB episode featured Bollywood actor Preity G. Zinta and comedian Vir Das as the parents of a young Indian girl who goes to school with Eddie. Though not an actual backdoor pilot, Deadline said that the episode is a "template for a proposed spinoff" that could then be picked up. Fingers crossed.