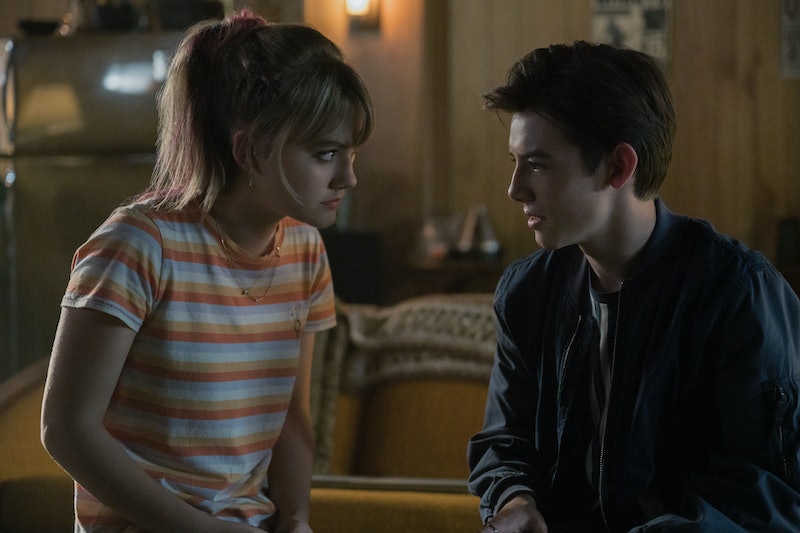 Netflix's Locke & Key begins with the Locke children moving from Seattle to their ancestral home in Matheson, Massachusetts, where they must begrudgingly settle in at a new school. The middle child, Kinsey (Emilia Jones), begins hanging out with a group of horror enthusiasts who call themselves the Savini Squad. Among them is new kid Gabe, who wasn't in the comics the show is based on, but ends up playing an unexpected role in the story. (If you don't want any spoilers, this is your warning to stop reading.)

Gabe is first introduced as a rather innocuous member of the Savini Squad, who's playing the monster in Scot's horror movie. Slowly, he begins to get closer to Kinsey and her magical keys. He tends to bring out the worst in her, seemingly being supportive but really just encouraging her worst impulses. Eventually, though, they start dating.

At the very end of the season, after Dodge has seemingly been banished to the dangerous other realm lurking behind the black door in the caves, it's revealed that Gabe himself is a demon — or is at least possessed by one. Considering he isn't in the comics, there's not exactly any precedent for this, or any clue as to where the storyline might go in a potential Season 2. That being said, there is a sneaky hint that could have tipped you off to the fact that he'd have a bigger role than it initially appeared — well, aside from him being generally suspicious.

It's possible Gabe was named after the comics' illustrator Gabriel Rodriguez, whose colleagues call him Gabe. If you're named after one of the creators of the story, you have to be important, right?

Beyond that, Gabe could end up being a presence in Pale Battalions, the new comic set in the Locke & Key universe that Rodriguez and original comics writer Joe Hill (notably the son of Stephen King) are currently working on. It's "set at the beginning of the 20th century," Hill revealed during a press event at the Netflix offices. "It will take the comic in a really interesting direction — a direction it's never gone before." Perhaps that direction will be into the other realm Gabe and Dodge are so interested in?

More like this
Nicola Coughlan Shared A Lady Whistledown Excerpt From ‘Bridgerton’ Season 3
By Grace Wehniainen, Alyssa Lapid and Sam Ramsden
The 'Andor' Timeline, Explained
By Gretchen Smail
'Firefly Lane' Season 2 Will Be The Show's Last — But There's A Twist
By K.W. Colyard and Grace Wehniainen
Twitter Is Pouring Out Some Zhampagne As ‘Schitt’s Creek’ Leaves Netflix
By Brad Witter
Get Even More From Bustle — Sign Up For The Newsletter