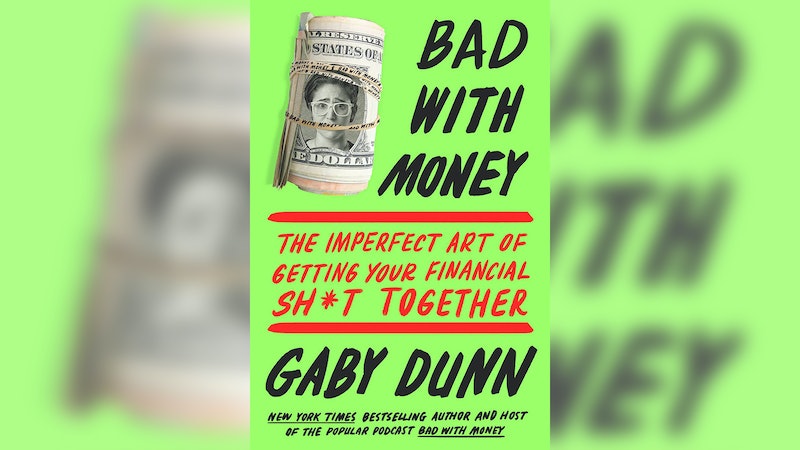 An impromptu trip to Paris isn't something too many people can afford with ease; Gaby Dunn certainly couldn't when she dropped $800 on a last-minute plane ticket to France in 2012. It wasn't her wisest financial decision, but these days, the 30-year-old podcaster and author is making very different choices. It hasn't been easy figuring out how to manage her money, and she chronicles this jagged road to financial literacy in her self-help-guide-meets-memoir, Bad With Money.

Dunn, who began her career as a journalist, worked at a variety of news outlets in her 20s while also maintaining a personal project on Tumblr called 100 Interviews. She went on to create a YouTube channel and podcast with her comedy partner, Allison Rankin, but despite her online success, Dunn still had a very big personal problem: student loan debt.

She was resolved to pay off her loans, and in the process of figuring out how to do so, she launched her own podcast in 2016: Bad With Money, which explores the emotional, social, and institutional factors that influence financial choices. In Jan. 2019, she released a book by the same name, and in it, talks about her money journey as a creative millennial living with bipolar II, who still has to pay taxes, save for retirement, make a will, and everything else.

Dunn introduces readers to the concept of “money scripts,” or the ways in which you’ve been taught to think about money by your family and community. In the book, financial psychologist Dr. Brad Klontz discusses how these scripts — like "money can solve all your problems and bring you happiness" or "you need to treat yourself when you are feeling sad" — can subconsciously affect how you make decisions.

This book made me realize that I had internalized so many scripts about writers and creative workers. I assumed that most people in my line of work earned so little money that they didn’t need to know about financial literacy, because all their money went straight to rent, food, and bills. This attitude wasn’t an informed perspective. I needed to recognize that I do benefit from understanding personal finance.

In the name of research, Dunn spoke about money with nearly every member of her family and many of her friends. What she found is that there are many different attitudes about saving and spending, even among people who spend much of their time together. Dunn self-educates throughout this journey: She learns what a stock is (she’s not ashamed to say she doesn’t understand them!) and researches how retirement accounts work.

I found it possible to look at my money scripts with a little more honesty and bravery because of Dunn’s disarming approach to talking about money. Readers won’t find complicated financial jargon in this book; she writes in-depth about what a credit score is, but she doesn’t pretend to know exactly which credit card is the best for every person.

After exploring the daunting personal finance world alongside another novice, I found myself with a set of action items that didn’t seem daunting: Set up a Roth IRA, save for unexpected medical expenses, and make freelance income goals. It’s not like I couldn’t do these things before, but my assumption that a just-barely-getting-by writer couldn’t or shouldn’t bother with financial literacy had been getting my way. This book is probably most useful for readers — like me — who haven’t spent much time thinking about financial literacy at all, and want someone to explain things to them from the beginning.

Dunn foregrounds experiences that other personal finance books may ignore; for example, she is bisexual, and she discusses the rise of the LGBTQ wedding industry in her chapters on how we spend money related to romantic love. She devotes an entire chapter to analyzing why systems are purposefully set up to be too complex and confusing for people to thrive financially, and why she sees some better paths forward through Democratic Socialist policies. "The structures we have collectively created and live in are not working for the vast majority of us, but we can also collectively build a different system," she writes. She recognizes the benefits of understanding money through current political and social systems, but she pushes back, too. While she advocates understanding the medical insurance system, for instance, she also believes that basic medical care should be a right and not something that will send people into deep debt for the rest of their lives.

I found it incredibly satisfying to be privy to the nitty-gritty of Dunn’s financial path — from having to sell her possessions online to afford an unpaid internship in New York City, to becoming a successful writer and actress in Los Angeles. (By “successful,” I mean that she mentions the $50,000 payment she and Allison received for selling a TV show script, and she refers to her finances as much better than they were even just a few years ago.) She outlines her spending, breaks down what she spent in a random month in 2017 line-by-line, and acknowledges that she still experiences dry periods due to the lump-sum nature of much of her income. I enjoyed knowing that even people who publish books occasionally spend, as she did, $600 on Amazon. “Not every month is this bad," she writes, "but man oh man!"

Near the end of her book, Dunn compares money to a character from the 1982 movie The Thing — the shapeshifting alien, a monster Kurt Russell struggled to defeat because it can look like anything and undermine his trust in his team. "Money is the alien," she writes. "We are all Kurt Russell.” After reading the book, I have the tools to make healthy, useful money choices for me, but I don’t feel the need to make the same money choices as other people. Most of all, I feel encouraged to figure it out.