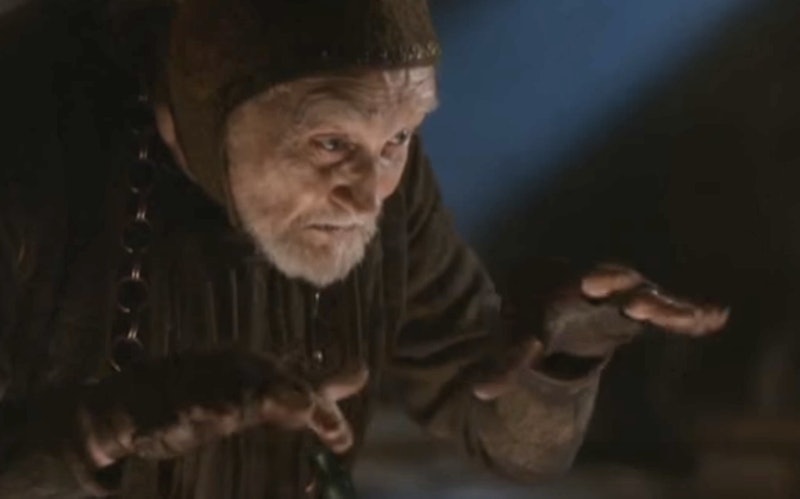 The actor best known for his role as Hallyne the Pyromancer in Game of Thrones and Leopold Mozart in Amadeus, Roy Dotrice, has died. According to the BBC, he passed away in his London home on Monday, October 16, and was surrounded by family. He was 94 years old. His role as Mozart's father in 1984's Amadeus made him more of a well known name, but his illustrious acting career in theater and television received many accolades over the years. His work reading for the Game of Thrones audiobooks is another hallmark of his career, and he voiced a record 224 characters.

Dotrice was born in Guernsey, one of the Channel Islands off the coast of Normandy. According to the Guardian, he escaped from the island in a boat with his friends, mother, and brother during the German occupation in 1940. Their family resettled on the south coast of England, and at 16 he joined the Royal Air Force as a wireless operator and gunner. His plane was taken down over enemy lines and he spent the rest of WWII in German PoW camps. It was while he was interned that he became fascinated with theater, performing shows for the other prisoners to keep them entertained. Once liberated in 1945, he started a touring theatre company and appeared in leading roles in shows throughout Liverpool, Manchester, and Oldham.

A character actor, Dotrice was decorated for his work across mediums. He first appeared on screen in the 1965 film The Heroes of Telemark, but his television acting career didn't gain momentum until 1969. That's when he appeared in Misleading Cases, and won a BAFTA for his role of Albert Haddock. He also starred in the award-winning film Amadeus, which took home many Oscars, including Best Director and Best Screenplay. The film raised his profile as an actor, and he also picked up an Emmy award for a recorded performance of Harold Pinter's The Caretaker in 1985. He also won a Tony Award for a 2000 revival performance of Eugene O'Neill's Moon for the Misbegotten on Broadway.

Contemporary audiences might recognize the British actor from his smaller roles in films like Mr. and Mrs. Smith, Hellboy II: The Golden Army, and the TV series Angel. He also found a new fanbase for his reading in the popular audiobooks for George R. R. Martin's A Song of Ice and Fire series. These books would, of course, go on to inspire the Game of Thrones show. Dotrice's narration of the literary series won him another, even more unique award. By voicing a boggling 224 characters, he secured a place in in the Guinness Book of World Records in 2004.

George R.R. Martin, a friend of Dotrice, reportedly wanted to include the actor in Game of Thrones from the beginning, according to The Guardian. He was originally cast as Maester Pycelle, but backed out due to health issues. The star wasn't able to appear until the second season, when he took on the part of Hallyne. It would be one of his final roles.

In 2008, he was appointed Officer of the Most Excellent Order of the British Empire by the Queen of England. When not working, the actor reportedly enjoyed fishing, soccer, and baseball.

In addition to professional accomplishments, the star also started a family with his wife, Kay Newman. They were married for 60 years before she passed away in 2007. Together they had three daughters, Michele, Yvette, and Karen. In a statement given to the BBC, Dotrice's family said he "died peacefully on Monday October 16 in his London home surrounded by family, including his three daughters, grandchildren and great-grandson." Dotrice will be survived by his extended family, and his acting legacy on stage and screen.