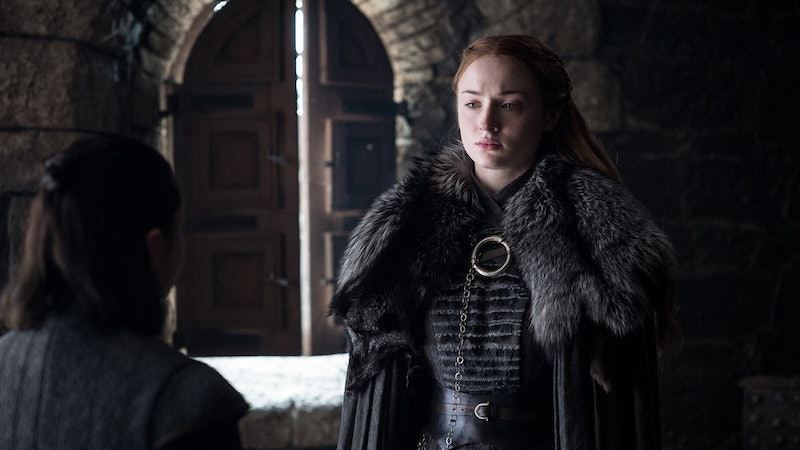 With only a few days left to find out who ends up on the Iron Throne, it seems as if the show's creators may have left a clue about who will make it to the end of the series. In a recent interview with Rolling Stone, Game of Thrones creators hinted that Sansa Stark will survive the end of the series, while speaking about the ways that the events of the show have changed her and her sister, Arya, over the past decade.

While speaking with the magazine about Sophie Turner and Maisie Williams — who play Sansa and Arya, respectively — showrunners David Benioff and D.B. Weiss reflected on how much Sansa's character has changed and grown over the course of the series, as a result of the many horrors she's had to endure. "Sansa started out the show as a very traditional girl from a noble family with very traditional expectations for her life," they wrote in an email to Rolling Stone. "Those expectations were horribly upended, and the ensuing experiences forced her to question so many things that she took for granted: her innocence, her trust, her assumptions about the way the world works."

They continued, noting that no matter what has been thrown her way, Sansa has come out stronger. "Although some very bad people did their best to break her, none of them could — and she left her terrible experiences stronger than she went into them. Now she is one of the most formidable people in the story." In fact, the newer, shrewder Sansa has become a major power player in the fight for the Iron Throne in the show's final seasons.

Sure, calling her one of the most "formidable" characters is not an outright confirmation that Sansa will survive — or even that she will take the Iron Throne from Dany in the series finale — but the pair's cryptic comments do seem to imply that fans should never write off the Little Bird when it comes to the struggle for power. As Tyrion himself remarked earlier in Season 8, "Many have underestimated [Sansa]. Most of them are now dead." It seems the eldest Stark sister will always find a way to come out on top when the dust settles.

In addition to reflecting on the way that Sansa has grown from an innocent girl to a political power player, Benioff and Weiss also opened up about Arya. Interestingly, they explained how she has managed to remain one of the show's protagonists, despite killing more people than almost any other character in Westeros. "Arya may have a higher body count than almost any other major character on the show, but she’s almost always been justified in the violence she’s done in one way or another," the pair explained.

Like her sister, Arya's quest for blood and revenge is directly a result of all of the trauma and violence she's had to endure over the course of the series, which has changed her outlook on the world completely. "And thinking about her circumstances… That’s a childhood you wouldn’t wish on anyone," they said.

"She’s maintained a kind of moral center throughout," they added. "We see her as an extremely resilient child who made the best of an extremely difficult childhood to become a singular woman." That moral center could also be what drives her to kill Dany in the series finale, as many have theorized, but we'll have to wait and see.

While fans won't know until the very last episode of Game of Thrones airs on May 19, it seems that based on this interview, the Stark girls might just make it out of the fight for the Iron Throne alive and well. After all, as Turner herself has said, "the pack survives."